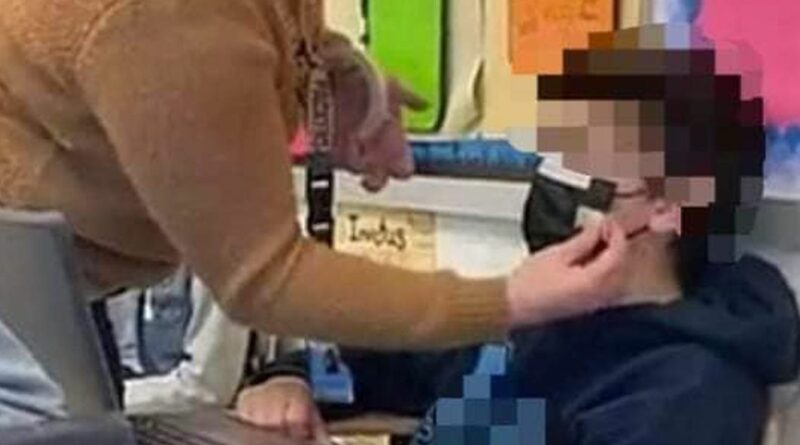 A US school teacher has sparked controversy after an image of her taping a face mask to a student went viral as it caused outrage online.

The image appear to show a woman taping a black face mask, required in certain schools due to coronavirus, onto a male student as he sits at his desk with a laptop.

The incident took place at a school in the North Penn School District in Pennsylvania but it is unknown who or when the photo was taken.

A local group called North Penn Stronger Together shared the photo on Facebook, and revealed the incident happened at Pennfield Middle School.

The group has asked parents to contact the administration and raise the incident at the upcoming board meeting.

In the post, they said: “Pro-mask or anti-mask, I hope we can all agree that taping masks to children’s faces crosses the LINE. This was not a joke for the child or the parents.

“I am calling on the North Penn Neighbours for Progress and North Penn School District to address this photo of a Pennfield Middle school co-teacher taping a mask to a child’s face to district parents and families ASAP.”

The response online to the incident has forced North Penn School District to respond to concerns and apologise in a statement.

“After an immediate investigation, it was determined that while the incident was isolated and no malice was intended, the actions of the teacher were entirely inappropriate and unacceptable, no matter the context.

"We understand that the act of taping a mask to a student’s face is concerning to many and apologise that it occurred. The matter is serious and it is being addressed with the employee.”

The statement did not confirm the school where the incident took place.

Numerous people have spoken of their outrage over the actions of the teacher on social media.

One user said: “Horrified! Since when is it okay to ‘tape’ things to a child's face.”

While another said: “Respect to this beautiful child and his family. This is shameful.”