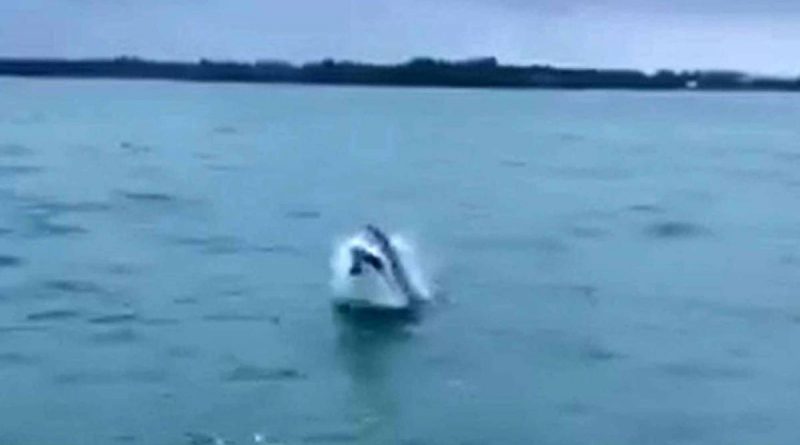 A marine scientist has issued a message to Kiwis who are hoping to enter the waters this Easter holiday period.

After another shark sighting close to shore in the Bowentown area, a leading shark scientist says he would not go swimming in the area.

Dr Riley Elliott told Heather Du Plessis-Allan on Newstalk ZB while there have always been the odd sightings of great whites, he’s increasingly concerned about the behaviour shown from the latest incident.

“I got into sharks because I was afraid of them … I’ve spent last two decades studying them and I’ve come out with a healthy respect and understanding of how they behave.

“What we’ve seen in the Bowentown area this summer is a cause for concern.

“Not just because of the number of juvenile great whites, but I’m starting to see the behaviours in the recent video which was put up which was like great whites hunting seals around a seal colony.

“But we are talking about one of the most popular swimming destinations in the country.”

In January, Hamilton 19-year-old Kaelah Marlow died in a shark attack at Bowentown.

It is understood she was dragged from the water alive after the attack and paramedics administered CPR on the beach to no avail.

There have been multiple sightings and captures of great white sharks in the area since.

On Monday, a Waihī fisherman had an up-close look at the speed and power of a great white shark.

Josh Lonergan was fishing on a boat off the coast of Bowentown, less than 1km from Anzac Bay, when he spotted the shark chasing a fish he was reeling in.

“The last trevally I caught, I had a shark chase it in. I had a kahawai there so I chucked its head out on a bit of light line and got the camera ready.”

Following Lonergan’s footage and the increase of great whites in the area, Elliott has warned people should exercise extreme caution.

He says locals should be aware of the sharks’ changing and predatory behaviour.

“More than a handful of interactions have occurred [with great whites], they’ve identified 11 individuals. It’s not just 1. There’s at least 11 there and that is unheard of in the area.

“This is where sharks live and where they belong. It’s an absolute privilege to have a great white in the habitat and it reflects a healthy environment.

“At the same time, people shouldn’t be going into the Easter break unknowing and fearful and not understanding. Until we start researching this area that’s where we are sitting right now.

“There’s been a real hotspot at that Bowentown channel … At the end of the day every time you go into the ocean you are stepping into the sharks’ domain.

“New Zealand has not regularly been a hotspot for great whites. What I would say is go into the water with an awareness of your surroundings … Right now we know there’s a lot of great whites, there’s been a tragedy, there has been encounters we’ve got away with.

“But the latest video has shown the predatory strategy of a learning great white.

“It’s not an area I would be recreating. If you want to be safer, stay closer to shore, stay in shallower water and swim in waters patrolled by lifeguards. But nothing is bulletproof when it comes to the ocean.”

Elliott said the real point of interest was whether these great whites were there all the time, where they came from and what the future looked like.

He appealed to the Department of Conservation for permission to launch a project investigating great white shark distribution in the northeast of the country in November last year but has been told his application is still being processed.

He stressed more needs to be done to learn about great whites and educate oceangoers.

“I’ve got a lot friends in the area and they are concerned, they are scared. They want answers.

“You say ‘are you willing to take on the risk of that environment?’ Where we need to step up is allowing people to understand that risk through knowledge by research and investigation.

“We’re seeing videos and encounters. It’s fine if you’re on a boat, but we have to remember there was a fatality there this summer and that should not be brushed under the cover.”