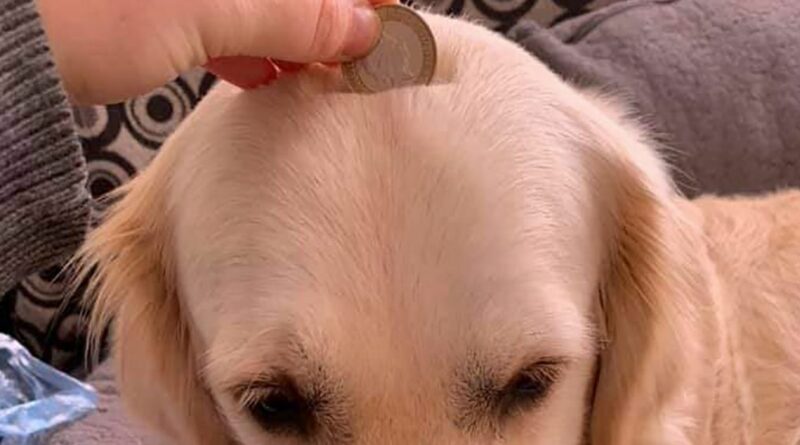 A golden retriever was left looking sorry for herself after a shaving mishap left it resembling a money box.

Her owner shared the hilarious mistake on Facebook to the group Golden Retrievers UK where dog lovers responded in fits of laughter.

Not only is the space shaved the same size as a coin drop but its location on the dog's head is exactly where one would drop a few quid in for Guide Dogs or the RSPCA outside a supermarket.

Instantly recognising what the indent on her pet's head hair looked like, Rach Sharpe from Gloucester held a two pound coin over the gap as though to drop it in.

She asked the community: "Has anyone else had a shaving accident?"

Before going on to explain how a joke went wrong when the unsuspecting golden retriever moved.

Rach continued: "Was trimming my husband beard and she came up behind me I was like oh yeah I’ll shave the dog (jokingly) and she moved her head and now has this line in her head "She looks like a money box and I can’t even look at her without crying."

After a couple of years on social media a Reddit user has re-shared a screengrab of the original post to the amusement of the blessedimages page.

A second wrote: "There should be treats in the shape of coins."

And a third joked: "A penny for her thoughts?"

Other puns thrown in on the thread included: "Doge coin" and "I need her 2 cents for various reasons."

A guilty dog has been caught red-pawed on a security camera causing £4,000 worth of damage to a home whilst its owners were out.

Whisky, a young Labradane – a cross between a Labrador and a Great Dane – was spotted turning the cold kitchen tap on.

The water ended up flooding the house leaving Whisky's owners a very unpleasant surprise when they returned home.