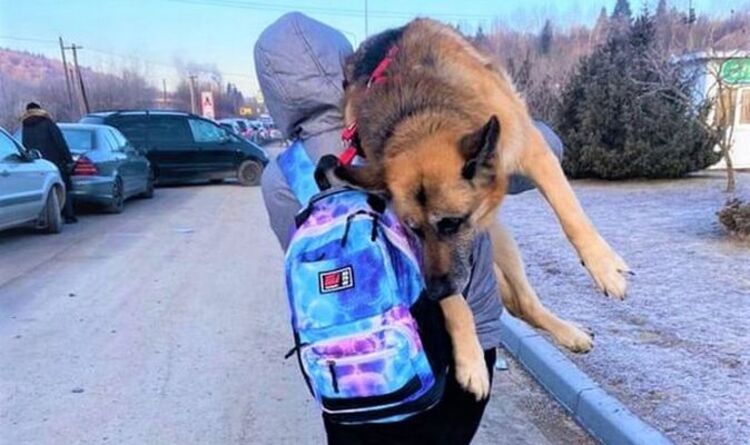 Ukraine: 'We are in third world war' says Lesia Vasylenko

The photo was taken by the dog’s owner, Alisa Teptiuk, as she fled her hometown and headed towards the Polish border. The German Shepherd, Pulya, is pictured being carried by Alisa’s husband, Dmytro as they walked the final stretch of the journey. Ms Teptiuk said that she “couldn’t leave her behind”, as “Pulya is family”.

She described the German Shepherd as a “symbol of love, devotion, determination”, adding: “She represents our family, the lives we had, the lives we’ve left behind. Pulya is our one constant in all of this madness.”

Ms Teptiuk and her family fled Kyiv by car, but hit heavy traffic when they were just 10 miles from the Polish border.

They decided to walk the rest but the 12-year-old dog began to struggle.

Speaking to DogsLive, Mr Teptiuk said: “We packed five adults, four children and our two dogs into a Peugeot 307 car and we drove out of Kyiv.

“We filled every bit of space, my mother, myself and my sister, our two husbands, the four children and two big dogs Pulya and Kolt.

“We drove for 16 hours to a village about 90 miles from Kyiv and then we stopped.”

It was at this point that the traffic became gridlocked and they decided to walk.

Ms Teptiuk told Belfast Live: “As we got closer to the border there were a lot of cars queuing and we were told it would take the next three, or may five days to get to the border by car.

“We didn’t want to sit in a queue without shelter, open to the air, open to attack.

“So we decided to walk the last 10 miles. We left at 4am. It was minus seven degrees.

“It was a hard trip around mountains and rivers. Our kids were crying because it was so cold.

“I wanted to cry too, I could feel the tears travelling to my eyes but I couldn’t allow myself to cry, I couldn’t give up.

“It had been my idea to go to the border, we were almost there and we just had to keep going.

It was during the final walk to safety that Ms Teptiuk took the picture of Pulya, being carried by her husband.

She said: “Pulya was fantastic. She walked a lot of the way but she’s old and she needed to stop to rest and then she struggled to get back on her feet and she was getting slower and more tired.

“I stopped cars to beg for help but everyone refused.

“They told us to leave the dogs, to save our family. They didn’t understand, our dogs are our family too, Pulya comes too.

“Pulya is no less family than anyone else. She has been through everything with us, good times, happy days, hard times, sadness and now war and exile.”

Ms Teptiuk added: “So we walked on and when Pulya got tired Dmytro lifted her onto his shoulder and he carried her.

“I took a photo without thinking about it too much. I suppose I just wanted to capture the moment.

“But now I know how special it is. It shows the world our love and devotion. We’re just an ordinary family who love each other.

“When she could walk no more Dmytro lifted her. She was so calm.

“I think she understood we needed to keep moving and she needed to let us help her.

“She’s a beautiful dog. She reacted calmly to being lifted, she didn’t struggle.

“You have to remember she knows we’re her family too and she completely trusts us.

“We made it to the border, all 11 of the family including the dogs and we rested for a few hours.

“We could see rows of red tents and a big crowd. A woman asked me to take her 11-year-old daughter – someone was waiting for her in Poland. I agreed of course.”

While Ms Teptiuk and Pulya are safe and well, her husband and his brother-in-law had to turn around and return to Ukraine as a result of the mobilisation order, prohibiting all Ukrainian men between the ages of 18 and 60 from leaving the country.