Shepparton community leaders are demanding an urgent assurance that day-13 testing will be stepped up as thousands of residents forced into quarantine at the start of the city’s COVID-19 outbreak prepare to end their isolation this week.

The community leaders say authorities must ensure there are sufficient resources for residents to receive their day-13 tests as the city struggles with a shortage of essential workers. 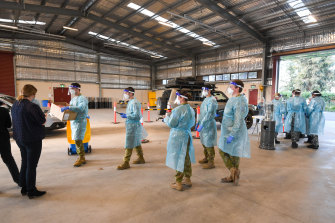 Many of those employees, including supermarket and healthcare workers, are in home quarantine.

Committee for Greater Shepparton chief executive Sam Birrell said on Monday that all resources must be available “to ensure that day-13 tests can happen and no one stays in isolation any longer than they need to”.

Tests on day 13 are crucial because they allow those who have been isolating to be released from quarantine once they receive a negative result. Thousands of Shepparton residents will reach the 13th day of their confinement period this week.

Victoria’s 73 new cases announced on Monday included nine connected with the Shepparton cluster, which has now reached 100 cases, with more infections expected to be confirmed in coming days.

Testing resources were overwhelmed early in the Shepparton outbreak after a positive case was recorded at a local primary school and parents were ordered to pick up their children immediately, isolate and get tested.

Authorities were forced to stagger tests rather than allowing everyone who needed one to come forward at once.

At least seven schools have since become exposure sites and up to 20,000 people have been required to isolate in the regional city, causing havoc for local workplaces and delaying supermarket food deliveries.

“The most important thing is that people who’ve been in isolation for 14 days get out as quickly and promptly as possible for their wellbeing,” independent MP for Shepparton Suzanna Sheed said 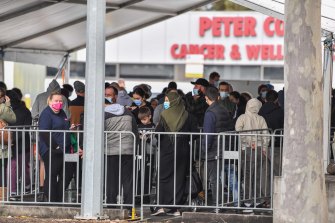 Ms Sheed said she was meeting with health officials to discuss the community’s needs and allocation of resources late on Monday.

About 500 workers from Goulburn Valley Health were required to isolate in the latest outbreak and the military was called in to assist with testing last week.

Mr Birrell said local businesses were struggling with much of their workforce in isolation.

“The economy needs workers back as soon as possible,” he said. “There are some key people in businesses isolating and production has had to slow.”

Community groups in Shepparton have united to deliver hundreds of boxes of food to people unable to leave their homes – particularly after many supermarket workers were also required to isolate and could not deliver food.

A Health Department spokesman said plans were in place to ensure everyone who needed a day-13 test would get one in a “timely way”.

Goulburn Valley Health chief executive Matt Sharp said some people were already receiving their day-13 tests but Thursday and Friday were likely to be the busiest days this week.

He said work was well under way on preparations for the tests, and it was possible they would yield further positive cases. So far more than 21,000 people in Shepparton have taken coronavirus tests. 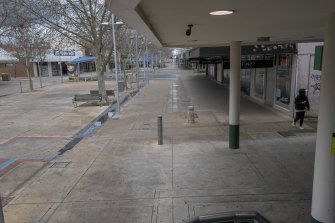 But Mr Sharp said local data indicated people were waiting more than two days on average from the onset of symptoms to get tested.

At least six COVID-19 patients needed to be transferred out of Shepparton for treatment as their condition deteriorated while “a small number of people” received treatment locally.

The looming day-13 tests in Shepparton come after the Wharparilla Lodge at the Echuca Community for the Aged was listed last week as an exposure site.

Chief Health Officer Brett Sutton said it was good news that none of the residents or staff at the aged care facility had subsequently tested positive, although the quarantine period would remain.

“They still need to go through that quarantine period. They could still test positive,” he said. “But it looks under control and clearly there’s been no transmission detected yet.”

Professor Sutton said authorities would consider easing restrictions for regional locations where there had been no transmission and where they were not at risk.