Two grandparents who have been shielding since March were finally able to share a loving embrace with their grandsons with the aid of inflatable polar bear costumes.

Barbara, 71, and Clive Walshaw, 73, from Bramley, in Leeds, West Yorkshire, got to hold their three grandchildren Quinn, six, Morgan, eight, and Mackenzie, 14, for the first time since March 1, after surprising them with the costumes.

The couple had originally planned to spend Christmas ‘together’ on a Zoom call with a laptop at the end of the dinner table.

But Mrs Walshaw stumbled upon the inflatable polar bears while Christmas shopping online and realised she had found a way to hug her beloved grandchildren safely, on December 25. 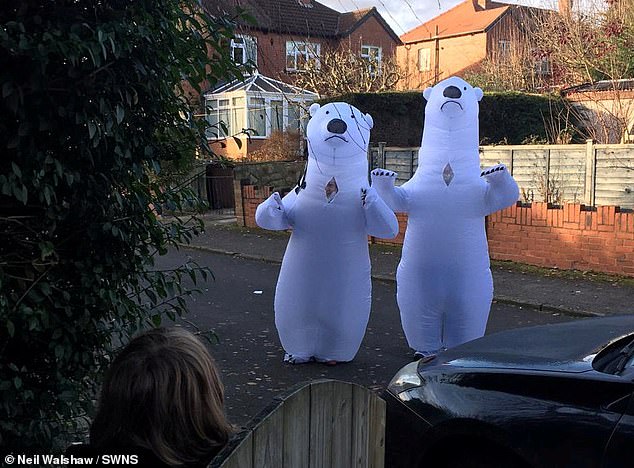 Grandparents Barbara, 71, and Clive Walshaw, 73, from Bramley, in Leeds, West Yorkshire, got to hold their three grandchildren Quinn, six, Morgan, eight, and Mackenzie, 14, on Christmas day

The ingenious grandmother said it was the ‘best £15 she had ever spent’ as it brought so much joy and a ‘pure Christmas spirit’.

In a heartwarming scene, the couple snuck up to their grandchildren’s home in Kirkstall, Leeds, and hugged them while protected by the 6ft 6in costume.

‘The littlest one kept asking if she could come. It was really hard on all of the boys.

‘We normally spend Christmas day with them and we wondered what we were going to do with all that’s been going on.

‘We wanted to be careful because if we got poorly it wouldn’t just be us that were poorly, the boys would feel like they were responsible for it – which isn’t what we wanted.

‘But the costumes worked really well. Totally enclosed. It was the best idea I’ve ever had I think.

‘The younger boy was a bit overawed by these massive polar bears but when he realised it was us it was so lovely. So many cuddles. It was amazing. It was about six minutes.

‘This year has been so hard. It was out of this world, those six minutes, just pure Christmas joy and something that cannot be described. 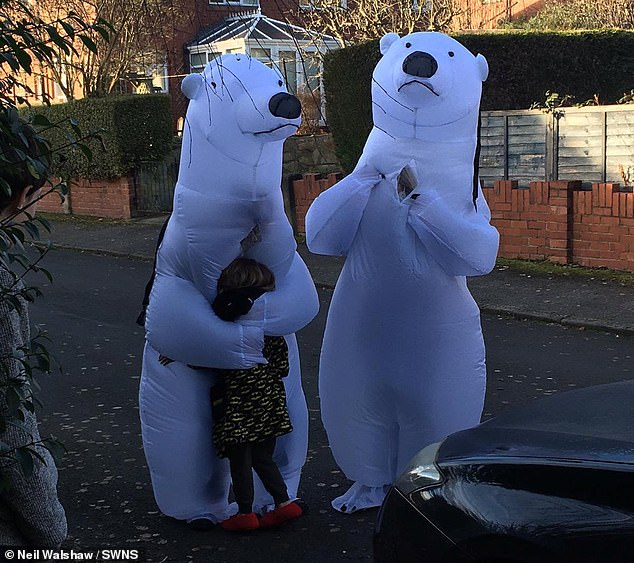 ‘Everyone was so happy in those six minutes. And we laughed and cried. I loved it’

The tight-knit family normally spend two to three days a week together, and the grandparents even have a spare room for the boys.

Their son, Neil Walshaw, 45, a councillor, said it was the best hug his boys ever had and a memory they would ‘never forget’.

At around noon on Christmas Day, Neil and his wife Hazel, 44, told their three boys that they had heard a rumour that there were polar bear sightings in Kirkstall.

When they walked out they spotted their bumbling grandparents bouncing over in a massive polar bear costume.

Youngest son Quinn was so shocked when he saw his grandparents walk up to their home that he sprinted back into the house and out again to make sure it was real.

Neil said: Quinn had to run back into the house and back out to make sure it was real.

‘Best hug I’ve ever had. The grandkids will never forget it. It was fantastic. It was my amazing mum’s idea.

‘We’ve not had any physical contact since then and it’s been so hard as they’re really involved grandparents.

‘My mum and dad used to see them multiple times a week and they even stayed over loads. 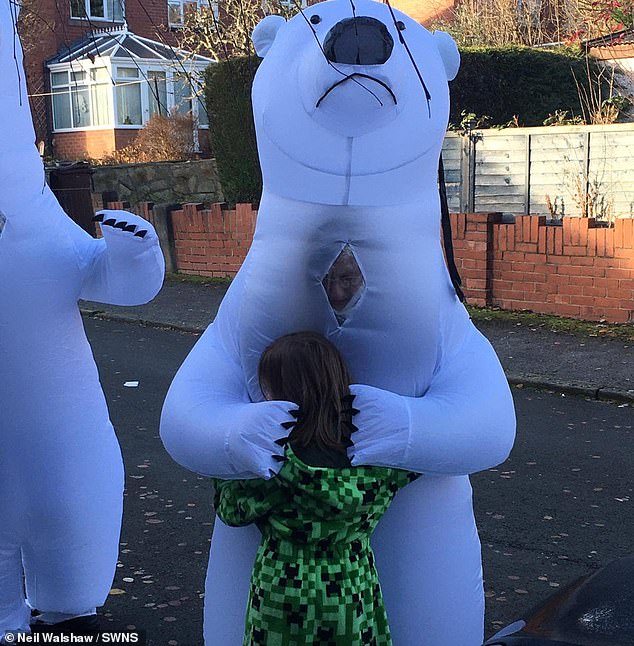 Mrs Walshaw, who stumbled upon the inflatable costumes while shopping online, said it was the ‘best £15 she had ever spent’

‘This year has been so tough but after seeing them, we were buzzing all day.

‘They are the best grandparents in Leeds. They’re simply fantastic.’

In October, people living in Leeds, Bradford, Calderdale, Wakefield and Kirklees were plunged into Tier 3 lockdown restrictions amid a rise in coronavirus cases across West Yorkshire.

The restrictions meant pubs, bars and restaurants not serving substantial meals were forced to close and the mixing of households was also banned.

Leeds City Council’s chief executive Tom Riordan said a support package of £46.6 million had been negotiated with the Government for the region in addition to the Tier 2 funding already agreed. He said there would also be an additional £12.7 million for testing and tracing.

But the leader of Bradford Council, Susan Hinchliffe, said the new measures would be ‘damaging for businesses and jobs’ and said the financial support agreed was not enough.