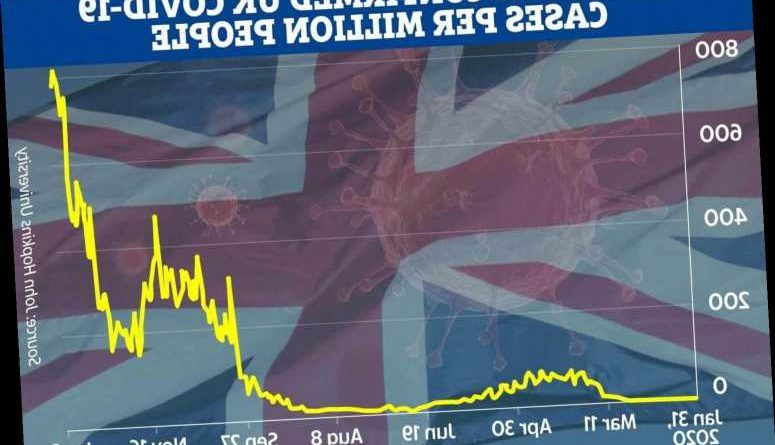 SHOCKING graphs show the Covid cases curve is almost vertical, as the new strain of the virus spreads rapidly.

There were 812 new cases per million people reported in the UK on January 3, which has grown four-fold from 220 a month prior. 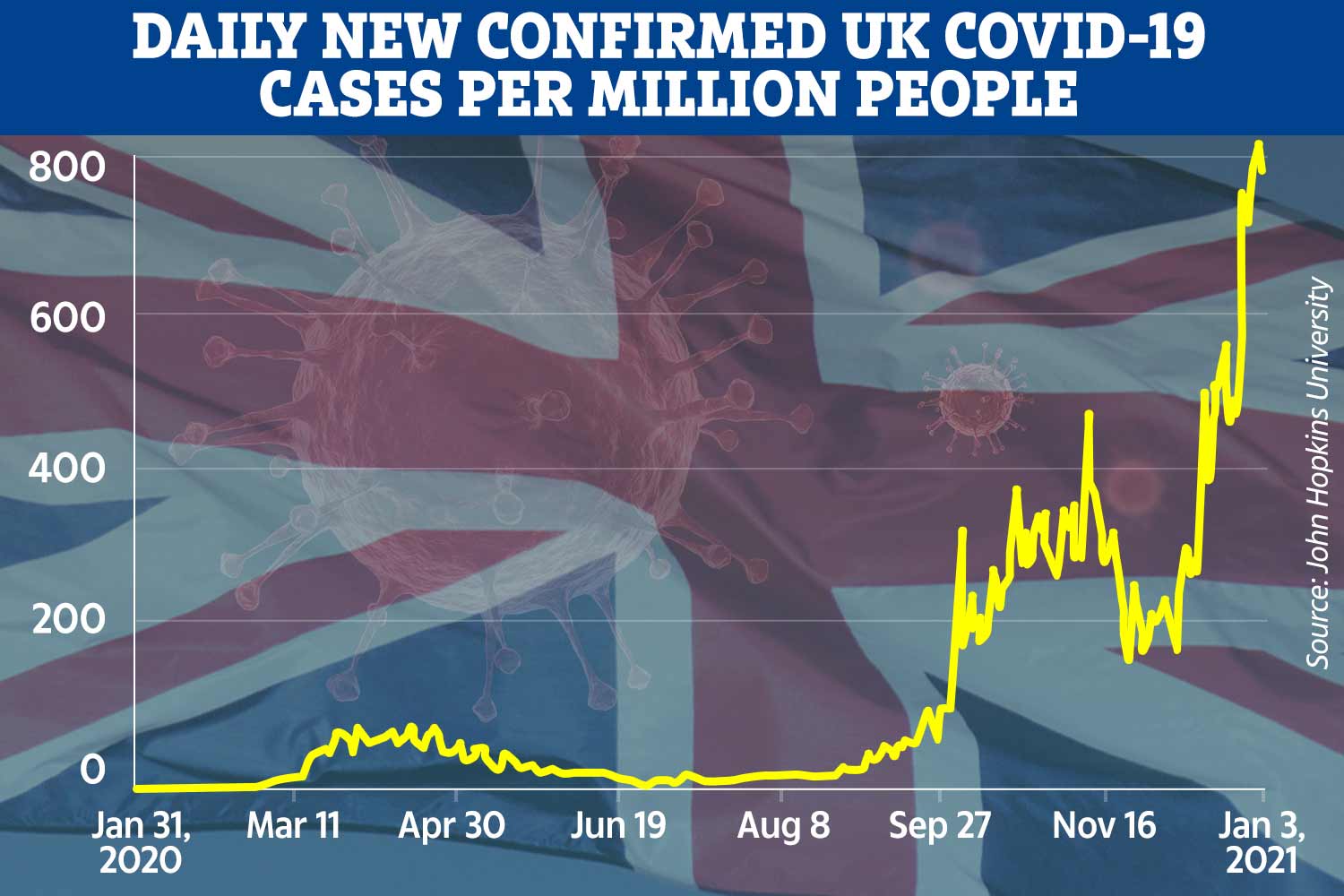 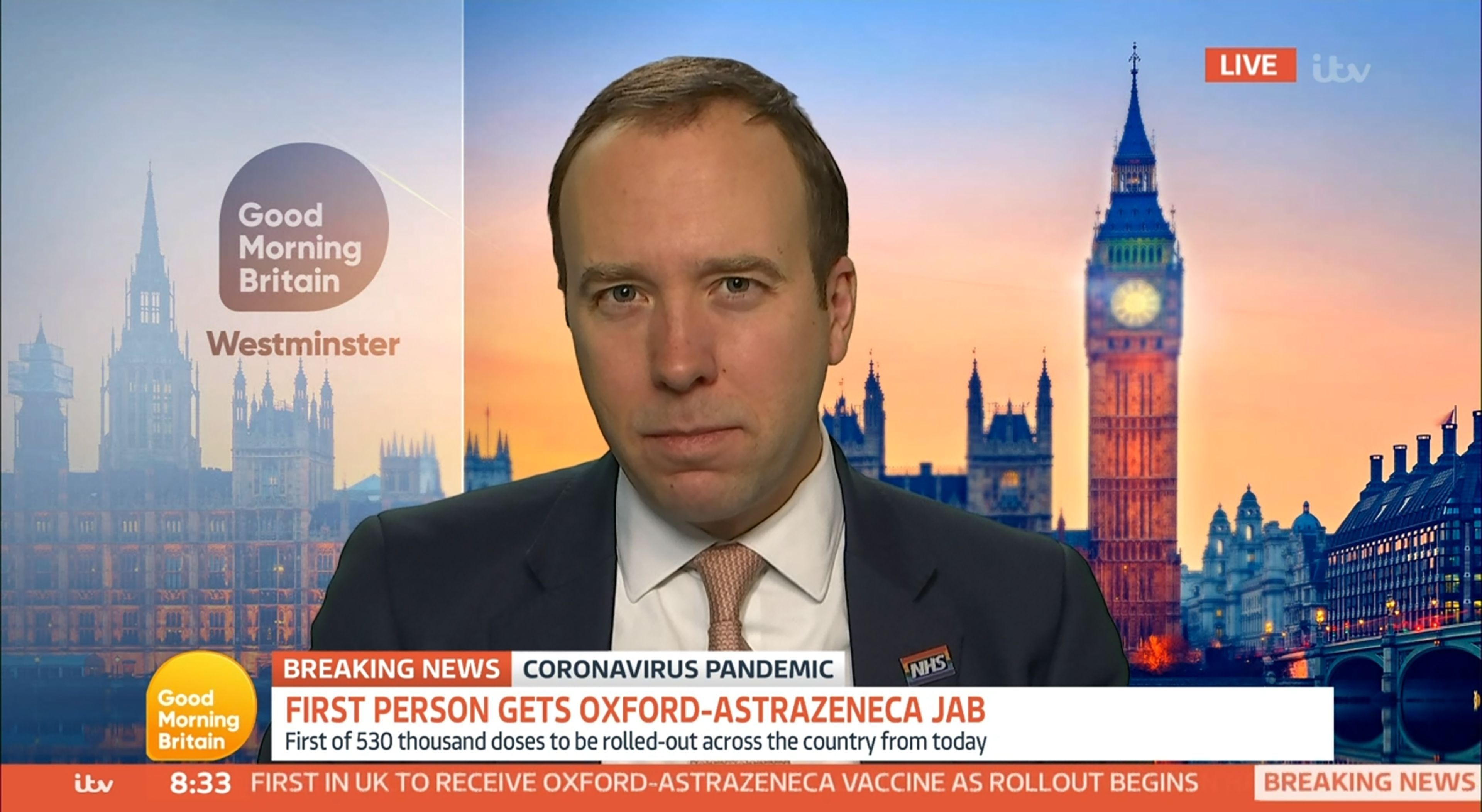 Daily confirmed cases are far exceeding those reported in the first wave of the spring.

However, the time periods are not comparable because there was significantly less testing back then compared to now.

The new strain spreads faster than the original one, which has now dwindled in numbers by comparison.

The Health Secretary Matt Hancock this morning would not rule out a national lockdown, and suggested all Tier 3 will be plunged into Tier 4 at least.

Presented with shocking graphs on Good Morning Britain this morning, Mr Hancock said the new variant was “much much harder” to control because it is so easily caught.

He said: “This new variant is much easier to catch, it is much more transmissible, and we’re now seeing the effect of that in lots of different parts of the country, unfortunately.

“And it means that whereas the old Tier 3 was able to contain the old variant, that is proving increasingly difficult in all parts of the country.”

The Prime Minister has warned “the virus is really surging across the country”, and more may be needed to slow the spread of the mutant strain.

Boris Johnson warned that the public “should not, in any way think that this is over” due to the positive news on vaccines.

The Oxford/AstraZeneca jab is being administered from today after MHRA approval on December 30. Brain Pinker, from Oxford, was the first to be jabbed at 7.30am this morning.

But only 500,000 of the 100million doses secured for the UK are available this week, with concerns the NHS will be unable to deliver a speedy roll-out to end the draconian measures to control the virus.

Data from John Hopkins University shows the sudden surge in cases over the past month caused by the new variant.

After the November lockdown to suppress the second wave, cases lulled for a brief period of time to around 200 cases per million people.

Then they began rising sharply in early December, doubling to 400 cases per million people within two weeks.

The latest R number is estimated at 1.1 to 1.3. Anything over 1 means the outbreak is growing, rather than shrinking.

That’s despite the fact three quarters of England are now in Tier 4. 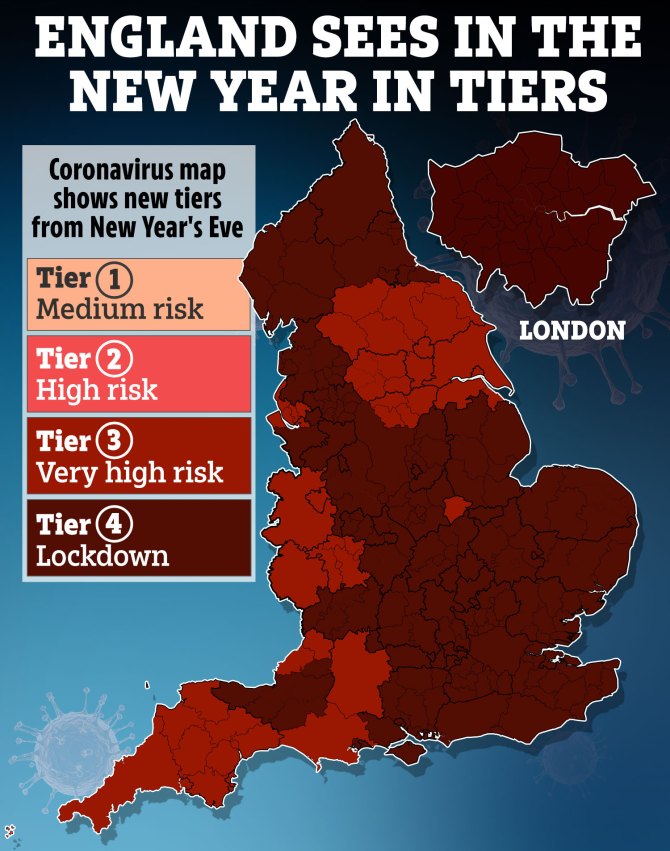 Northern Ireland and Wales are in lockdowns to try and stop the rampant spread of the new variant, and Scotland on the brink of a total shutdown with talks to be held today.

Hospital admissions have also soared above the the darkest days of the first wave in April.

In England, there are currently 23,823 patients being treated for Covid in hospital, according to the latest data up to December 28, compared to 18,974 on April 12.

The latest data shows a 33 per cent rise in the number of confirmed coronavirus patients in hospital in England between Christmas Day and January 2.

Professor Stephen Powis, national medical director of NHS England, told BBC Breakfast “the NHS is under severe pressure, particularly in London and parts of the South East where the new variant has been accelerating in transmission”.

It comes as pressure for an immediate full lockdown grows, with Sir Keir Starmer last night calling for a shutdown within the next 24 hours.

Mr Hancock hinted at the potential for a new national lockdown, saying the Government is prepared to act “rapidly” where necessary.

The Health Secretary told ITV’s Good Morning Britain: “We are prepared to take the sort of action (lockdown) if that is what’s necessary.”

“When we found out that this new variant spreads so much faster, we moved within just over 24 hours to bring in the Tier 4.”

Asked whether he is prepared to introduce a new national lockdown, Mr Hancock replied: “We look at the data all the time, and we will take the action that is needed based on public health advice.” 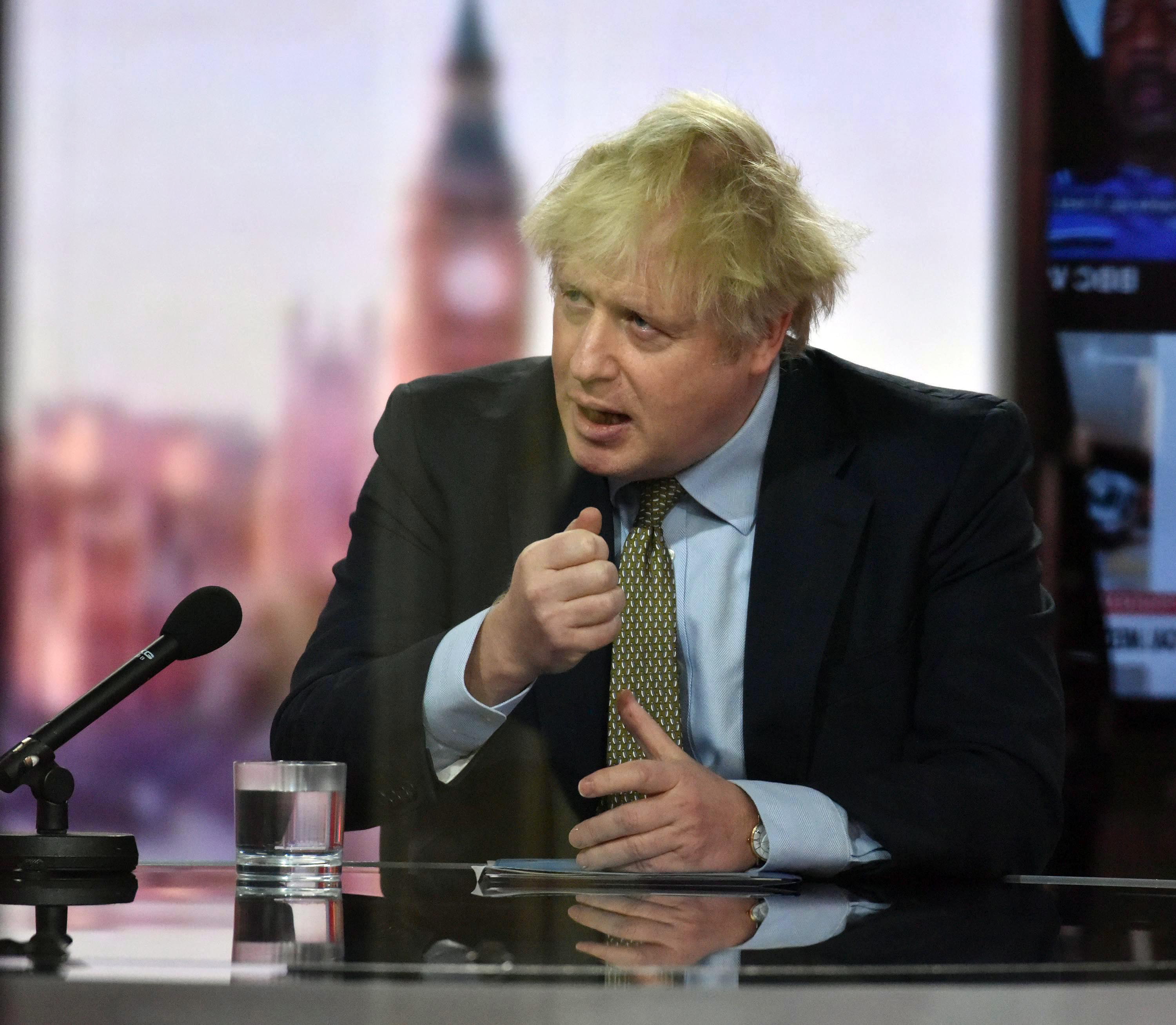 The PM has previously warned Brits they'll face tougher rules in the coming weeks and refused to rule out 'Tier 5' restrictions or a full national shutdown.

Speaking on The Andrew Marr Show on Sunday, he said “yes” when asked whether it may be necessary to bring in new tougher restrictions.

He said we need to be “realistic” about the pace of which the new variant is spreading across the country, but did not reveal any imminent new measures.

However he did not rule out curfew, a return to a single hour exercise outdoors per day, or a national lockdown.

The new variant heats up the race between the spread of the virus and getting people vaccinated with the Pfizer or Oxford/AstraZeneca jab.

The first people will receive the Oxford jab today, a “pivotal moment” in the fight against the virus, Mr Hancock said.

However, it is expected to take several months for even the most at-risk people to be given their vaccine, meaning restrictions are far from over.

Some 15 million people are expected to be jabbed by February, and 24 million by Easter. But only 530,000 doses will be available from today. 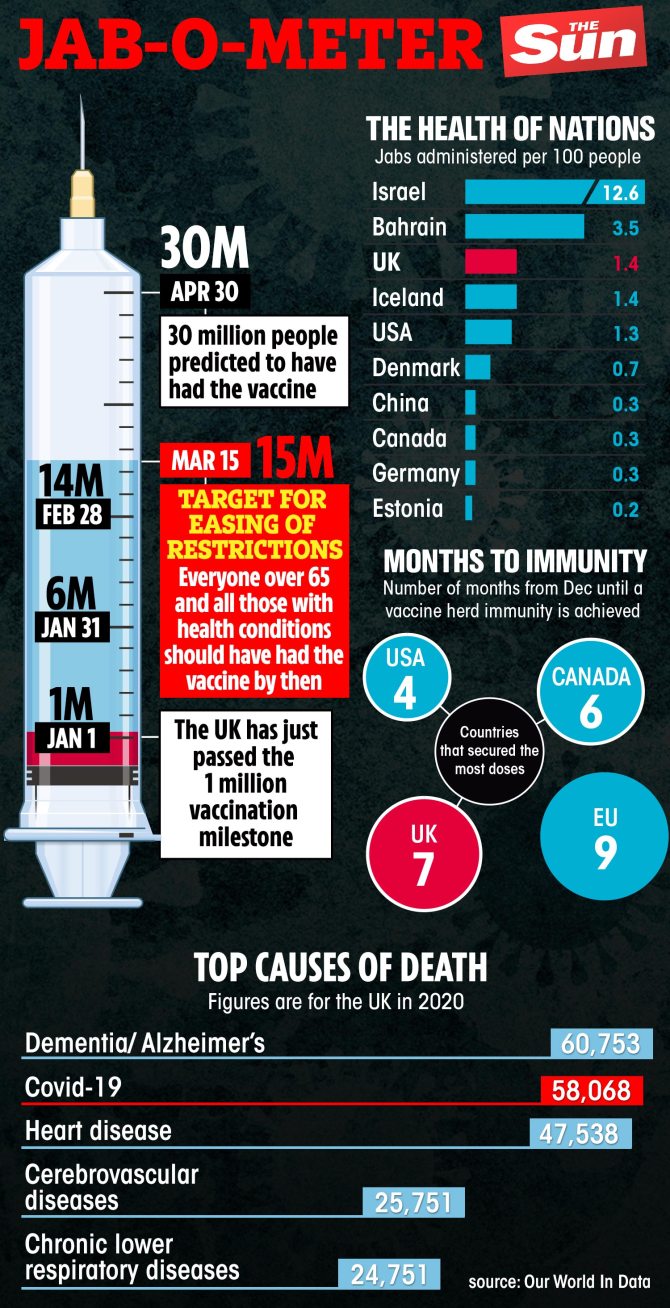 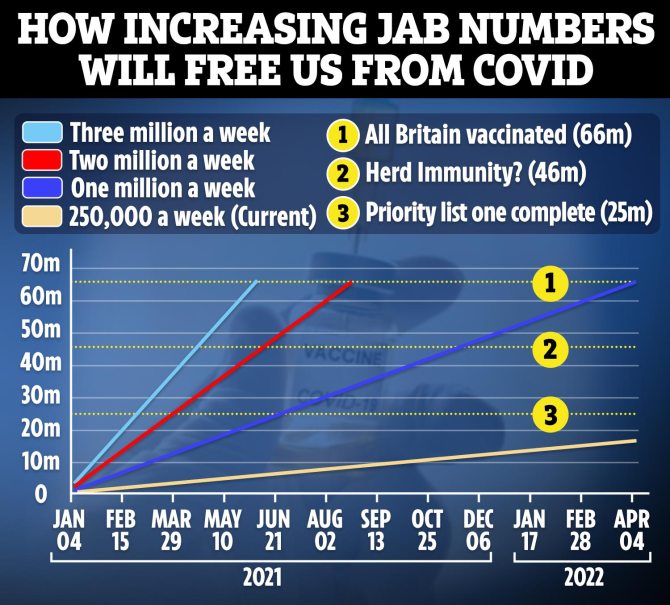 Scientists have warned at least two million people must be vaccinated per week in order for it to substantially reduce Covid deaths in 2021.

Hospitals at six NHS trusts across London, Brighton, Oxford, Morecambe and Nuneaton will be the first to give the vaccine.

It will reach more than 500 GP surgeries and community centres by the end of the week — with the Prime Minister saying “we are going as fast as we can”.

Mr Hancock believes the country will be out of the pandemic "by spring" with two vaccines in the UK’s armour against the virus.

Regulators outlined a new dosing regimen following the approval of the Oxford vaccine. People won't need their second dose for another three months – aimed at speeding up the roll-out.

Nearly one million people have received their first dose of the Pfizer jab, according to the Government coronavirus dashboard.