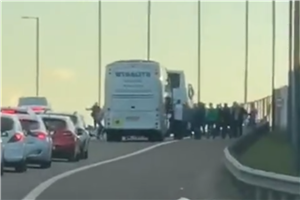 THIS is the shocking moment two groups brawled on a MOTORWAY before a football match.

The men were seen swinging punches as drivers queued on the M74 at the turnoff for Hapden Park in Glasgow – where Saturday's Scottish League Cup semi-final between Rangers and Hibernian was being played. 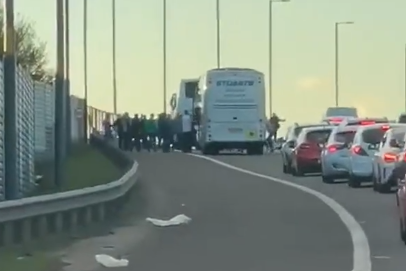 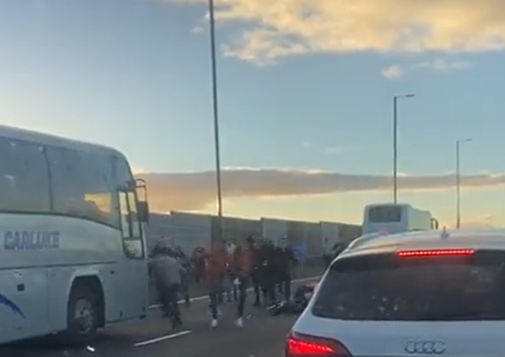 Two coaches appear to have stopped on the inside lane of the motorway -bringing traffic to a standstill on the busy road.

A large group is seen gathered to the left of the buses in the footage as a gobsmacked motorist films them.

Suddenly, the group begin to rush through the gap in the parked vehicles and pour out onto the main road – as some of the "fans" kick out at each other.

The car's passenger is heard gasping in shock as the fight continues in front of her.

Brawlers then rush over to the left of the bus where they mob together in a blur of punches and kicks.

A clip of the fight from another angle shows a man wearing grey shoving someone else to the ground before the mass punch-up resumes.

One wrote: "It was good of the bus drivers to stop in a live carriageway to let them settle their differences."

Some blasted their behaviour, with one Twitter user dubbing the fight a "total embarrassment".

The semi-final match kicked off at 4pm – with Hibernian emerging as 3-1 victors.

The Edinburgh side stunned as Martin Boyle netted a hat-trick in the first half to send them into a 3-0 lead.

Scott Arfield pulled a goal back for the Rangers shortly before the interval – but Hibs were able to hold onto their two-goal lead and progress to the final against Celtic.

It comes after a major brawl broke out at a Glasgow city centre pub on Saturday, as masked thugs launched chairs. 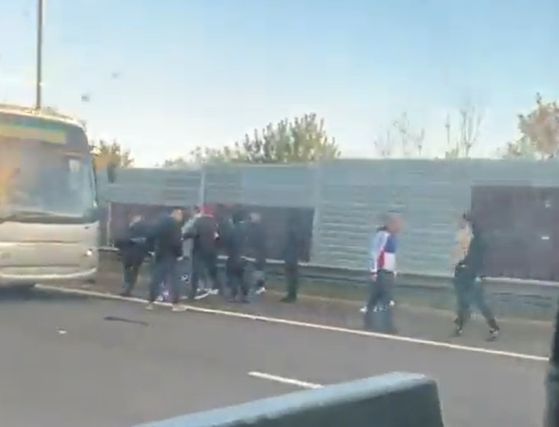