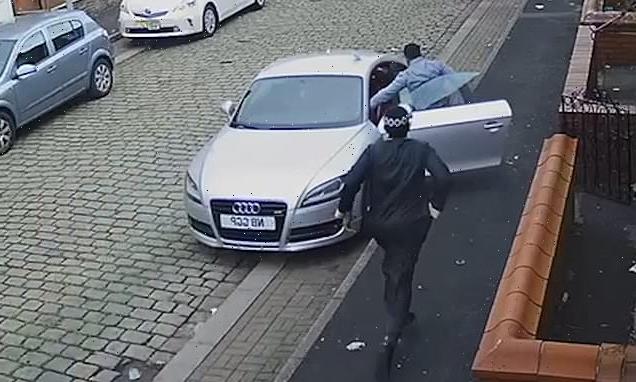 This is the shocking moment an ‘out of control’ Audi TT crushes its owner after careering into reverse before smashing into two parked cars on a residential street.

The bizarre ordeal, captured on CCTV and shared with MailOnline, starts by showing a man wiping the roof of the silver Audi TT Roadster DSG while speaking to a neighbour.

But things take a jaw-dropping turn when he opens the door and appears to turn the ignition. The car then darts backwards at speed down the hill as the frantic owner clings on and tries in vain to stop it.

It is not until the Audi crashes into two parked cars that the drama comes to a end, with the man laying injured on the ground as people rush to his aid.

The incident happened on Arnold Street, Bolton, Greater Manchester just before 2pm on Friday, May 6.

‘He tried stopping the car which I know is silly of him but I guess a natural instinct reaction took place,’ a witness said.

‘He wanted to somehow get in the car and apply the brakes but unfortunately got ran over by the car and the driver’s side door completely damaged his head and face.’

The man suffered various cuts and bruises and was taken to hospital by a friend.

In the video he can be seen on the ground as the one of the wheels rolls over his leg before his upper body gets stuck by the open driver door.

His shoe flies off when he rolls backwards, leaving him face down in immense pain on the street in Bolton.

He was said to have ‘seriously injured’ his head, both arms, right leg and bruised back.

The Audi only managed to stop once one of the cars it hit in the pile-up reached a brick wall, with the windscreen wipers still moving.

His neighbour rushes to try and help and quickly beckons other people to do the same, with the Audi owner’s mother and older brother soon running out to support their loved one.

The footage has been shared to find out if any other owners of Audi vehicles have had similar problems.

‘It’s impossible for an automatic car just to reverse into gear and just gain that much momentum without the driver having his foot on the brake first,’ the source said. 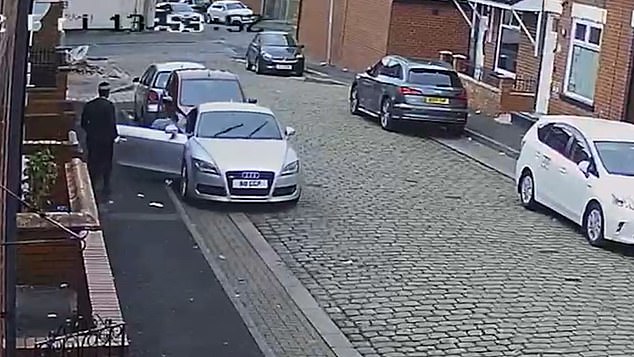 Within seconds, the vehicle jumps into action and darts backwards and continues to reverse down the residential street – all while the owner keeps his arm in as he tries to stop the car 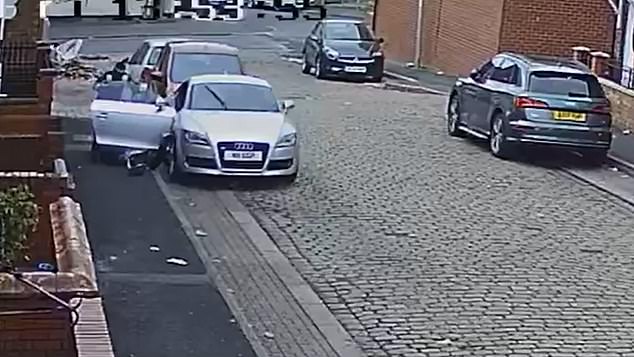 The Audi failed to stop and charged backwards into two parked vehicles down the road. The frantic owner got dragged down the street as the silver car gained momentum, as he ran to try and keep up with the speed it was running at. 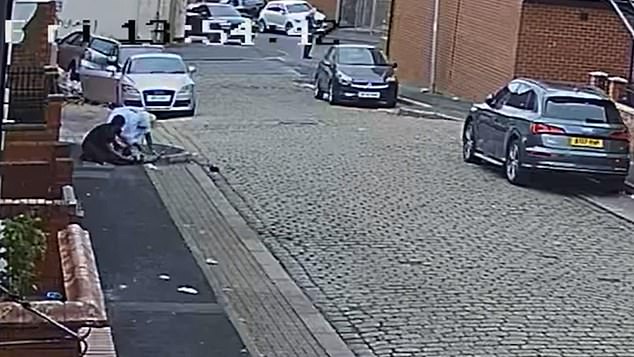 He fell to the pavement, tumbled, his legs then got run over by the front wheel before his upper body got stuck by the open driver door. His shoe flies off when he rolls backwards under the driver door, leaving him face down in immense pain on the street in Bolton

‘The automatic handbrake was still on too. Bizarre. There were massive injuries but the car can be easily replaced.’

MailOnline have reached out to Audi for a comment.

Greater Manchester Police attended the scene and the North West Ambulance Service were called before the man was taken to hospital by one of the people at the incident.