In the clip, the female customer gets into an argument with the staff when her fast food order takes too long – ending in the McDonald’s employee hitting her several times and pulling her by the hair. 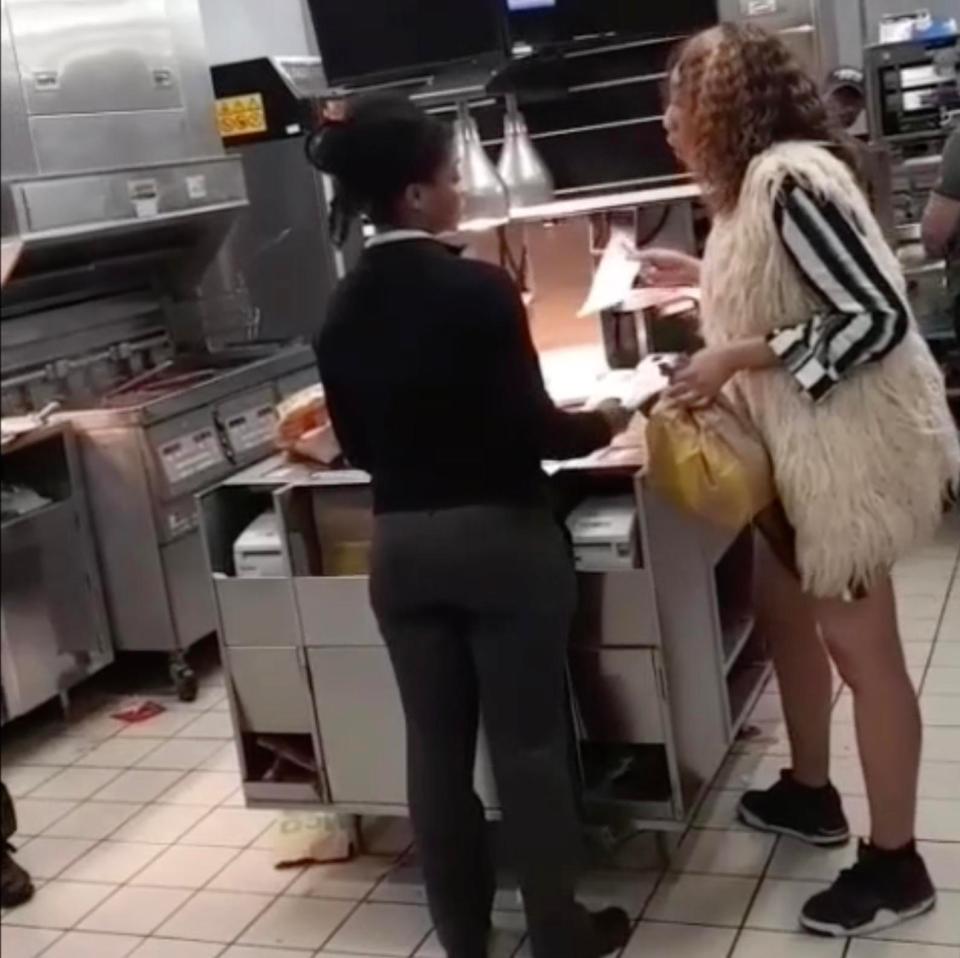 The footage shows the McDonald’s worker trying to strike the customer further as the security guard comes between them – but both are restrained before the situation escalates.

The incident took place at around 1am on Saturday April 28 at in the McDonalds branch in Butterfly Walk Shopping Centre, Camberwell, South London.

The woman – who recorded the footage and asked only to be named as Antonia – said that disturbing event ended with the customer being escorted out of the McDonalds store.

A spokesperson for the Metropolitan Police told The Sun Online they were not called to the incident. 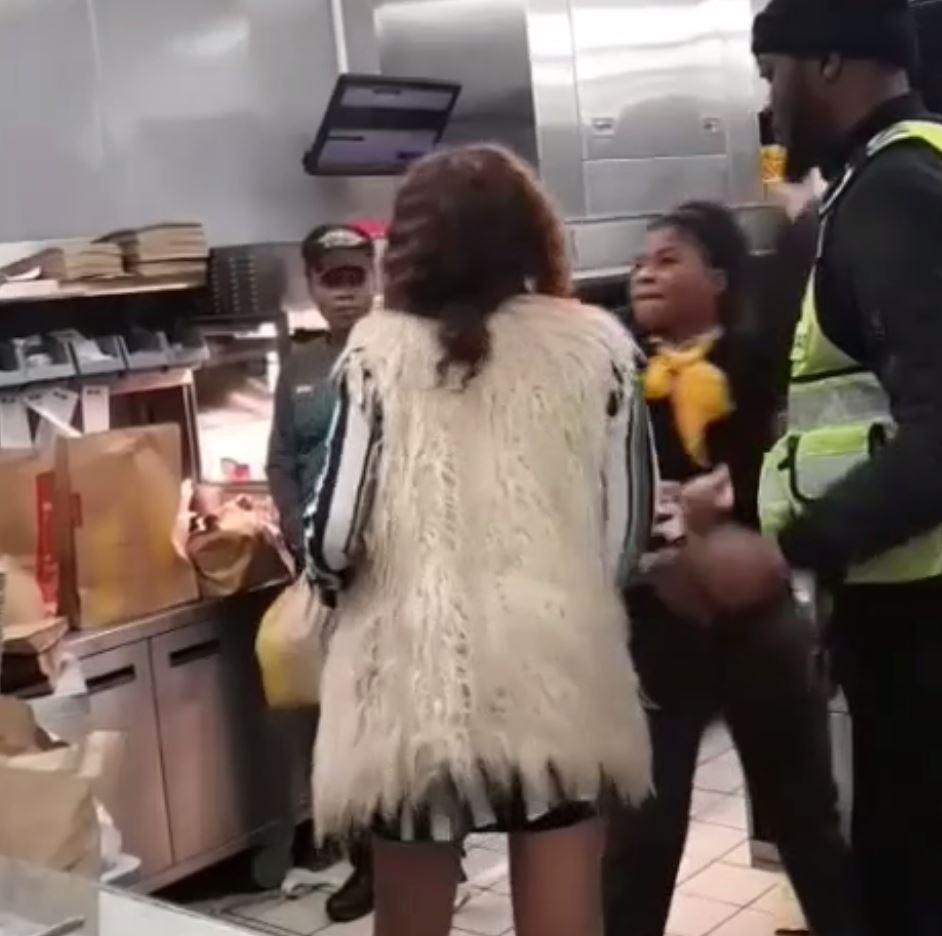 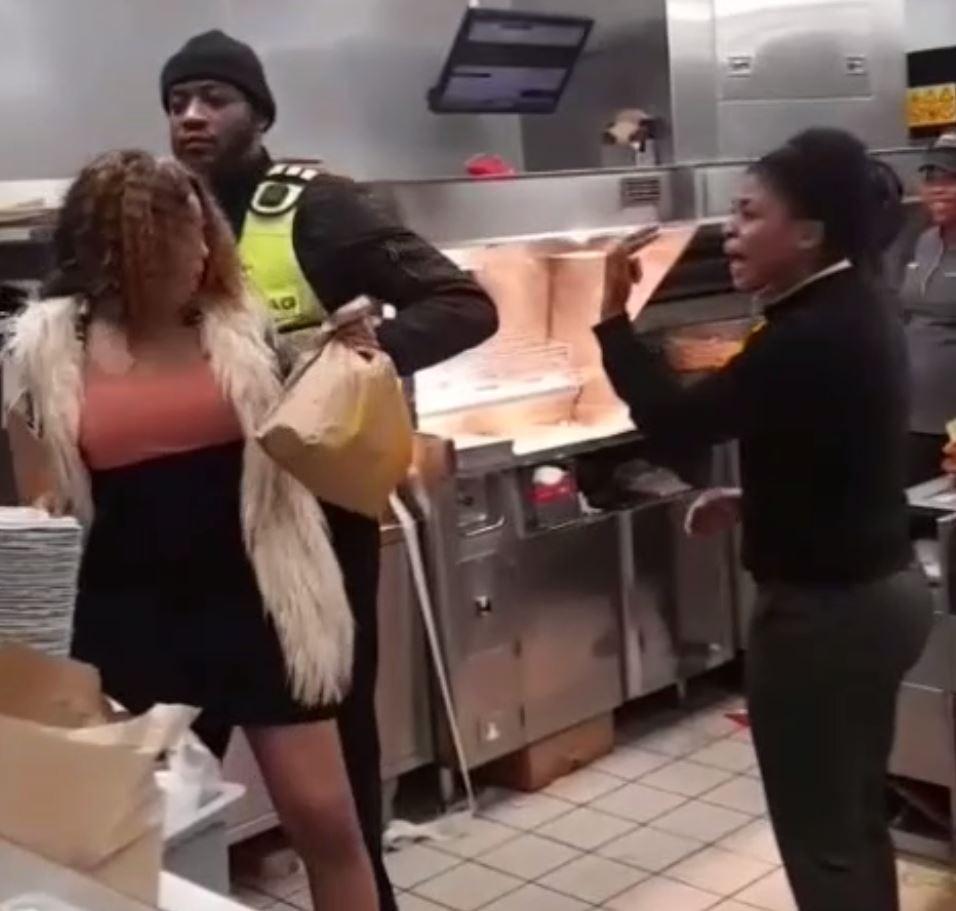 Antonia said: “As I walked in to the McDonald's branch, the girl was already behind the counter.

“From what I could hear, she was upset that her and her friends’ order was taking too long so she decided to go behind the counter and get the food herself.”

The customer engages in an argument with the McDonald’s employee and steals her receipt from behind the counter, appearing to tell her "deal with this [receipt]" as a friend tells her to "come out" of the kitchen area.

Security staff attempt to escort the customer out – but before she's led away from the area, the customer turns and flicks the McDonald's employee on the head, allegedly because the worker was “rude” to her. 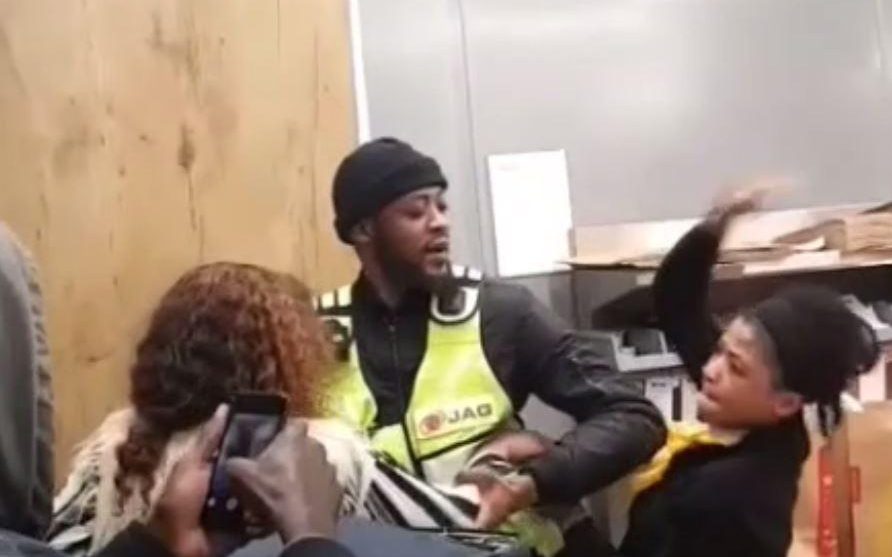 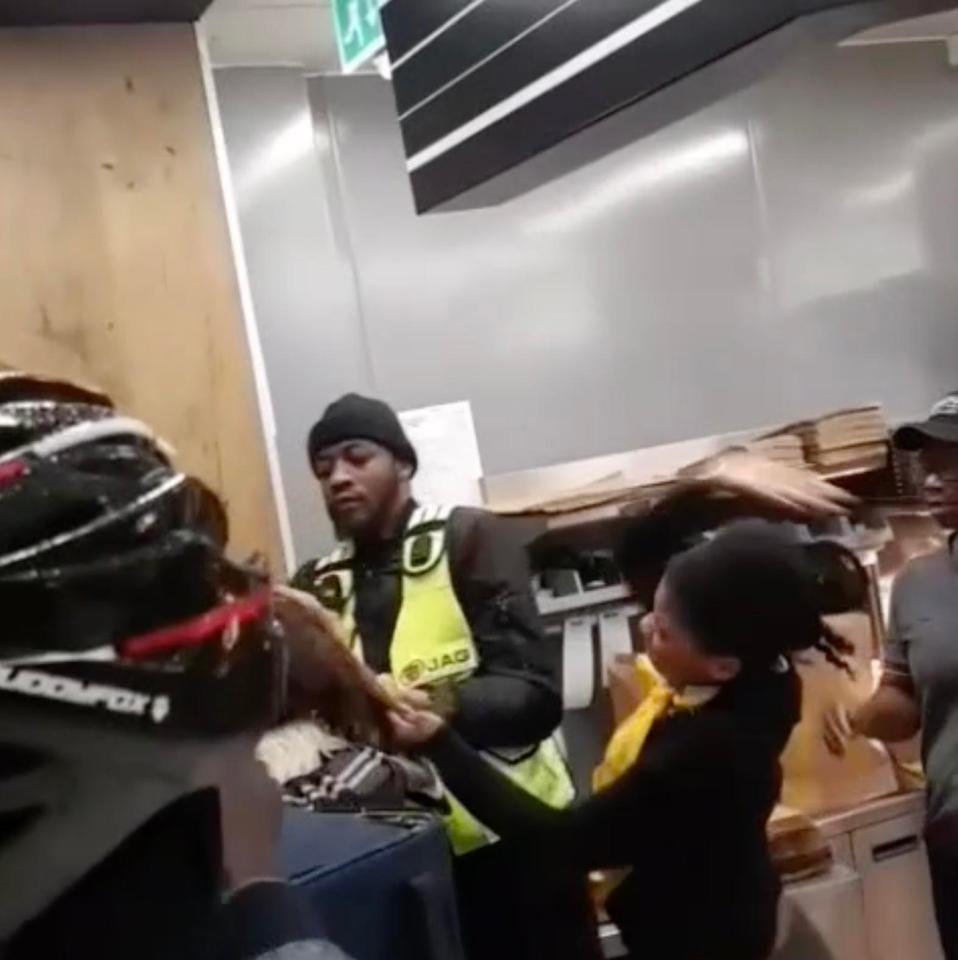 The enraged worker then pushes away the customer's hand before striking her in the head in front of shocked customers.

As security tries to forcibly remove the young woman, she starts shouting: “She slapped me. Is she mad!”

Sandwiching the security guard as he attempts to remove the customer, the McDonald’s employee appears behind him to try and keep striking the girl.

The two hurl insults at each other with the customer screams: “You f**king bitch. F**k off fam!” 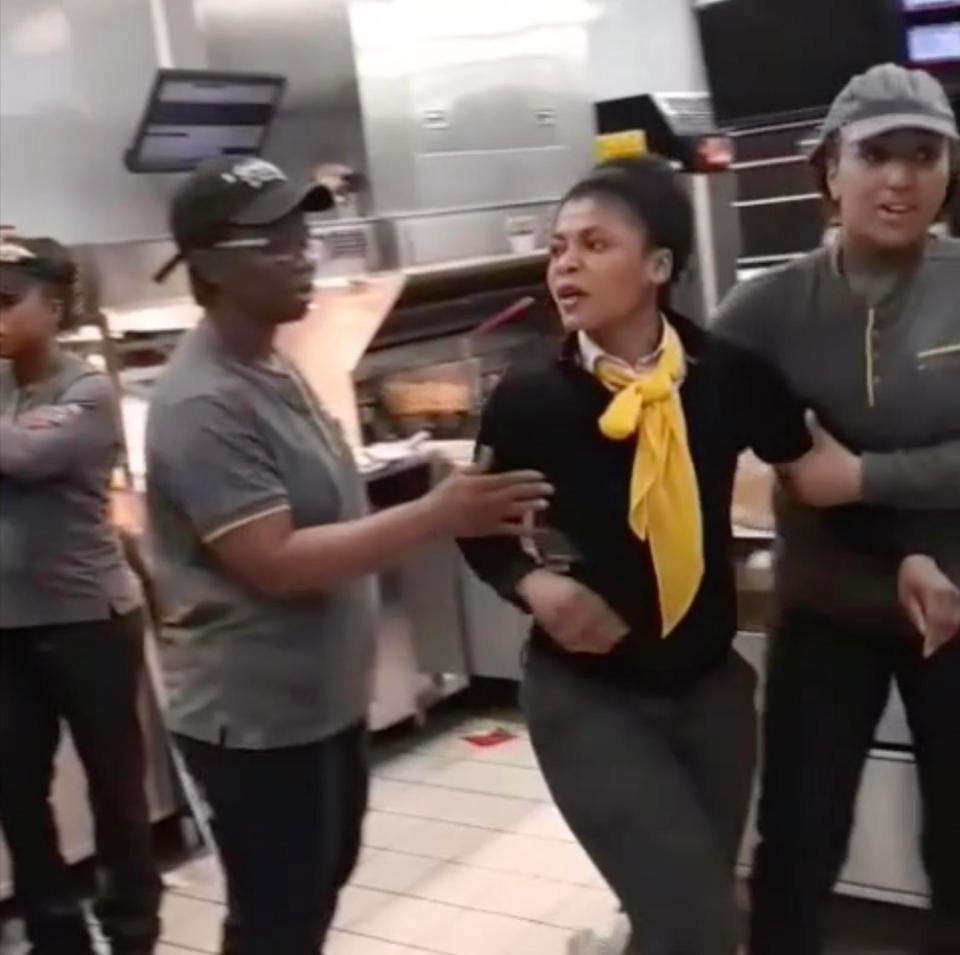 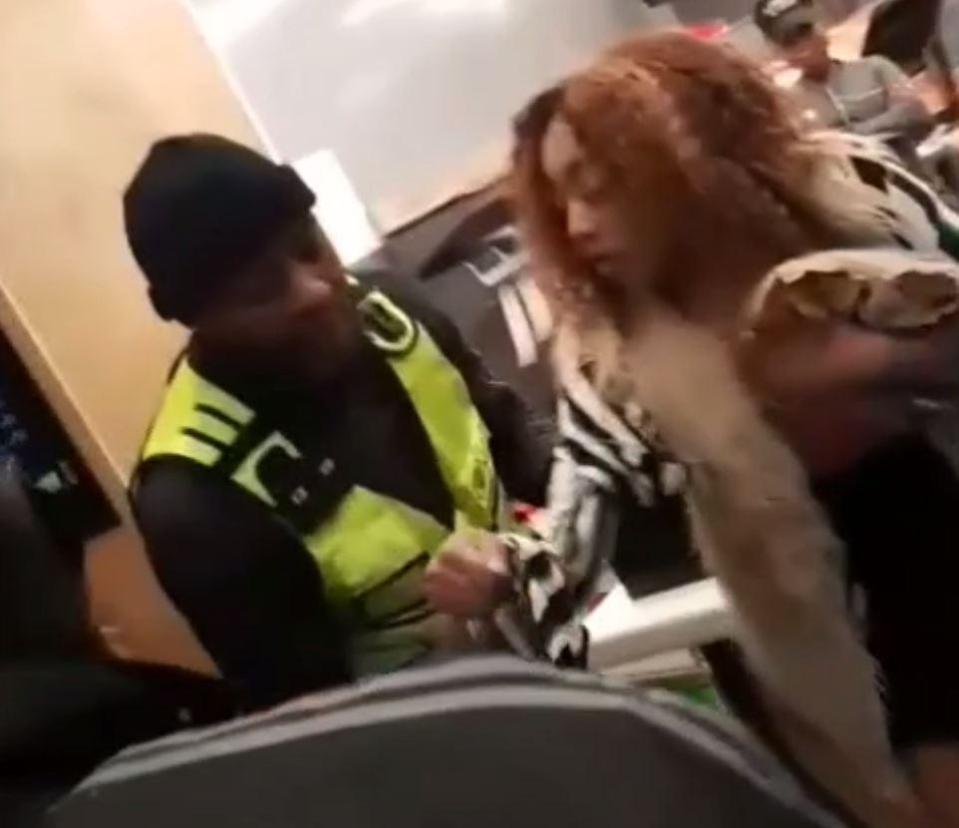 As she's removed to the other side of the counter, the girl throws cup holders across the store and the McDonald’s worker raises her hand several times before pulling her closer, grabbing her hair and slaps her in the head.

The customer is shown being removed from the restaurant and the employee is led away by her colleagues as bewildered customers look on and gasp.

Antonia says: “After the incident, the worker got taken to the back of the store and the girl was escorted outside by the security guard.

“The girl was there for a further ten minutes insulting the security guard and causing a scene. Eventually her friends walked off and left her then she followed shortly after.

“I don’t know who the girl in the video is or her friends.”

A spokesperson for McDonald's told The Sun Online: “We take matters like this extremely seriously and do not tolerate violence in any form, either from customers or our crew.

"We are investigating this incident as a matter of urgency.”