History was made on The Voice Season 21 finale Tuesday, when Team Kelly’s family folk trio Girl Named Tom — a.k.a. siblings Bekah, Caleb, and Joshua Liechty — became the first group to ever win the show.

A trio had never competed in a Voice finale before, and the last time a non-solo contestant made it even that far was way back in Season 4, when country duo the Swon Brothers placed third. But Girl Named Tom bucked the odds this season, beating out four solo powerhouses. (Team Blake’s soul belters Wendy Moten and Paris Winningham respectively came in second and third, Team Kelly’s teen-pop prodigy Hailey Mia placed fourth, and Team Legend’s underdog Jershika Maple was fifth.)

Viewers were excited about this landmark victory and were proud of the trio's coach, Kelly Clarkson, for taking home her fourth V-shaped trophy since joining the Voice panel in 2017. And while there was some grumbling about Girl Named Tom’s win on social media, that was only because Season 21 was stacked with some of the best talent the series had ever seen. 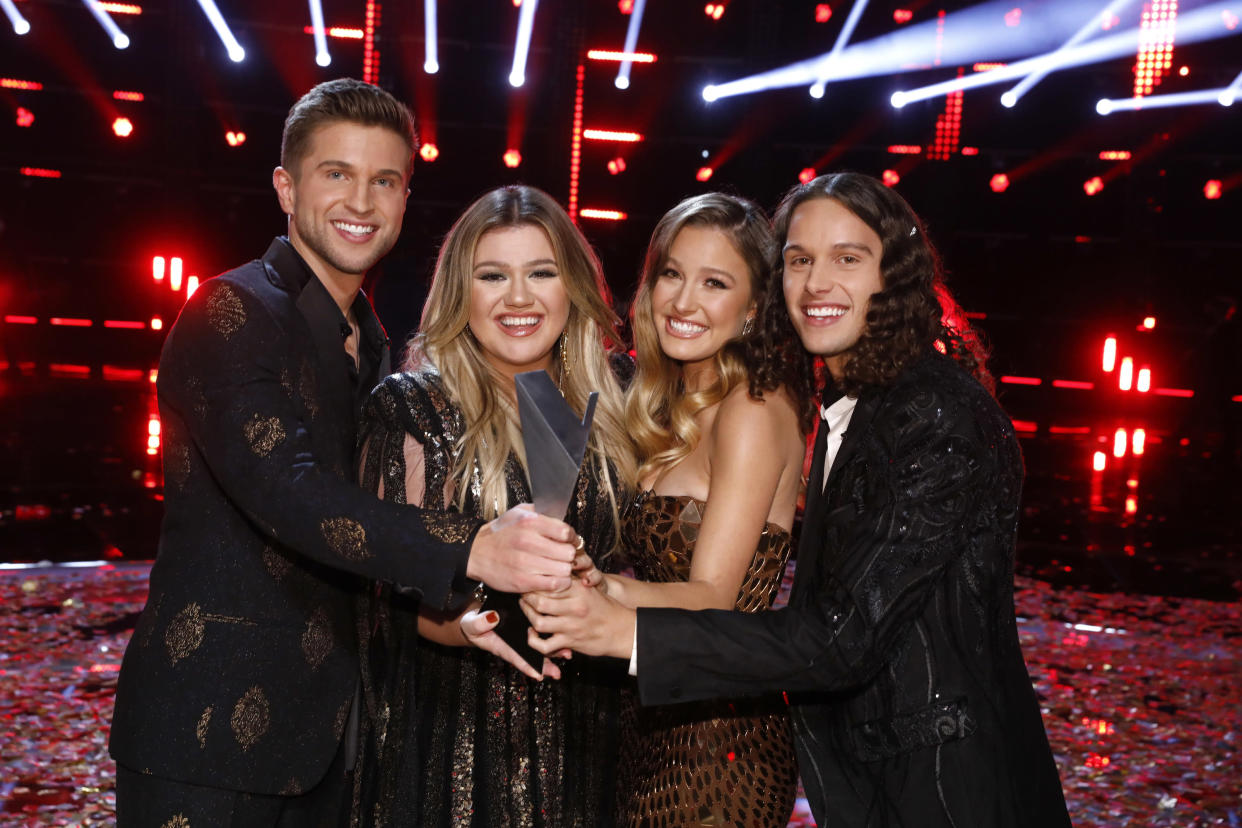 However, anyone keeping close tabs on this season’s stats should not have been too surprised by Tuesday’s result.

During their literally game-changing Voice run, Girl Named Tom became the first act in all 21 seasons of the show to have four of their songs in the Apple Music Top 10 at the same time, and they reached No. 1 twice on the main Apple Music Top 200 chart with their exquisite covers of Joni Mitchell’s “River” and Fleetwood Mac’s “The Chain.” They were also the most-viewed Voice Season 21 act on YouTube, with nearly 9 million spins.

Additionally, Hits From the Road, Girl Named Tom'a pre-Voice album from February 2021, is as of this writing sitting pretty at No. 17 on the Apple Music Top Albums chart — which makes them the show’s first-ever contestant to have songs charting in Apple’s Top 200 from a self-released album alongside their official Voice studio recordings.

All of this bodes well for Girl Named Tom’s chances when they eventually release an album on The Voice’s affiliated record label, Universal… or even if they don’t, which is frustratingly often the case with this show's champions. Bekah, Caleb, and Joshua clearly already have a fanbase as an indie act, so they are going to be just fine. Maybe they don’t even need a record deal.

The Voice won’t return to until fall 2022, as its schedule slims down to just one season per year. This is probably for the best, as the show has suffered some burnout in recent years, and even the much-hyped addition of new coach Ariana Grande didn’t shake things up much this season. But kudos to Girl Named Tom for bringing something truly unique to The Voice, more than a decade after the series’ network debut.