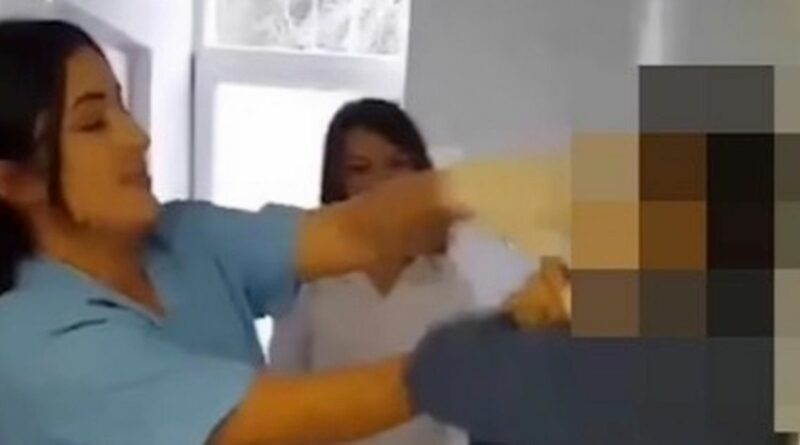 An elderly woman with dementia was brutally slapped in the face and kicked in the stomach by a nurse at a care home.

Sickening footage widely shared on social media shows a young woman retraining resident Miniere Nurja in a room while a camerawoman can be heard laughing.

The pensioner struggled to break free while worker Aurona Pelaj held onto her wrists and slapped her in the face at least four times.

READ MORE: Four men drugged own wives and shared them with each other to fulfil sick fantasies

"Just a tiny slap, as I know, a tiny kick," one woman can be heard saying in the video.

Miniere tried to resist and raised her leg trying to kick the worker but was hit with another slap.

Other members of the staff walked past behind them without interfering.

The incident happened in the Orenda elderly care centre in the city of Peja in Kosovo, police arrested two suspects on Wednesday afternoon.

A statement released by Kosovo Police said: "The suspects are being interviewed by the investigators and further actions will be taken in full coordination with the state prosecutor."

Relatives of the pensioner were informed of the incident and Miniere's son-in-law confirmed the elderly was the mother of a late member of Kosova Liberation Army.

In the letter he wrote to the media, he said the family were extremely worried by the violence inflicted on her.

It added: "Ms Miniere has been a resident of this centre of a year. With the release of the video, we are all concerned.

"We have asked for taking her at our home.

"Miniere Nurja, I must mention, is the mother of a martyr who lost his life at the age of 17, which is even more painful.

"She was often visited by her daughter and relatives, but we don't know what happened. She has been there for a year, the lady suffers from Alzheimer's."

A spokesperson for the retirement home also confirmed the two workers have been suspended from work while the police carry out the investigation.