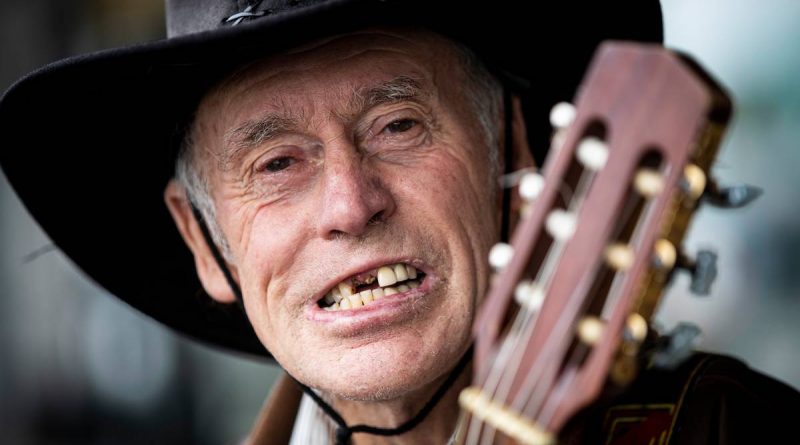 A school has apologised after an iconic street busker had two front teeth knocked out by a stone thrown by a pupil as he took a dip at an Auckland island bird sanctuary.

Jock Hume, best known as The Singing Cowboy, is nursing sore lips and shattered smile after he was struck in the mouth at Tiritiri Matangi Island last Wednesday during an incident that left him needing medical and dental treatment.

Police are now investigating and plan to follow up with the school.

In the meantime the 73-year-old has been forced to cancel gigs across the North Island under doctor’s orders and faces a steep dental bill upwards of $12,000 to have his front teeth replaced after they were sheared off by the projectile.

Today Orewa College principal Greg Pierce said the school was sorry, describing it as a “very unfortunate and disappointing incident”.

He said a letter of apology had been sent from both the school and the student involved, and he had personally contacted the Hume household to express his concern.

The college would also fully co-operate with any police investigation after learning a formal complaint had been lodged by the injured pensioner.

Hume, who was enjoying an outing on the Hauraki Gulf bird sanctuary with his elderly sister Mary, said the last thing he expected was to suffer such a bad injury after he had asked politely for the school pupils to stop throwing stones in the water while he went for a swim.

“I said I am only going to be in the water for two or three minutes and then they could carry on.”

But as he lay on his back, he could feel stones landing nearby. When he changed position one unexpectedly caught him square in the head momentarily dazing him.

“The little horrors ignored me. Next thing you know one hit me in the mouth.

“It was like a real impact. It wasn’t just a small stone, it was like small rocks those little horrors were throwing. It stunned me. My mouth was bleeding,” said Hume.

“I managed to keep my balance and said to the teacher and children there ‘you’ve just smashed two of my front teeth’.

“They looked at me in absolute disbelief.”

He said a teacher approached him with the child responsible who was made to apologise but now claims the school is downplaying the incident.

“If Mr Pierce realised how serious it was he’d come around here to have a look at my mouth and see what damage the little horrors had done,” said Hume, who is still shaken from the episode.

But the college principal denied the school had refused to take full responsibility for the incident.

“I have personally contacted the victim’s sister who is his caregiver, to express my concern over this very regrettable incident and to inquire into the recovery of the victim,” said Pierce.

“A letter from myself together with a letter of apology from the student has also been courieredto the victim’s household which states again how sorry the college is that this incident occurred.”

He said staff, the student and their parents had been addressed and information had been obtained about what happened.

“It occurred while the students and staff were in the process of moving from the shore area to the ferry terminal,” said Pierce.

“Unfortunately at the same time a member of the public entered the water while some students were skipping pebbles.

“As a result of this one of the pebbles accidentally made contact with the member of the public who had just entered the water.”

Hume said he had laid a complaint with police.

A police spokesperson said they had received a complaint in relation to an incident at Tiritiri Matangi Island.

An elderly man was reportedly hit in the face with a stone thrown by a school student while swimming at the island.

Police had spoken with the complainant and would be following the matter up with the school involved as part of their ongoing inquiries.

Despite Easter plans in disarray, Hume was putting on a brave face a week after his painful ordeal, continuing to busk at local haunts around Auckland.

“It looks a bit unsightly up close but I’ll still be okay to do my busking,” said the street performer.

“My singing cowboy has meant so much to me all these years, I love it when I’ve got a trip to look forward to, and all my plans had to be cancelled because of what those little horrors had done.”