Sir David Attenborough has warned the ‘excesses’ of Western capitalism must be curbed in order to protect nature – and that he believes people are beginning to realise that ‘greed does not bring joy’.

The highly-respected naturalist, 94, says a more equal society, where ‘those that have a great deal have a little less’, would help the natural world ‘begin to flourish again’.

He also warned that the standard of living in wealthy countries would ‘have to pause’ in order to better protect the natural world.

However the veteran broadcaster, the voice behind the critically-acclaimed Blue Planet series, said he did not believe capitalism was dead.

Speaking in the debut episode of a new BBC podcast series, hosted by environmental broadcaster Liz Bonnin, and which is being released today, he said: ‘We are going to have to live more economically than we do – and we can do that.

‘I believe we will do it more happily – not less happily. 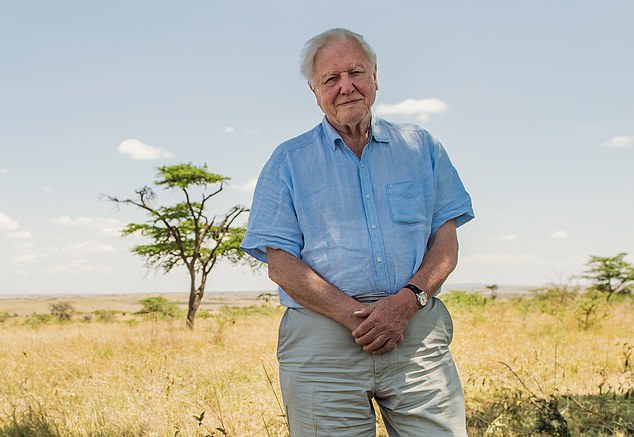 Sir David Attenborough (pictured) has warned the ‘excess’ of Western capitalism must be curbed in order to protect nature, adding that people are beginning to realise that ‘greed does not bring joy’

‘The excesses the capitalist system has brought us have got to be curbed somehow.

‘That doesn’t mean to say that capitalism is dead.

‘I’m not an economist and I don’t know – but I believe the nations of the world, the ordinary people worldwide, are beginning to realise that greed does not actually lead to joy.’

On how to curb those excesses, Sir David said if we had a more equal society, wherein ‘those that have a great deal have a little less’, ‘the natural world would begin to flourish again’. 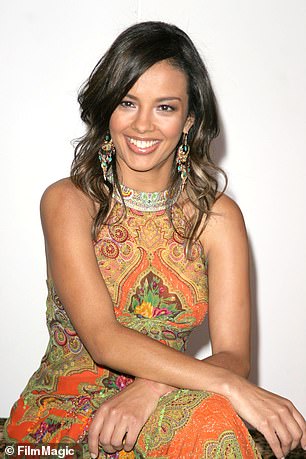 His comments are from an episode of a new BBC podcast series, hosted by environmental broadcaster Liz Bonnin (pictured)

During his talk on the new BBC Radio 5 Live podcast named What Planet Are We On? …with Liz Bonnin, Sir David added that the standard of living in wealthy countries is ‘going to have to take pause’.

He also spoke about the impact of Covid-19 during the debut episode of the podcast, which is being released today.

The broadcaster said he was frustrated by how the pandemic has delayed governments taking action.

He says: ‘It’s been a hindrance, we can’t pretend otherwise, it’s dislocated so many lives, it’s totally interrupted continuity of thoughts and arrangements and so on.

It’s a disaster for all of us. We’re losing time.’

The release of the podcast comes days after Sir David revealed his diet has become increasingly meat-free as part of his personal efforts to save the planet.

The broadcaster, who lives in Richmond, London, said that while he is not a strict vegetarian because he still eats fish, he cannot remember the last time he had a piece of red meat.

He told Good Housekeeping that his thinking had changed about the meat industry after he began thinking almost daily about the ‘dreadful things’ humanity has done to the planet.

He revealed he had never anticipated changing his diet to such a large extent, saying: ‘I do eat cheese, I have to say, and I eat fish. But by and large I’ve become much more vegetarian over the past few years than I thought I would ever be.’ 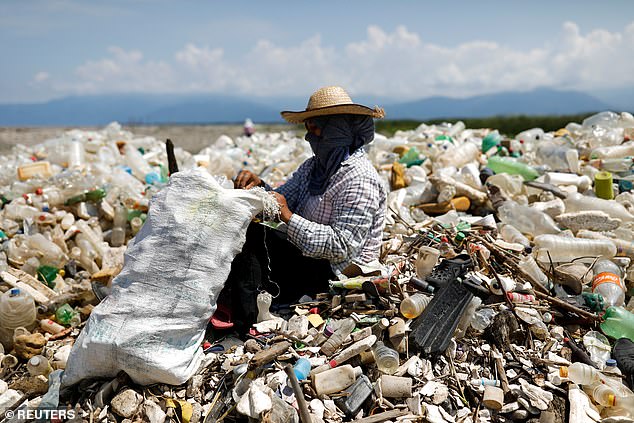 On how we begin to curb those excesses (pictured a worker collects plastic bottles from a pile of rubbish) , David Attenborough suggests if we had a more equal society, wherein ‘those that have a great deal have a little less’, ‘the natural world would begin to flourish again’

After being asked how he had changed his lifestyle in response to climate change in recent years, he explained: ‘Well, I have certainly changed my diet.

‘Not in a great sort of dramatic way. But I don’t think I’ve eaten red meat for months.’

In the book, he admits he feels it important to remind himself of the ‘dreadful things’ that humanity has done during his lifetime, because it can be easy to forget as the sun still rises each day and his newspaper arrives through his letterbox each day.

He warns that there’s an urgency to make changes now in order to help restore the earth, while also sharing how he’s seen the natural world decline throughout his career. 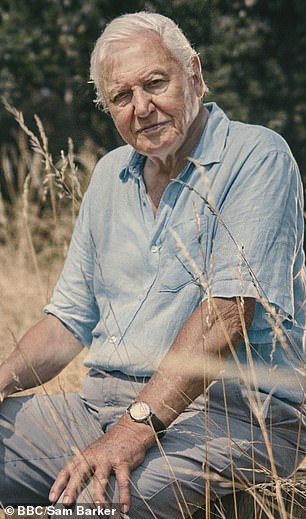 Sir David explained that people should use the things that are already at their disposal to make an impact, such as attracting wildlife by adapting gardens or re-wilding a window box.

He said it’s difficult to get a complete ecosystem to develop, but it’s important to make efforts to encourage nature to thrive without using insecticides and other chemicals that would normally be used on outdoor spaces of all sizes.

The broadcaster, who hasn’t travelled internationally for at least six months, revealed one of his biggest hopes for the planet is ‘stop the discharge of greenhouse gases’.

He insisted that ‘all the technology and science is there’ for a shift from burning fossil fuels to using renewables, but action plans need to be put into action.

Sir David recently enjoyed a private viewing of his new documentary in the grounds of Kensington Palace with the Duke and Duchess of Cambridge, after their children requested to meet him.

The 94-year-old naturalist was photographed with Prince George, seven, Princess Charlotte, five, and Prince Louis, two, along with their mother Kate, 38, after enjoying a private viewing of his newest documentary A Life On Our Planet with Prince William, 38.

Sir David told The Times that he found the Duke and Duchess of Cambridge’s children ‘charming’ after meeting them last week.

The broadcaster even gifted Prince George a fossilised giant shark’s tooth after discovering the young royal was a ‘massive fan’.

Kate and William have previously met Sir David on a number of occasions, including at the World Economic Forum in Davos, Switzerland, last year.

William interviewed Sir David at the World Economic Forum in Davos, Switzerland, last year, and during the discussion the broadcaster warned that humanity needed to act so that they did not ‘annihilate part of the natural world’. 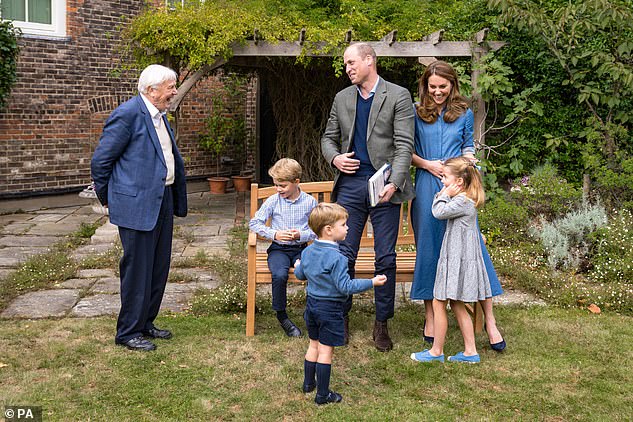 Sir David recently enjoyed a private viewing of his new documentary in the grounds of Kensington Palace with the Duke and Duchess of Cambridge, after their children requested to meet him

The Duke and Duchess of Cambridge also previously met the conservationist in September 2019 at Birkenhead, for the naming ceremony of the polar research ship the RRS Sir David Attenborough.

The encounter appears in the upcoming ITV documentary, Prince William: A Planet For Us All.

BBC Radio 5 Live’s What Planet Are We On? podcast is available now on BBC Sounds.

It will cover a different topic each week and include contributions from a range of experts, campaigners and other well-known figures.

Future episodes feature Idris Elba, who in next week’s episode talks climate change and food inequality, Lily Cole, who discusses hope and optimism for the future of the planet, and Jay Blades, who shares his thoughts on consumerism and re-evaluating the products we buy and throw away.

Throughout the series, Liz Bonnin will be joined regularly by BBC environment correspondent, Matt McGrath, and BBC science correspondent, Victoria Gill, who both offer their own expert insight.

It will released every Thursday on BBC Sounds.