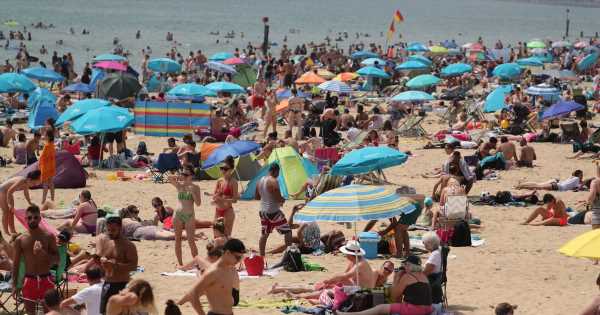 Britain is about to enter a period of stonkingly good weather with blazing 31C sunshine and temperatures that will knock your socks off – but it's not going to last for long.

Although the UK is set for several days of a scorching heatwave, thunderstorms are brooding in predictions in the near future.

The weekend ahead will be especially hot allowing Brits to do the things they do best, like guzzling pints in pub gardens and getting mates round for a barbecue feast.

Temperatures will begin to sizzle across the country from Friday with parts of the UK already starting to soak up highs of 25C.

Then as the country moves into Saturday Britain's parks and beaches will overflow with the sound of families and friends enjoying their summer with temperatures cruising up to 28C.

And just when you think mercury can rise no further Sunday is expected to be recorded as the hottest day of the year so far.

In London and the south-east forecasters predict that heat levels could rise to 30C on Sunday and it could top 31C.

The glorious spell of weather should continue through next week as the band of high pressure bringing the warmth will stick around for a little longer.

BBC Weather has predicted when it believes the heatwave will come to an end and the good news is it does not appear to be for some time.

According to forecasters, it will be around July 23 and 24 that the weather will turn and become more unsettled, with the risk of rain.

The BBC said: "We will see greater chances for low pressure systems to move in and bring some fresher and wetter conditions."

The Met Office's long-range forecast also predicts hot weather for much of July but with the same warning of unsettled weather to come.

It said: "It's likely that we'll see a good deal of widespread dry weather with plenty of sunshine, but with an increasing risk of heavy showers and thunderstorms developing from the south and west as the period goes on.

"Temperatures continue to be very warm at first, perhaps locally hot in central and southern areas, before probably becoming somewhat cooler and fresher from the southwest later next week, heralding a change to a more unsettled spell."

According to bookies Ladbrokes, this month could go down as the hottest July on record.

Jessica O'Reilly of Ladbrokes said: "The July heatwave has left the odds falling as quick as the temperature's rising, and it looks like this month's sizzling weather will see records broken all over the shop."

Get the latest stories and updates from around the world by signing up for the Daily Star News newsletter.