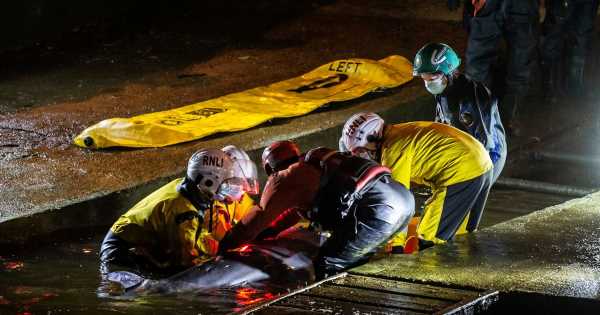 A small whale who became stranded in the River Thames in London on Sunday evening has been set free.

Hundreds gathered at Richmond Lock and Weir after the mammal, believed to be a Minke whale – between three to four metres long, became stuck, prompting a massive rescue effort.

The whale got into difficulty as it was washed ashore at the lock after swimming all the way through central London.

After the whale became loose from its moorings at 1am on Monday morning (May 10) it was seen swimming in the middle of the river but experts are still hugely concerned for its wellbeing.

It is thought that the whale remains around the Isleworth area.

The RNLI have told MyLondon that prior to going missing from its moorings the whale was displaying "concerning behaviour".

A spokesman for the RNLI said: "Chiswick’s RNLI crew were tasked by London Coastguard at 8pm on Sunday 9 May and worked with the fire rescue service, police, and British Divers Marine Life Rescue to try to free the whale.

"Together they managed to free it and were taking it to a deeper part of the river when it swam away.

"The whale was displaying concerning behaviours and experts in attendance were concerned that it may be unwell."

He went on: "The Chiswick crew in attendance returned to the station by 4am this morning and the day crew are now on call."

Videos showed it being hosed down by a man, while a vet performed a check-up at the river's edge, before the Royal National Lifeboat Institute (RNLI) arrived at the scene to cheers at around 9pm on Sunday, May 9.

Glen Nicolaides from London Fire Brigade told the BBC the whale had been moved to a more "stable" location where it would be assessed to determine the scale of its injuries and whether it could be released.

The beached whale, which some witnesses have claimed could be 19ft-long, was spotted earlier in the day swimming in the Thames under Barnes Bridge.

Jake Manketo, 20, from Richmond, said: "Everyone here is just hoping they get it out.

"We couldn't believe our eyes when we first saw the poor fella, not every day something like this happens in Richmond."

The whale appeared to have got stuck on the lock's boat rollers, as emergency staff work to set it free.

Fire crews have also been pictured at the scene, along with the British Divers Marine Life Rescue service.

It is believed the whale was first spotted at midday a few miles up the river near Barnes Bridge.

A spokesman for the Port of London Authority, which owns and operates the lock, said: "At around 7pm on Sunday, a small whale, approximately 3-4m long, believed to be a Minke whale, became stranded at Richmond Lock and Weir.

"PLA staff have attempted to assist the whale with water along with British Divers Marine Life Rescue.

"The whale is still alive and the Metropolitan Police are working to keep the public away from the water's edge."

They added that the situation is "not good", though there is no "immediate danger" to the whale.

Dozens of people have shared their pictures of the whale on social media.

One man wrote on Twitter: "Astonishing – and rather sad – sight of a whale (baby Minky???) stuck at Richmond Lock Bridge… Vet in attendance and a large crowd of people willing it back into the river!"

Another wrote: "Animal rescue now here – hopefully, they will be able to help the poor guy!"

Anyone who sees the whale is urged to report its location to the London Port Authority.