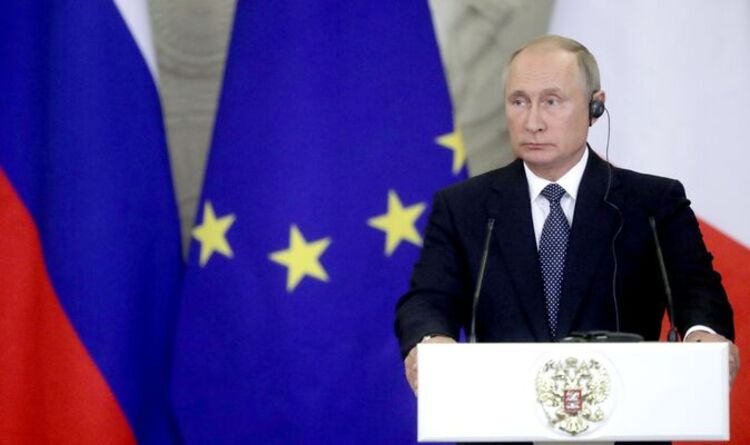 China expert Didi-Kirsten Tatlow has suggested that Russia’s Vladimir Putin is using tensions in Europe over Ukraine as a way of “distracting” President Joe Biden from combating the rise of China. Putin is massing thousands of troops and tanks near Ukraine with the US warning a Russian invasion could come at any time.

Ms Tatlow told DW News: “Clearly what Putin is doing in Europe now is distracting attention away from America’s self-avowed and necessary push as it sees it into Asia to deal with the rise of China.

“Which most people are saying is really the long-term problem or challenge,” she added.

“One does wonder to what extent is this kind of a bit of a one-two move in order to distract America to scatter strength to scatter attention to create, to create different places that are in crisis and that therefore need to be paid attention.

“And that people will perhaps look away a little bit from East Asia at this point, was everything that’s going on in Ukraine.”

President Biden on Thursday urged all remaining Americans living in Ukraine to leave the country.

“It’s not like we’re dealing with a terrorist organization.

“We’re dealing with one of the largest armies in the world.

Asked if there was a situation where he could see US troops going to rescue US citizens from Ukraine, Mr Biden said: “There’s not.

“That’s a world war when Americans and Russia start shooting at one another.

“We’re in a very different world than we’ve ever been.”

Moscow has demanded that Washington and Brussels guarantee NATO will never let Ukraine join the alliance.

NATO has so far refused Russia’s demand but sent its own proposals to the Kremlin.

Russia has amassed over 100,000 troops near its border with Ukraine but denies that it plans to invade its neighbour.