Home » World News » ‘So much mayhem’: Punters flee Grampians racecourse after cars go up in flames

As many as 18 cars have gone up in flames after a fire at the Great Western races in the Grampians on Sunday.

Thick smoked drifted over the racecourse when the fire broke out in the carpark area shortly after the first race was held.

Punters were seen racing to the carpark in a bid to save their vehicles while firefighters doused the flames.

“You could see that the car next to me was about to explode, and it was on fire, so I jumped in the passenger side and started the car and went on my way.”

As the fire approached the racetrack, Mr Norton said people started running towards their cars. 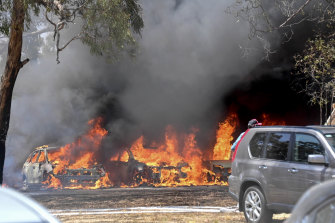 Thick smoke is seen coming from the car park shortly after the first race was held.Credit:Brendan McCarthy/Racing Victoria

Witness Thomas Parkes said hay was recently put down in the area to suppress the dust.

Racing Victoria confirmed the race meeting was called off after the first race and that patrons and horses were safely evacuated from the area within 45 minutes.

“Racing Victoria wish to advise that today’s meeting at Great Western has been abandoned after Race 1 owing to a car fire within the vicinity of the racecourse,” Racing Victoria said in a statement.

“All participants and horses have been evacuated, and patrons for their safety have either been evacuated or directed to muster points if their car was parked near the fire.”

“What we saw today was horrific,” Mr Lovell said.

Investigators will consider whether a hot catalytic converter started the initial fire.

Paramedics treated a number of people, including a man who tripped and fell during the chaos. No one was seriously injured.

Racing Victoria said up to 18 vehicles could have been destroyed in the fire.