Home » World News » Something fishy going on in Tokyo

Tokyo: It's going to be tough to replace 83 years' worth of grime.

As the fishmongers of Tokyo's famed wholesale seafood market, Tsukiji, opened for their final day at their familiar site on Saturday, they and their customers lamented the end of an era of grunge.

"Dirty is best," said Yoshitaka Moria, 38, an owner of a fish shop in the Ota ward of Tokyo, who regularly shops for seafood at Tsukiji and was buying an assortment of tuna, sea bream, oysters and amberjack on Saturday morning. "It makes this place so vibrant. I know that the fishmongers are working too hard to clean up." 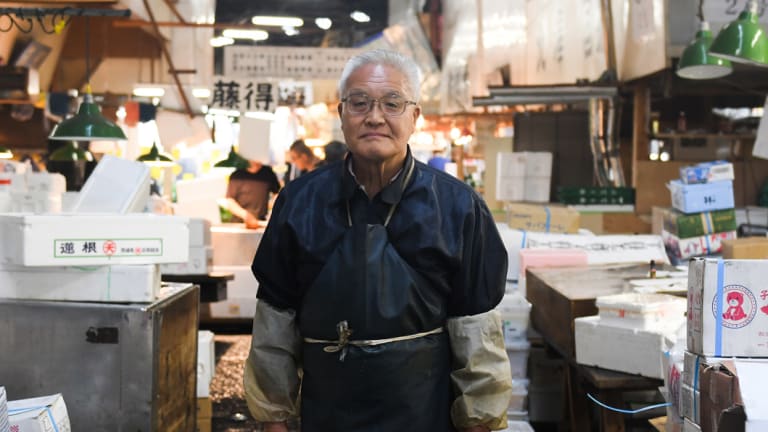 Mikio Wachi, 73, who has run a tuna wholesaler for 48 years and opposed the relocation of Tsukiji, the famed wholesale seafood market in Tokyo, pictured on the last day on Saturday. Credit:New York Times

In the waning hours of the market believed to be the world's largest for seafood, the lumpy cobblestone alleys, sprawled across 57 acres, were soaked in bloodied water, and forbidden cigarette butts mingled with fragments of bone and guts.

In the coming week, most of Tsukiji's 800-plus stalls, which sell 480 varieties of seafood and 270 types of fruits and vegetables, will be moving out from under an enormous rusted steel-frame canopy to a new location where the city has built a $7 billion fully enclosed, air-conditioned facility.

"I feel so depressed," said Teruo Watanabe, 78, who has worked as a tuna wholesaler in Tsukiji for 60 years. "I don't like change."

Aside from a ceremonial clapping chant at the end of the final tuna auction Saturday, there was little sign that it was anything other than a normal day at the market. 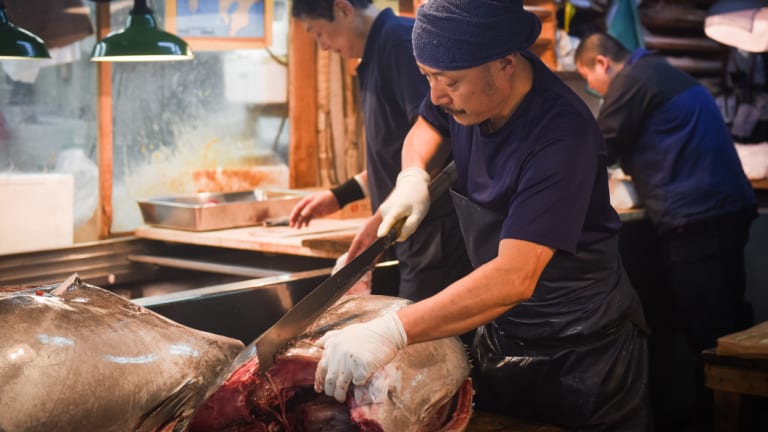 A wholesaler cuts a tuna at Tsukiji, the famed wholesale seafood market in Tokyo, on the day before its closure.Credit:New York Times

Honking at hesitant pedestrians, standing drivers wove turret trucks in and out of the aisles. Merchants tabulated invoices on abacuses or calculators that went on sale when Japan's octogenarian emperor was still in his 40s.

The Tsukiji market opened in 1935, replacing a fish market in the Nihonbashi district of Tokyo that had been destroyed in an earthquake in 1923.

Not far from the centre of Tokyo's glittery Ginza shopping district, Tsukiji has grown to be one of Tokyo's most popular tourist attractions, with visitors lining up for hours to see the daily tuna auction before 6 each morning. The wholesalers sell an average 1540 tonnes of seafood a day and an additional 985 tonnes of fruits and vegetables.

Partly because of concerns about the market's advancing age and deteriorating infrastructure, the Tokyo metropolitan government began discussions nearly two decades ago to move the wholesalers to Toyosu, about two kilometres away on an island in Tokyo Bay that used to house an old gas factory. 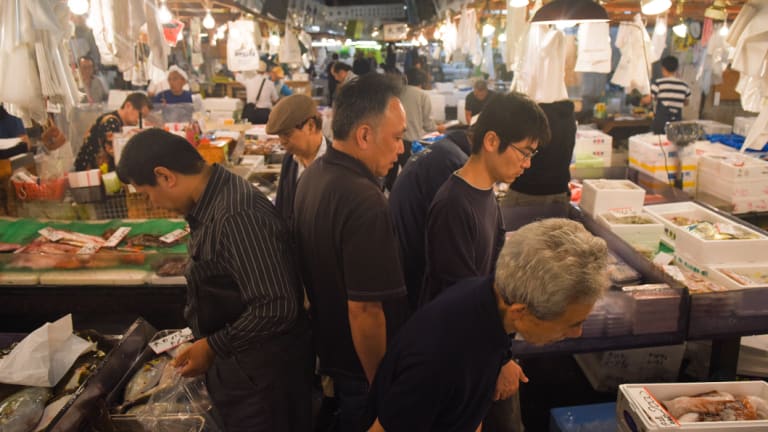 Wholesalers and customers walk through Tsukiji. On its last day, few welcomed the prospect of an air-conditioned future. Credit:New York Times

After years of construction delays, a move was scheduled for 2016. But shortly after Yuriko Koike was elected governor of Tokyo, she postponed the move after it emerged that contaminants in the groundwater at the new site far exceeded environmental limits.

The city hired experts to conduct numerous tests and installed concrete floors and extra water pumps in Toyosu. Over the summer, Koike announced that the new site was safe and scheduled the move for October.

But in the days before Tsukiji's closing on Saturday, rumours flew among the shop owners, who said the government had suppressed evidence of continuing contamination. According to one survey, 80 per cent of the business owners are reluctant to move. 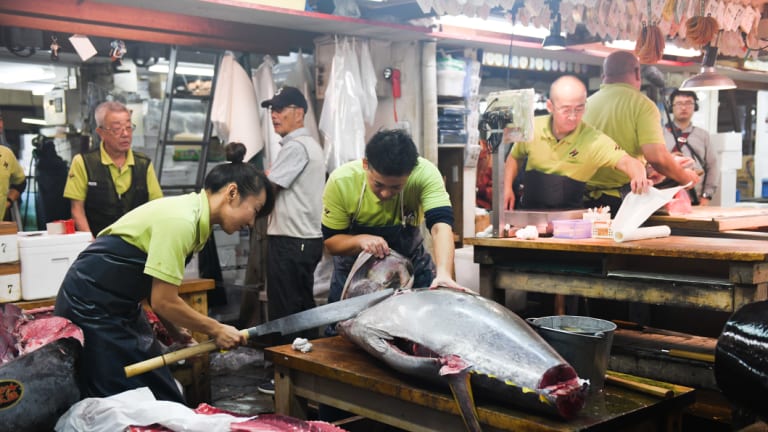 Wholesalers, customers and tourists are concerned that the new markets on the site of an old gas factory is still contaminated despite government assurances to the contrary.Credit:New York Times

Mikio Wachi, 73, who has run a tuna wholesaler for 48 years in Tsukiji, has vowed not to move to Toyosu. Instead, he said, he would transfer to another market in Ota ward in Tokyo.

Two protest posters hung on the awning above his stall. "Tsukiji market relocation: absolutely opposed!" As he scraped fine bits of tuna meat from fragile bones with a tiny wood-handled knife, he said he believed chemicals remained in the groundwater in Toyosu.

"It is as if we were to spray chemicals on the fish before selling it," he said.

Wachi's son, Akihiro, 41, said moving to Toyosu would be like opening a fish stall in Chernobyl.

"People won't buy," he said. A July survey by The Asahi Shimbun, a left-leaning daily newspaper, found that 40 per cent of Tokyo residents did not believe Toyosu was safe enough.

Many stall owners expressed fears that they might lose customers in the move, although they cited higher parking fees and more difficult access.

Outside the wholesale section of the market, merchants selling nuts, cheese, knives, beer, spices, kitchenware and souvenirs continued to hawk their inventory while packing boxes. Crowds lined up at sushi restaurants for hours, waiting to eat one final meal before the move.

Azusa Ushikubo, 45, a recruitment company employee who has been coming to Tsukiji for lunch every Saturday for the past 20 years, decided to get a jump on the closing by coming a day early, on Friday. Still, she waited three hours for lunch at Sushidai, one of the most popular restaurants in the market.

On Saturday, some Tokyoites who had never managed to visit Tsukiji before made a pilgrimage for the final day.

Yumi Kondo, 46, who works as a clerk in a passport agency, came with her daughter, Miyabi, 18. By 9:30 a.m., they had stood in line for two hours at Nakaya, a sushi restaurant they had found online, and still had at least an hour to go. "The reviews said it always has long lines," said the senior Kondo. "We figured it would be worth it."

The Tsukiji wholesale market will be razed, and the city plans to build a transit hub for buses to be used during the Tokyo Olympics in 2020. A retail section next door, with sushi restaurants and shops, will remain open for tourists.

One of the biggest worries is an estimated 10,000 rats that could be unleashed during the wrecking period and new construction.