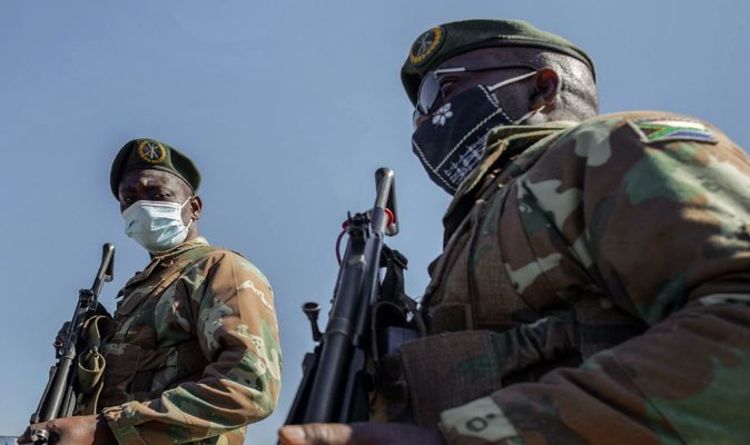 South African troops have been deployed as police struggled to contain the unrest which began last week. It came as widespread looting and unrest have left at least 72 people dead. The chaos erupted following the arrest of former President Jacob Zuma, who was convicted to 15 months in prison over contempt of court. Correspondent Vumani Mkhize told BBC Breakfast the violence was having a “massive impact” on the country.

Mr Mkhize told BBC Breakfast: “This is the biggest troop deployment in the country since Apartheid and it is just an indication of the severity of these particular incidents that have rocked Gauteng and KwaZulu-Natal.

“We have seen rampant looting, destruction of property and it has been quite violent.

“The economy of the country has been severely impacted.

“Because the port city of Durban is a major arterial route for a number of different products that transported not only to South Africa but to the rest of the region as well.

JUST IN: South Africa riots latest: ‘Things are getting scary’

“So it is quite significant and it is having a massive impact on the country at large.”

Ministers in Pretoria have warned basic food supplies could soon run out unless the looting is stopped.

Sky News Africa Correspondent John Sparks described the situation on Wednesday as “completely out of control.”

He claimed the South African police were “nowhere to be seen.”

“The Government is going to have to set up some sort of state of emergency because this is clearly out of control.

“There is no sense of self-restraint here, there is no respect for law and order, “He reported from Durban.

Mr Sparks added: “It is very, very difficult for them to police this – they are completely overwhelmed.”

Meanwhile, the brother of former President of South Africa Thabo Mbeki warned the country was a “powder keg.”

Deputy Chairman of the South African Institute of International Affairs, Moeletsi Mbeki told Sky News: “South Africa has been described – and I am one of the people who describe it – as a powder keg.

“A huge number of people living in poverty who are unemployed, any spark in South Africa could have exploded.

“This is a consequence of that.”

“It is totally out of control, everything has been destroyed,” he added.