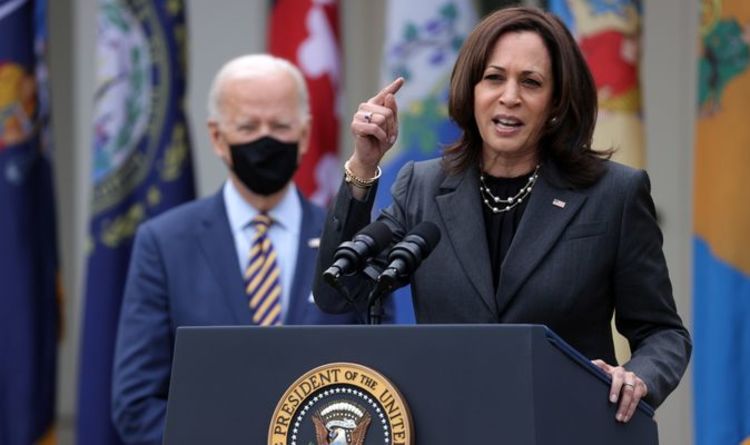 Chinese military ‘live-fire exercise’ in South China Sea in May

Ms Harris will embark on her first visit to Asia later this month since she entered the White House and will issue a stern warning to China over the growing militarisation of the disputed waterways. The 56-year-old will place a strong emphasis on defending international rules in the South China Sea, strengthening US regional leadership and expanding security cooperation, a US official said.

Ms Harris will begin her overseas trip in Singapore on August 22 before becoming the first US Vice-President to visit Vietnam on August 24.

A White House official said: “We do not want to see any country dominate that region or take advantage of the power situation to compromise the sovereignty of others.

“The Vice-President is going to underscore that there should be free passage for trade, throughout the South China Sea, and no single country should disrespect the right of others.”

The South China Sea has become a major flashpoint between Washington and Beijing over recent years.

China has continued to expand its dominance over the vital shipping lane with military bases around the Paracel and Spratly Islands.

US naval forces have closely monitored the expansion of China in the region and carry out regular freedom of navigation trips – but it has done little to discourage operations in Beijing.

The scheduled trip for Ms Harris will come a month after US Deputy Secretary of State Wendy Sherman met with senior Chinese diplomats in China.

Ms Sherman is the most senior US official to step foot in China in recent months and poured cold water on the prospect of tensions easing with Beijing.

She said: “There’s no way to know in the early stages of building this relationship whether we will get to all the places that we hoped for.”

China’s Vice Foreign Minister Xie Feng had issued a stern warning and claimed the US was “demonising” China because it was seen as an “imagined enemy”.

He added: “It is as if when China’s development is contained… America would become great again.”

US Secretary of State Antony Blinken has also taken a swipe at China this week during his first official trip to India.

Mr Blinken is looking to strengthen ties with New Delhi and warned of “rising global threats to democracy”.

He added: “When we discuss these issues, I certainly do it from a starting point of humility.”

The meeting with officials in India also comes amid recent spat between New Delhi and Beijing over the disputed Himalayan border.

On Wednesday, Chinese Foreign Ministry Spokesman Zhao Lijian lashed out at the remarks made by the US Secretary of State.

Mr Lijian said: “Democracy is a common value of humanity. It is not patented by any country.

“It is not democratic at all to undermine others while portraying oneself as superior.”
Source: Read Full Article