Seoul: In the tug-of-war between the United States and North Korea over the tentative summit in Singapore, South Korean President Moon Jae-in is the man in the precarious middle, trying to broker a high-stakes meeting between two unconventional leaders. 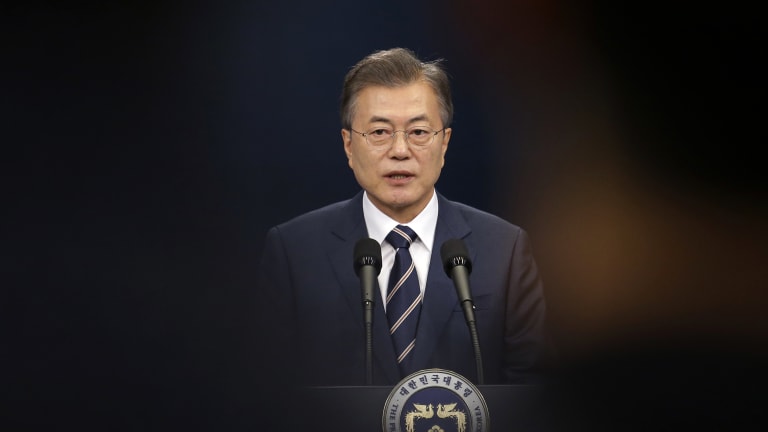 The fact that talks resumed a day after the surprise inter-Korean meeting was viewed by Moon's supporters as a sign of his increasingly effective role. Moon had pledged during his 2017 campaign to take the "driver's seat" to achieve denuclearisation of the Korean Peninsula.

His conservative critics, however, say Moon should be reinforcing the US-South Korea alliance rather than acting as a neutral facilitator between North Korea and the United States. They also say Moon is setting unrealistic expectations and masking fundamental gaps between the two sides on the definition of denuclearisation. 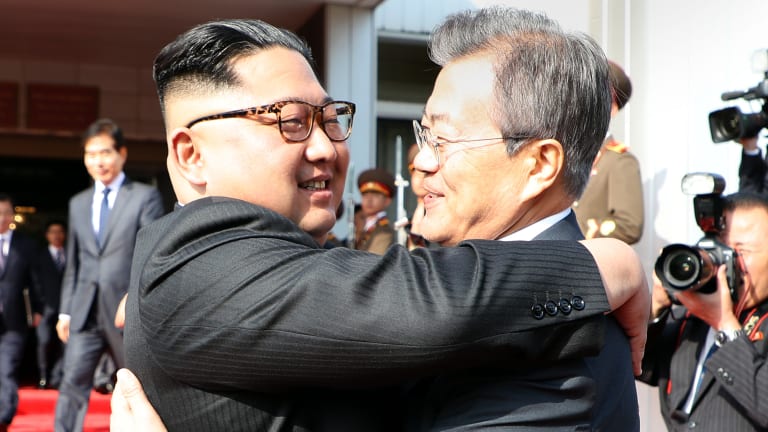 North Korean leader Kim Jong-un embraces South Korea’s President Moon Jae-in after their summit in the Demilitarised Zone on May 26.

Moon's rapprochement with the North has divided the South Korean government. On Monday, the legislature failed to ratify the Panmunjom Declaration, an agreement Kim and Moon signed at a summit in April to seek "a nuclear-free Korean Peninsula."

Moon and the governing Democratic Party have sought to guarantee that the agreement becomes law and can be enforced regardless of a change in government. But conservative lawmakers accuse the governing party of using the three-page agreement, which they note is short on details, for political gain ahead of local elections in June.

In a briefing Sunday, Moon said he hopes for an eventual trilateral summit. He described the US-North Korea summit as a key first step in achieving his goal of a formal declaration ending the Korean War.

"I hope that if the North Korea-US summit is successful, the declaration of the Korean War will be pursued through the trilateral summit."

The son of North Korean refugees who fled to the South during the war, Moon forged his political career under progressive president Roh Moo-hyun, who led the country from 2003 to 2008. Roh and his predecessor, Kim Dae-jung, advocated the so-called 'Sunshine Policy' of engaging with North Korea.

Moon, the first progressive president to take office since Roh, has vowed to continue those leaders' efforts to pursue peace on the Korean Peninsula. Allies say the mild-mannered, soft-spoken Moon is willing to play the long game without taking credit, recognising that both Trump and Kim need to walk away with a win.

Moon's spokesman declined to comment on the President's diplomatic efforts.

"Leading up to the summit, I anticipate his role will be an extension of the work he is doing now," said Wi Sung-lac, former South Korean nuclear negotiator with the North, "persuading both sides to remain at the table as they negotiate in advance of the summit, and helping them see points they can agree on."

Last week, however, Moon faced a setback. He was blindsided by Trump's decision to cancel the summit, less than a day after the South Korean leader returned from a meeting in the Oval Office.

Trump's action was discouraging and hurtful, Moon's advisers said. But recognising the US President holds the key to resuming negotiations, Moon remained committed to salvaging the summit, they said.

After Saturday's inter-Korean summit, Moon appeared poised once again to serve as mediator.

Moon announced that the North Korean leader was still committed to "complete denuclearisation" but declined to define what Kim meant, suggesting fundamental differences remain between North Korea and the United States.

Washington wants North Korea to get rid of its nuclear weapons program and allow outside experts to verify it has been abolished. North Korea insists on guarantees that Kim's regime would remain in power if it abandoned its nuclear program.

Its demands could include a reduced US military role in South Korea or an end to the American nuclear "umbrella" over South Korea and Japan. It is unclear to what degree the two sides are willing to compromise.

The issue is central in determining whether the US-North Korea meeting succeeds, and whether Moon is an effective facilitator, said Chun Yung-woo, a former South Korean national security adviser and nuclear negotiator with the North.

"The inter-Korean summit was important to give political momentum in convening the Trump-Kim summit, and energising US-North Korea expert-level meetings," Chun said.

"That (summit) will help, but I don't think that President Moon and Kim Jong-un can talk about the detailed technical issues that are vital."

The US and North Korean governments will need to negotiate the terms and conditions of denuclearisation and the scope of verification of the program's destruction, Chun said.

"President Moon wants the two leaders together in Singapore. He wants to ensure the success of the summit," Chun said. "But success depends on how far North Korea is willing to go in denuclearisation, what kind of terms and conditions North Korea will demand, and to what extent Trump is going to accommodate North Korean demands."

Kim Sung-han, dean of Korea University's Graduate School of International Studies and a former vice foreign minister under conservative president Lee Myung-bak, added that Moon should also be zeroing in on implications for South Korea.

A deal could involve a change in the South Korea-US alliance to meet North Korea's expectations of regime security, and these issues should be discussed ahead of the summit, he said.

Yoon Young-kwan, former foreign minister under Roh, said Moon's role is not to get in the weeds on technical details but to create an environment that would lead to a summit. Moon has played a critical role in delivering the positions of each side to the other while encouraging them to speak to each other, Yoon said.

"The Korean government standing in the middle is not going to close the gap directly" between North Korea and the US government, Yoon said. South Korea's "role is to more aggressively push both sides to talk to each other."

To conservative critics, however, Moon's desire to facilitate rather than advocate for one side is a sign that he is siding with North Korea. They say he is neglecting the US-South Korea alliance.

"I believe the South Korean president must stand alongside President Trump to take the lead in denuclearisation," said Hong Joon-pyo, chairman of the main conservative opposition Liberty Korea Party.

Moon "does not seem to be focused on denuclearisation, but on being an advocate of the North," Hong said. "That is our party's view, and we believe it is extremely dangerous."