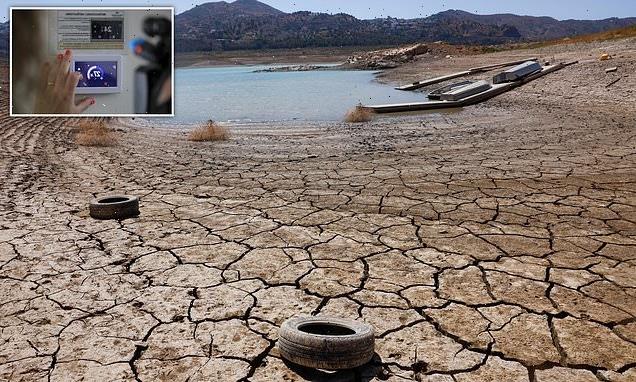 Spain has imposed harsh limits on air conditioning in public buildings  to save energy amid the country’s second heatwave of the summer.

The rules affect public transport, shops, offices, theatres and cinemas and come as part of an EU-wide effort to reduce reliance on Russian energy. 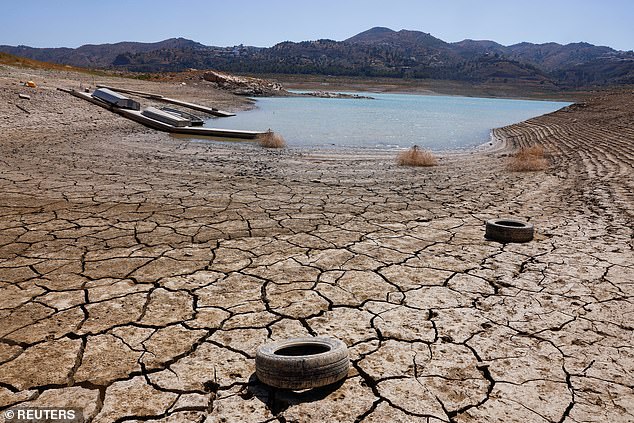 Tires lie on the cracked ground of La Vinuela reservoir during a severe drought in La Vinuela, near Malaga 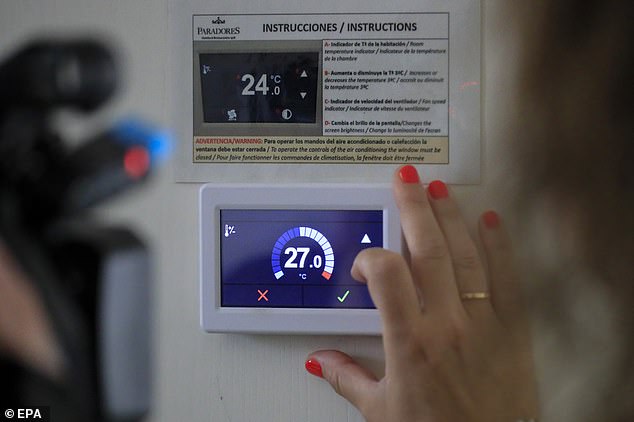 The legislation also affects heating in winter, when temperatures can be set no higher than 66F (19C).

‘The plan’s aim is to save gas for the winter in case Putin decides to cut off gas supplies to Europe as a result of sanctions… which could make this winter very difficult,’ Joan Groizard, head of the Energy Savings and Diversification Institute at Spain’s ecology ministry, told public television.

Adopted last week, the legislation also requires that from 10pm, shops switch off window-display lighting in a move also affecting the illumination of public buildings.

By the end of September, any air-conditioned or heated premises must have an automatic door-closing mechanism installed to avoid energy waste. 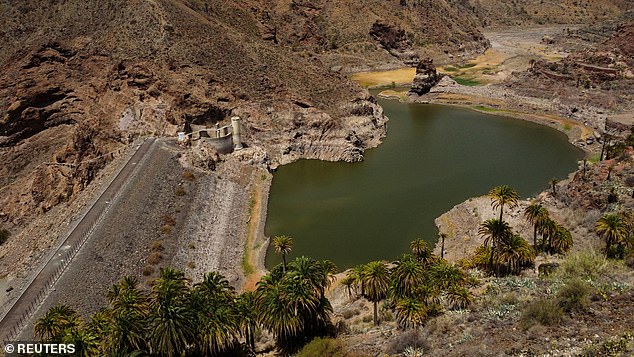 Aerial view of La Sorrueda reservoir in Santa Lucia de Tirajana at 10 per cent of its capacity, in the island of Gran Canaria 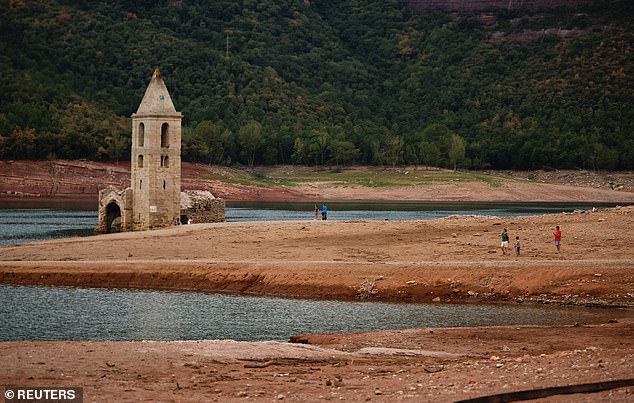 People walk around the remains of the church of Sant Roma de Sau as it emerges from the low waters of the Sau Reservoir, north of Barcelona 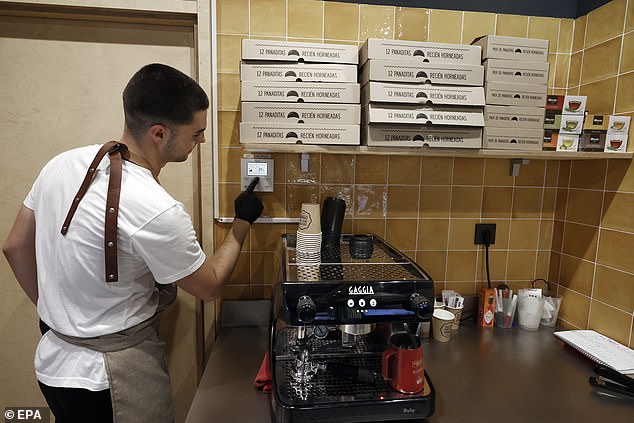 A young man adjusts the temperature to 27 degrees at a pizzeria in Pamplona, Spain

However, the law does not lay out any specific penalties and has left the task of monitoring compliance to Spain’s 17 regions, some of which have been highly critical of the move, notably those run by the right-wing opposition People’s Party.

Among the most critical has been Madrid’s regional leader Isabel Diaz Ayuso, who has vowed to take the measure to Spain’s Constitutional Court.

The government unveiled details of the plan in May as part of an EU-wide effort to cut dependence on Russia for oil and gas following its February invasion of Ukraine.

The European Commission is planning to cut EU dependency on Russian gas by two-thirds this year and end its reliance on Russian supplies of the fuel before 2030.

An EU-wide plan to cut gas consumption came into effect on Tuesday with the aim of member states cutting back by ‘at least 15 percent’ between August and March 2023 based on their average use over the past five years. 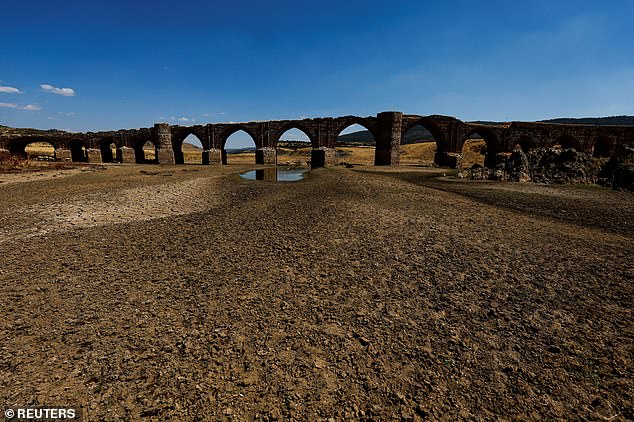 A sheep drinks water from the dried bed of the Guadiana river during a severe drought in the Cijara reservoir, in Villarta de los Montes, Spain 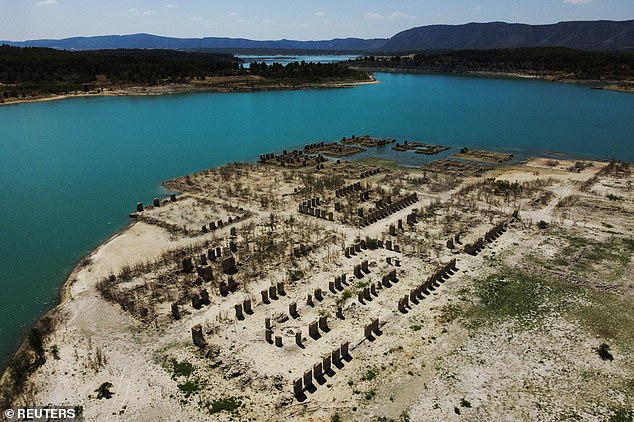 The remains of the Royal Site of La Isabela bathhouse emerge from the low waters of the Buendia reservoir, in Sacedon, Spain

Given the unique position of Spain and Portugal and their limited connection with the European energy market, Brussels has allowed both countries to adopt a reduced target of 7.0 per cent.

The overriding aim is to bolster gas reserves in time for what is likely to be a very tough winter, with European households and businesses already squeezed by skyrocketing energy prices.

A prolonged dry spell and extreme heat made July the hottest month in Spain since at least 1961.

Spanish reservoirs are at just 40 per cent of capacity on average in early August, well below the ten-year average of around 60 per cent, official data shows.

The Cijara reservoir in central Spain is now fully exposed as the reservoir is 84 per cent empty after a severe drought. 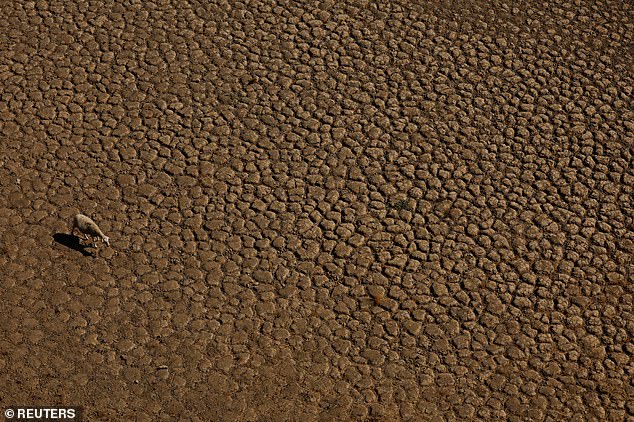 A sheep looks for something to graze during a severe drought in the Cijara reservoir, in Villarta de los Montes, Spain

In Andalusia, one of Europe’s hottest and driest regions, paddle-boats and waterslides lie abandoned on the cracked bed of Vinuela reservoir, remnants of a rental business gone with the water, now at a critical level of 13 per cent.

A nearby restaurant fears a similar fate.

‘The situation is quite dramatic in the sense that it’s been several years without rain and we’re hitting rock bottom,’ said owner Francisco Bazaga, 52. ‘If it doesn’t rain, unless they find some alternative water supply, the future is very, very dark.’

The dry, hot weather is likely to continue into the autumn, Spain’s meteorological service AEMET said in a recent report, putting further strain on Europe’s largest network of dammed reservoirs with a holding capacity of 5.6 billion cubic metres.

‘We are in a particularly dry year, a very difficult year that confirms what climate change scenarios have been highlighting,’ Energy Minister Teresa Ribera told a news conference on Monday, also highlighting that the drought was leading to devastating wildfires.