Madrid: Spanish prime minister Pedro Sanchez is making a career out of coming back from the dead.

Look at his track record. He was ejected as leader of the Socialists only to claw his way back into the job. He posted the party's worst-ever election result – twice – only to go on to win a shock no-confidence vote and come to power last year with the smallest governing group in the country's modern history.

Now, in an election he was forced to call after failing to pass his budget, the 47-year-old managed to contain a nationalist backlash against Catalan separatists to come within touching distance of a more lasting coalition. 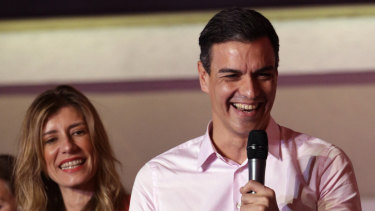 Spanish Prime Minister and Socialist Party candidate Pedro Sanchez speaks to supporters gathered at the party headquarters waiting for results of the general election in Madrid.Credit:AP

If he can pull that off, it will bring a degree of calm to an economy that was battered by the financial crisis, riven by Catalonia's dramatic push to become independent and destabilised by three elections in four years. Frustrated voters had turned away from the two traditional parties and different brands of populism had thrived in the vacuum.

With nearly all ballots counted, the Socialists won nearly 29 per cent of the votes. They captured 122 seats in the 350-seat Congress of Deputies. 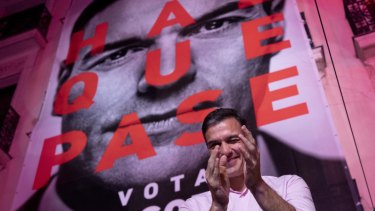 The new far-right Vox party won 10 per cent of the vote and will have 24 seats. Its success came at the expense of the once-dominant conservative Popular Party, which fell to 66 seats.

The Popular Party lost votes both to Vox and to the centre-right Citizens party, which will increase its number of seats from 32 to 57.

The big loser was the PP, which lost more than half its seats in the lower house of parliament and also lost control of the senate to the Socialists.

As he gets back to work on Monday morning, Sanchez still faces a struggle to pull together a majority and questions about what sort of legislation he'll be able to pass and how long he'll be able to govern. But the election result gives him a much broader range of options and with 123 lawmakers instead of 84, his personal authority has been bolstered.

What makes Spain an important test case is that it is a committed European Union member at a time when many in its cohort are flirting with euroskepticism and the UK is in the throes of a disruptive Brexit. Victory for Sanchez will reassure mainstream parties worried about their flagging appeal going into European Parliament elections at the end of May and offers clues into how to weather insurgents and regain the initiative. 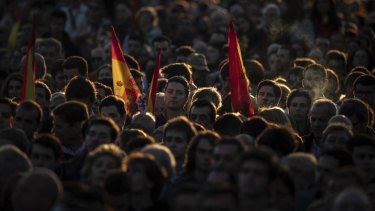 He had been in power scarcely seven months when Sanchez sensed that it was time to make a preemptive strike, according to two people familiar with his thinking. It was February, and he saw his two main rivals standing shoulder to shoulder with Spain's new nationalist firebrand, Vox, in a calculated photo op that dangled the prospect of a trinity of parties on the right ruling the country.

He saw the danger but also sensed an opportunity. His efforts to pass a budget had floundered, the momentum seemed to have gone out of his minority government and critics were writing his political obituary all over again.

But Sanchez believed the People's Party's rookie leader Pablo Casado and Albert Rivera of the centrist Ciudadanos had made a fatal error by joining Santiago Abascal of Vox at a demonstration against the government's policy of reconciliation with Catalonia.

First of all, Casado had gifted Abascal a status in the public eye he'd never before enjoyed. Beyond that, Sanchez sensed the degree of anti-Catalan sentiment being whipped up was overstated. The crowd looked impressive, filling Madrid's central Plaza Colon and the surrounding streets, but the parties had bussed in support from across Spain.

So he accepted Casado's demand for a snap election to let voters decide how the country should address the Catalan challenge. Sanchez is a formidable and photogenic campaigner who proved his worth back in 2017 when he drove himself from rally to rally to wrest back the leadership of his party.

Twelve weeks later after the Colon demonstration, Sanchez heads the biggest group in parliament. Casado lost half his lawmakers.

With 123 lawmakers in the 350-strong chamber, Sanchez may need help from as many as half a dozen groups to govern and that effort is unlikely to be completed until parties have fought the European elections.

Looking back, few people gave the Socialist leader a chance when he called a no confidence vote against Prime Minister Mariano Rajoy last May. He had just 84 lawmakers – compared to 123 now.

But he tilted the field in his favour by cutting a deal with the Basque Nationalists that forced Catalan separatist groups to fall into line with him.

Even then, most people saw a terminally weak government. Sanchez used his time in office to prepare the ground.

As a first move, he named a cabinet in which women outnumbered men for the first time in Spanish history. With one move he'd made headlines around the world and signalled to progressive voters what sort of government he could produce if they ever gave him a proper mandate.

A few days later he repeated the trick, intervening in an immigration row between France and Italy to offer harbour to a rescue ship.

His budget never looked like passing, but he ploughed on with it nevertheless through the fall and winter of last year. As a result, his plans to ramp up spending and end the years of austerity were front pages news day after day.

Casado's manifesto, when it came, didn't get even a fraction of the coverage and his doom mongering over the economy struck a hollow note as Spain continues to outperform most of the rest of Europe.

Without a budget, Sanchez still had leeway to make some spending decisions and he used them to target voters on the left that the Socialists had lost to the anti-establishment group Podemos since the economic crisis.

He hiked the minimum wage, boosted unemployment benefits for older workers and started the biggest public hiring program in a decade. The time was ripe for Sanchez to reclaim territory from Podemos, whose support base has shrunk since the last election.

Key to Sanchez's success has been his ability paint himself as "a malleable socialist," said Antonio Barroso, managing director for Europe at Teneo Intelligence in London.

It is that very adaptability that is the secret to his enduring ability to surprise.

How I Do It: The single woman in an on-and-off relationship who misses sex