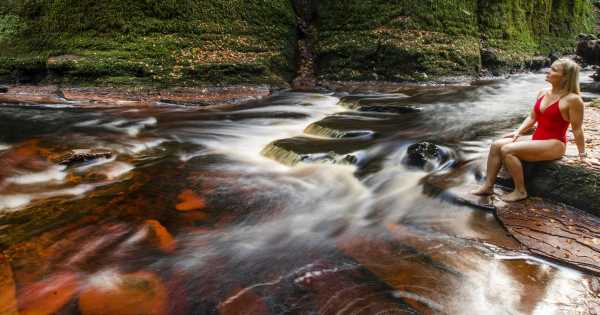 An eerie river in the UK that runs blood red is said to be so creepy that Satan himself would stand on a nearby rock to preach to his devoted followers.

The Devil’s Pulpit, in Scotland, is a well-known haunt of Halloween fans and is enshrined with mystery and tales of beasts.

Some even reckon ancient druids used the grass-covered rock poking from the side of the river to pass on messages, while others claim it was the home to evil satanic rituals.

One theory suggests the area was used by witches who cast spells and carried out rituals in the secluded spot.

But despite the highly-unusual colours that swirl among the Stirlingshire waters leading to claims of the supernatural, scientists have a rather different explanation.

They say the crimson look comes from eroded sandstone alongside the flowing water as it passes through the gorge.

This creates the chilling illusion of blood-red water as the light passes through to the red sandstone underneath.

But the Scottish river isn’t the only place set to be bustling with Halloween fans on October 31 – Yorkshire was recently named as the most haunted part of the UK with 797 ghost sightings so far.

It comes as no surprise to those who know the area as it’s littered with ancient cities, abbeys and cathedrals, misty moors and local folklores.

London came in second with reports of 701 ghosts with chilling history including the Highgate Vampire and Jack the Ripper.

Stay in the loop with all the latest news from the Daily Star by signing up to one of our free newsletters here.