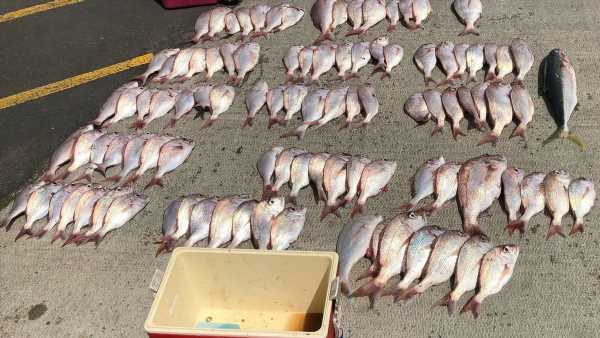 Recreational fishers are hauling in twice as much snapper from the Hauraki Gulf as the commercial industry, according to the latest data from Niwa.

But experts warn the difference is largely due to commercial fishers reducing their effort in the beleaguered inner Gulf, and shifting their hauls further afield, rather than any boost in recreational take.

The data has however shone a spotlight on the large footprint of the recreational sector, with advocates calling for greater awareness and education around fishing practices.

Niwa principal scientist fisheries Bruce Hartill initially made the comment that recreational fishers were taking twice as many snapper from the Gulf as commercial in a television news report on Sunday.

He admits to the Herald he was not quite prepared for the reaction that followed, fielding call after call, day after day, from concerned interest groups and punters about where the data – for some contentious – came from.

Exclusive data provided to the Herald shows in the last calendar year with comparable information, 2018, commercial operators hauled in 1096 tonnes of snapper, and recreational fishers 2068t.

What makes comparing this data tricky is while commercial operators are required to report their catch, due to the Quota Management System (QMS), recreational fishers are not.

Hartill said while the 2018 survey showed a two to one difference, it did not indicate an increase in fishing – rather the opposite.

During the 2012 survey, commercial reported 2269t and recreational 2490t – so a decline of more than half for commercial and about 20 per cent for recreational in six years.

This however did not mean fewer fish were being caught necessarily, with the overall SNA1 fishery – stretching from Northland to Bay of Plenty – reporting a much smaller decline in overall catch from 5075t in 2012 to 4423t in 2018.

The overall SNA1 commercial catch had remained steady around 4400t the past eight years.

Hartill said a lot of the decline in commercial catch over time in the inner Hauraki Gulf was driven by a ban on fishing methods like trawling and purse seine, and new technology like precision seafood harvesting.

Consequently fishing catch in the Northland section of SNA1 had increased, with 1044t in 2012 increasing to 1781t last year.

Another complication with the Niwa data was that it did not include the full Hauraki Gulf Marine Park, only measuring to the top of the Coromandel and not straying into the Bay of Plenty side.

Overall, Hartill said biomass data showed over the past few decades a slow recovery for snapper.

The peak year for snapper catch in the Hauraki Gulf in 1971 saw commercial operators haul in a massive 7199t, and 14,811t across the entire SNA1 fishery.

With the introduction of the QMS in 1986 there had been a big shift in fishing practices, and a slow recovery of overall snapper stocks.

“Since the late 1980s there has been a gradual but bumpy increase in the biomass of snapper in the Hauraki Gulf, and SNA1 generally.”

In Niwa trawling surveys they were now finding two to three times the number of adult snapper as they were in the 1990s.

“All the evidence suggests that population is rebuilding,” Hartill said.

However, just because catch levels were sustainable did not mean the fishery – or the wider ecosystem – was in a healthy position.

Indeed the 2020 State of the Gulf report – which took a much wider mandate – painted a dire picture of fisheries on the verge of collapse and sediment-choked and polluted waterways.

“Regarding the Hauraki Gulf while some components are improving, like kahawai and snapper, many others are not such as crayfish,” Hartill said.

The State of the Gulf report regarded crayfish as “functionally extinct”, meaning their population was so low they could no longer perform their ecological functions.

“And while the snapper population may be rebuilding, if they are not getting to a size large enough then they are not able to perform their ecological roles, such as being a predator on kina, and leading to kina barrens,” Hartill said.

“If we just focus on one species then the whole ecosystem will suffer. We need to think not just about the fish we eat, but other shellfish, seaweeds, smaller bait fish.

“We will never get the Hauraki Gulf back to a pristine state, it has been modified too much, but there is certainly room for improvements. However that is for society to decide.”

Recreational fishing lobby LegaSea spokesman Sam Woolford said the data showed that “we all need to take responsibility for the impact we have on the marine environment”.

At a recreational level, Woolford said they had been working on increasing awareness about only catching what people needed, not being wasteful, and thinking about the ecosystem impacts.

What gave him heart recently was a fisher in their 70s recounting a great day out on the water hauling in three large snapper, but only mentioning their lengths.

“Because he returned them all, saying it was because those large ones they were the big breeding ones, the ones that are eating kina, stopping kina barrens.

“We are also seeing now fishing competitions based on length, which gives anglers the option of returning their catch.

“So to see that and someone in their 70s explain with pride how their behaviour had changed is really quite remarkable.”

Woolford said however it was “dangerous” to focus on the just one species.

These fish, while not the most popular on the supermarket shelves, were the key diets for larger fish and seabirds.

LegaSea was calling for an ecosystem-based approach to fisheries management.

“These underlying issues stem from a lack of adequate fisheries management and a Quota Management System that has failed to curb/constrain these issues,” Woolford said.

“We can’t manage an ecosystem species by species – we need to consider the entire ecosystem when discussing fishing and must consider what impacts actions will have on other cohabitating species. This includes species such as seabirds and marine mammals.”

Hauraki Gulf Forum co-chair Pippa Coom said it was pleasing to hear commercial snapper catch in the Gulf had declined, but she feared it spoke to the fish stocks in the Gulf being in a very diminished state.

The data only reinforced the need for urgent action to restore the Gulf in line with the forum’s goals, she said.

These included at least 30 per cent in marine protection, restoration of 1000sq km of shellfish beds and reefs, riparian planting of the catchment, and an end to marine dumping.

“A snapper mono-culture in the Hauraki Gulf is in no one’s best interests – not even the snapper.”

The Government has been considering a report on how to address issues in the Hauraki Gulf, prepared by the Sea Change Ministerial Advisory Committee.

A spokesman for Oceans Minister David Parker said a response to the report is likely in April.