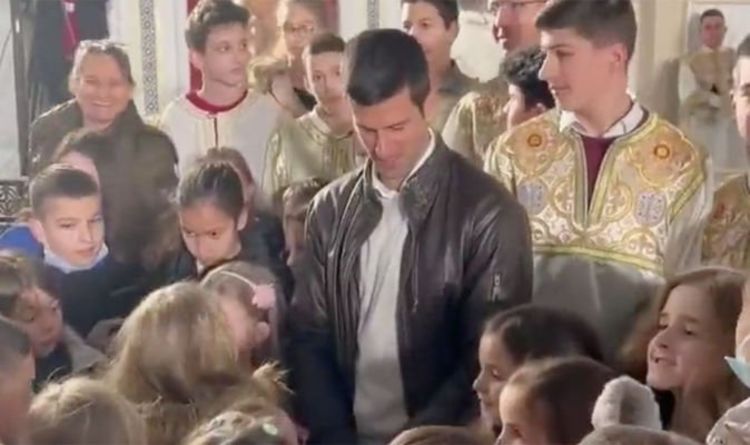 Novak Djokovic has received a hero’s welcome in Serbia since his return to his home country two weeks ago. Footage has recently emerged of the tennis star visiting a church in the Serbian capital Belgrade on Thursday. In one clip, Mr Djokovic can be seen taking communion while he shares the same spoon as the other believers.

The Serbian Orthodox Church Patriarch Porfirije delivers the communion to Djokovic – both of whom are not wearing masks.

Receiving communion by a spoon is a traditional practice of the Orthodox Church.

In another video, Mr Djokovic is surrounded by a maskless sea of people, particularly young children, as they rush to greet the tennis star.

He was seen attending the liturgy service in the Church of Saint Sava alongside his family.

The deputy bishop of the Patriarch of the Serbian Orthodox Church published a video of the visit on his Instagram account.

His visit marked the celebration day of Saint Sava, the first Serbian archbishop and a major Christian Orthodox holiday.

Mr Djokovic has been in Serbia since his deportation from Australia earlier this month.

During the ordeal, Australia cancelled Mr Djokovic’s visa and placed him in immigration detention before his eventual deportation.

Djokovic ‘cleared out of the way’ for Nadal says Webster

When he first returned to Serbia, the tennis star received a hometown hero’s welcome.

The Serb briefly had a stopover in Dubai before arriving at Belgrade’s Nikola Tesla Airport where he was whisked away through a side exit shortly after arriving.

A small group of fans waited to greet the tennis star, with some waving Serbian flags and another holding a sign that read: “Novak, God bless you”.

Last week, several hundred people again flocked to get a glimpse of Mr Djokovic when he visited a Montenegro town Budva which awarded him honorary citizenship.

It remains unclear whether Novak Djokovic will be similarly exiled from other Grand Slam tournaments over his vaccination status.

Meanwhile, the Australian Open tournament came to a head today when Rafael Nadal made history as the first male tennis player to win 21 Grand Slams.

It means the Spaniard has surpassed his long-time rivals Novak Djokovic and Roger Federer, who now trail Nadal on 20 Major titles each.