President Joe Biden in a speech Tuesday afternoon said he will enact the “first tranche” of sanctions on Russia in response to Vladimir Putin’s move on Monday to recognize two pro-Moscow separatist republics in east Ukraine and deploy Russian troops into the areas.

The move was seen by the West as a provocation and intensified worries a war was underway. Just last week, the Biden administration warned that recognizing the self-declared "People's Republics" of Donetsk and Luhansk in eastern Ukraine would defy international law and Ukraine's sovereignty and "necessitate a swift and firm response" from America and its allies.

Biden said the U.S. will impose sanctions on Russian financial institutions, sovereign debt and oligarchs in the country, along with their family members.

“This is the beginning of a Russian invasion of Ukraine, so I am going to begin to impose sanctions in response," the president said, also indicating more sanctions could be on the way if Putin proceeds further.

In the U.K., Prime Minister Boris Johnson addressing lawmakers in the House of Commons on Tuesday also imposed targeted economic sanctions on five Russian banks and three high net-worth individuals in response to the move by Putin.

Johnson said the "first tranche" of sanctions are aimed at Rossiya, IS Bank, General Bank, Promsvyazbank and the Black Sea Bank when addressing lawmakers in the House of Commons on Tuesday.

Russia “will be more isolated than ever,” AGF Investments’ chief U.S. policy strategist Greg Valliere told Yahoo Finance Live, adding countries will refuse to do deals with them.

"I think this pariah label will stick for quite a while — countries have to fear Putin," he added. "If you’re in the Baltics, I think you have to be a little worried.”

“The first is the direct impact of a potential Russian invasion and the disruption of commerce and economic activity on the back of that invasion, the second is sanctions, and the third is if we do put on sanctions what the retaliatory measures might be that Russia might impose on the U.S. and Europe.”

The conflict creates an added headwind for investors already holding their breath in anticipation of the Federal Reserve’s next move as the central bank looks to tighten monetary conditions to mitigate surging inflationary pressures. A war between Russia and Ukraine could exacerbate inflation and spur other economic disruptions.

“We believe the risk of a Russian invasion of Ukraine is overstated, as war invasions are not typically telegraphed in advance and there is usually an element of surprise, which is clearly not the case with Russia-Ukraine,” Schein said in a note. “Federal Reserve policy remains the market's biggest risk and investors are hoping that the Fed can engineer a soft landing, which would involve tightening policy just enough to calm rising inflation.”

“The market is in 'wait and see mode,' as investors brace for the Federal Reserve's next move,” he added.

President Joe Biden in a speech Tuesday afternoon said he will enact the “first tranche” of sanctions on Russia in response to Vladimir Putin’s move to recognize two pro-Moscow separatist republics in east Ukraine.

Biden announced the U.S. will impose sanctions on Russian financial institutions, sovereign debt and oligarchs in the country, along with their family members.

“This is the beginning of a Russian invasion of Ukraine, so I am going to begin to impose sanctions in response," the president said, also indicating more sanctions could be on the way if Putin proceeds further. 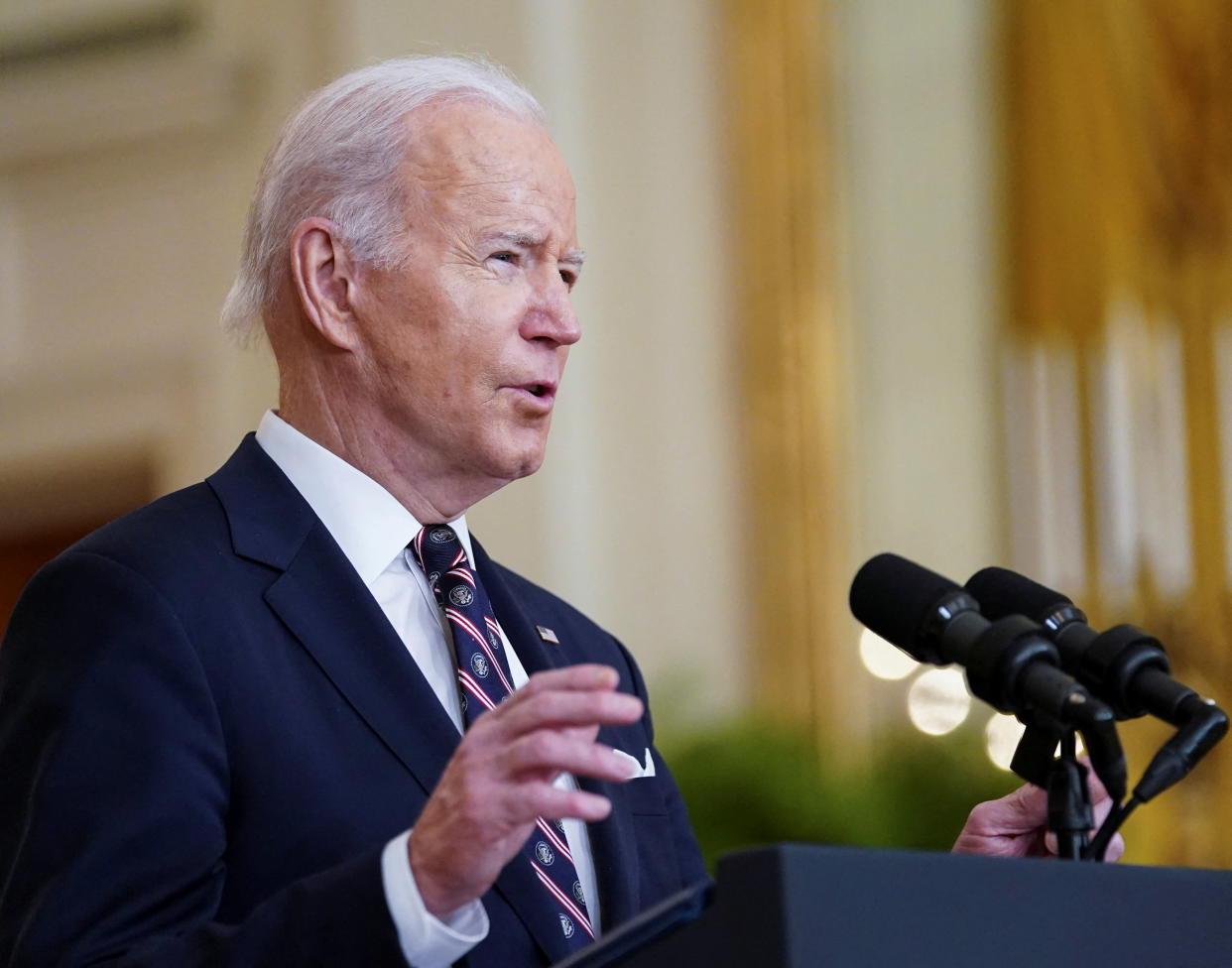 Here were the main moves in markets heading into the close:

U.S. consumer confidence declined for the second consecutive month in February, with fewer consumers reporting plans to buy homes, automobiles or go on vacation in the next six months as worries grow over the short-term economic outlook.

The Conference Board reported its consumer confidence index dropped to a reading of 110.5 this month from a downwardly revised 111.1 in January. Economists surveyed by Bloomberg anticipated a print of 110.0 expected.

"Expectations about short-term growth prospects weakened further, pointing to a likely moderation in growth over the first half of 2022," Lynn Franco, senior director of economic indicators at The Conference Board, said.. "Meanwhile, the proportion of consumers planning to purchase homes, automobiles, major appliances, and vacations over the next six months all fell."

10:21 a.m. ET: US business activity picks up in February after winter COVID drag

U.S. business activity accelerated during the month of February following a slowdown caused by the winter surge in coronavirus cases.

IHS Markit reported its flash U.S. Composite PMI Output Index, which tracks the manufacturing and services industries, bounced back to a print of 56.0 this month after falling to 51.1 in January.

The data firm said the rise was led by "employees returning from sick leave, increased traveling and greater availability of raw materials."

A reading above 50 reflects growth in the private sector.

Here were the main moves in markets during Tuesday's open:

Home price growth in the U.S. stalled in the last month of 2021, but the full year logged in record gains.

Standard & Poor’s said Tuesday that its S&P CoreLogic Case-Shiller national home price index saw an 18.8% annual gain in December, unchanged from November. The 20-City Composite posted an 18.6% annual gain, up from 18.3% a month earlier. The 20-City results were higher than analysts’ expectations of an 18% annual gain, according to Bloomberg consensus estimates.

“For the year, the National Composite Index recorded a gain of 18.8%. This is the highest calendar year increase in 34 years of data, and substantially ahead of 2020’s 10.4% gain,” said Craig J. Lazzara, managing director and global head of index investment strategy at S&P DJI, in a statement. “The 10- and 20-City Composites rose 17.0% and 18.6%, respectively — a record for the 20-City Composite, and the second-best year ever for the 10-City Composite.”

Prime Minister Boris Johnson said the "first tranche" of sanctions are aimed at Rossiya, IS Bank, General Bank, Promsvyazbank and the Black Sea Bank when addressing lawmakers in the House of Commons on Tuesday.

The three “very high net worth” individuals also targeted were Russian billionaires Gennady Timchenko, Boris Rotenberg and Igor Rotenberg, who will be banned from traveling to the country and see U.K. assets frozen as part of the measure.

"This is the first tranche, the first barrage, of what we are prepared to do," Johnson said. "We will hold further sanctions at readiness, to be deployed alongside the United States and the European Union if the situation escalates still further." 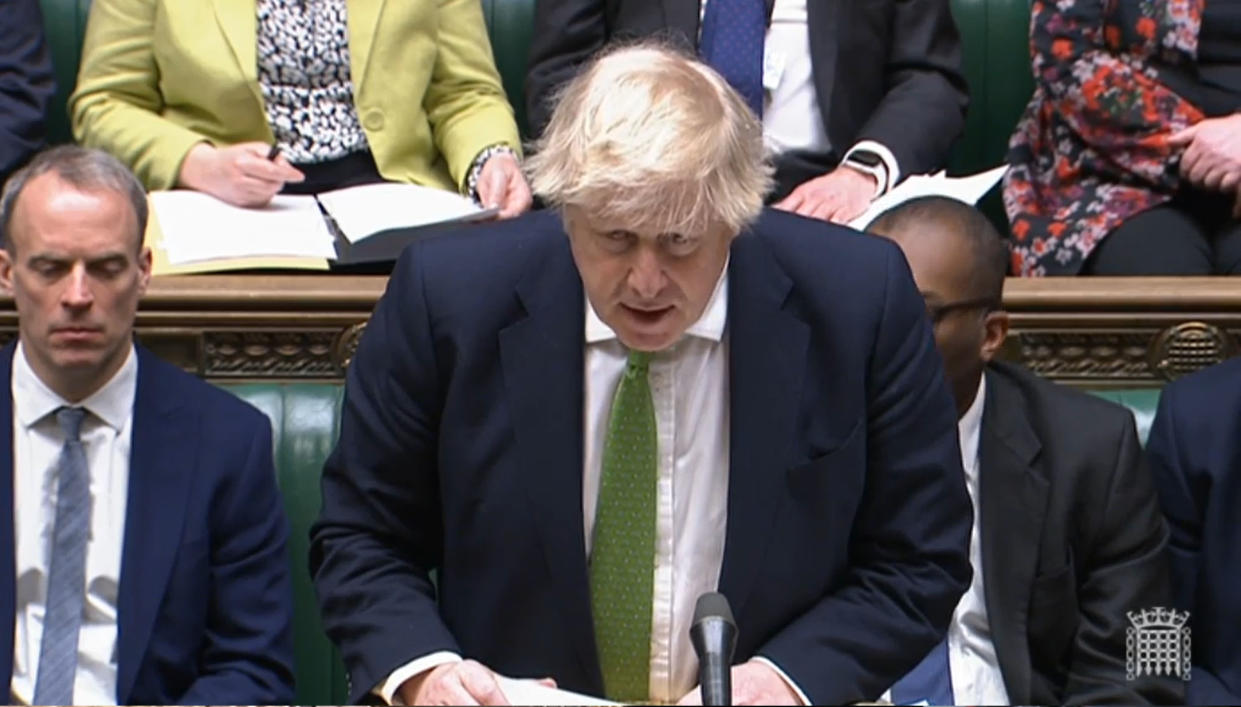 Macy's Inc. (M) reported fourth-quarter results that surpassed analyst forecasts on earnings and sales, appearing unscathed from supply-chain snafus thanks to its strategy to stock up in advance.

The company also decided against a push by activist investor Jana Partners to separate its digital business following a strategic review by consulting firm AlixPartners.

"We are more confident in our path forward as one integrated company," Chief Executive Jeff Gennette said. 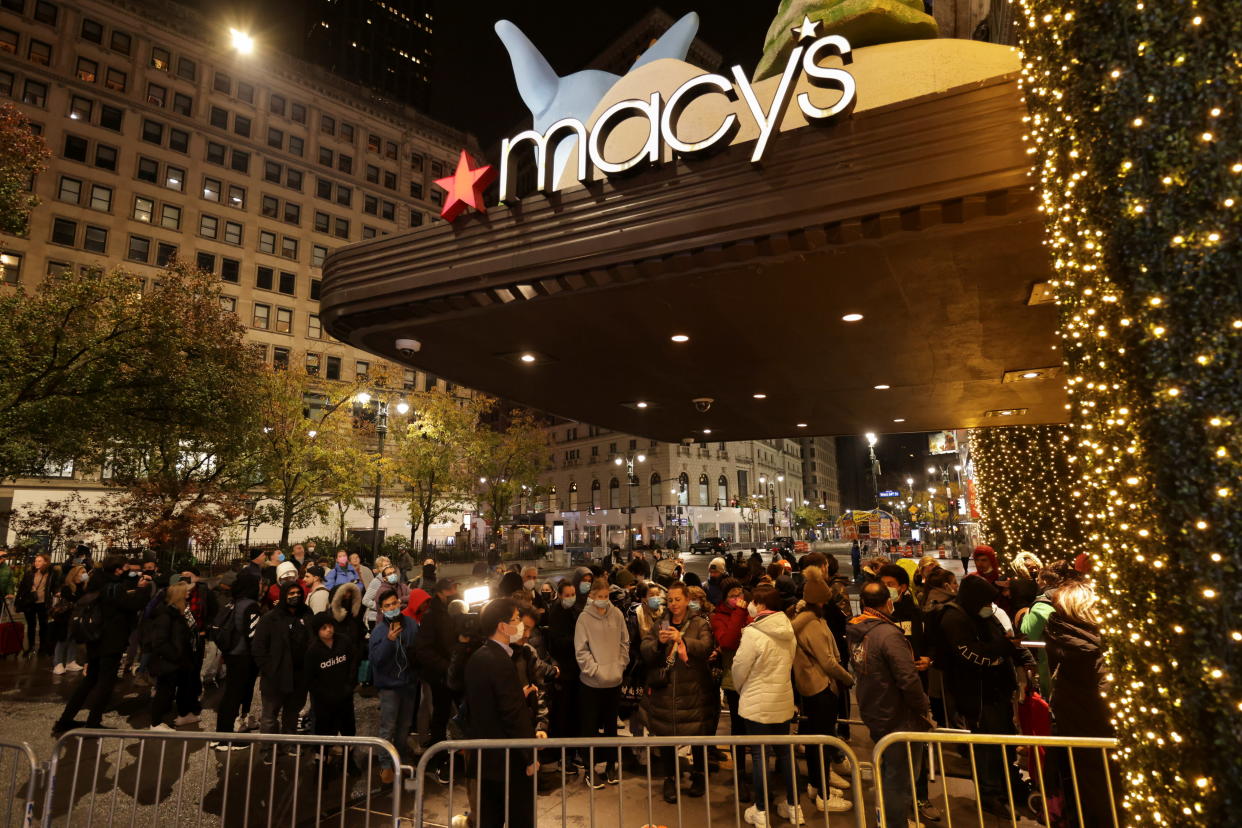 The home-improvement retailer saw shares rise as much as 1.2% in pre-market trading. Shares traded slightly lower at $344.23 a piece as of 7:53 a.m.

The company's overall net sales rose 10.7% to $35.72 billion in the fourth quarter. Same-store sales at Home Depot rose 8.1% in the same period.

Sales at Home Depot surged more than $40 billion in the last two years since the onset of the COVID-19 pandemic amid an increase in do-it-yourself home projects.

Despite supply chain constraints and fears an easing of pandemic restrictions and return to in-person activities could result in less spending on home improvement, Home Depot notched more than $150 billion in annual sales for the first time ever in the fiscal year ended January 2022. 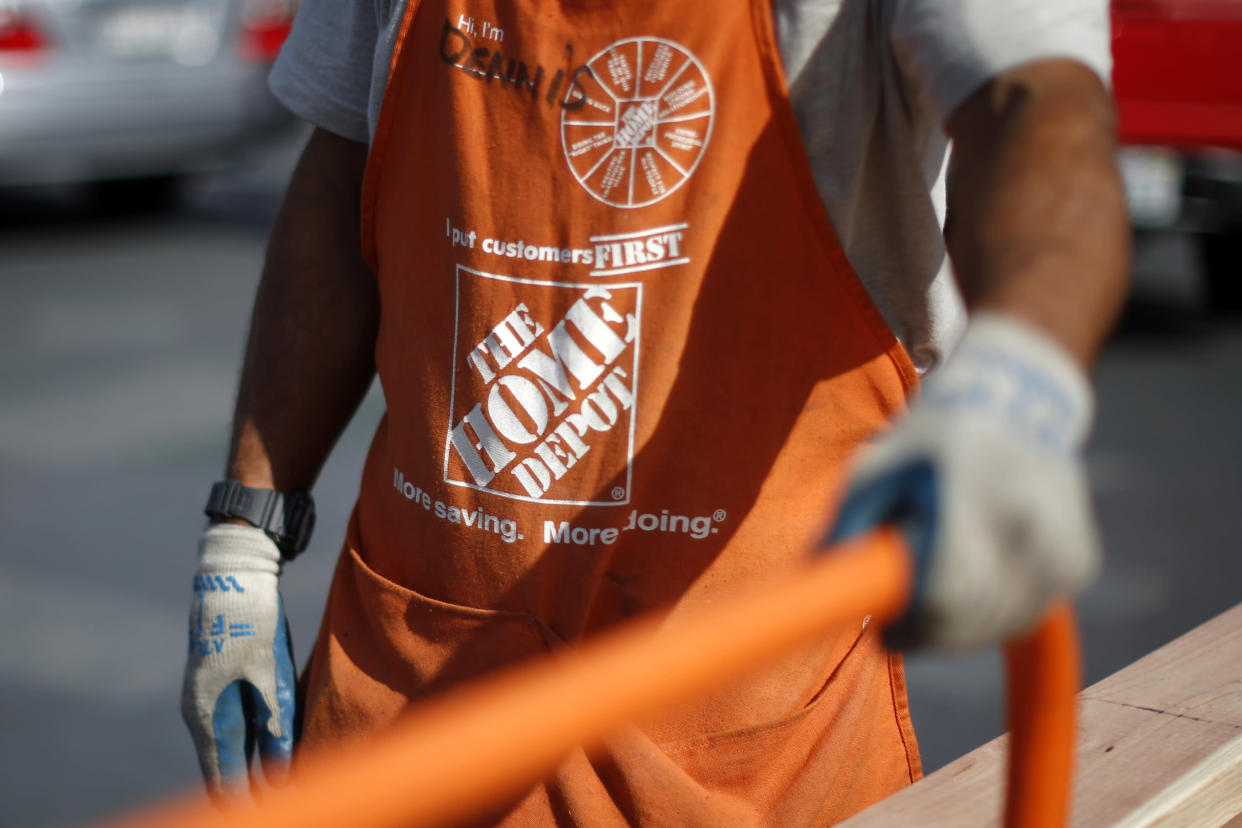 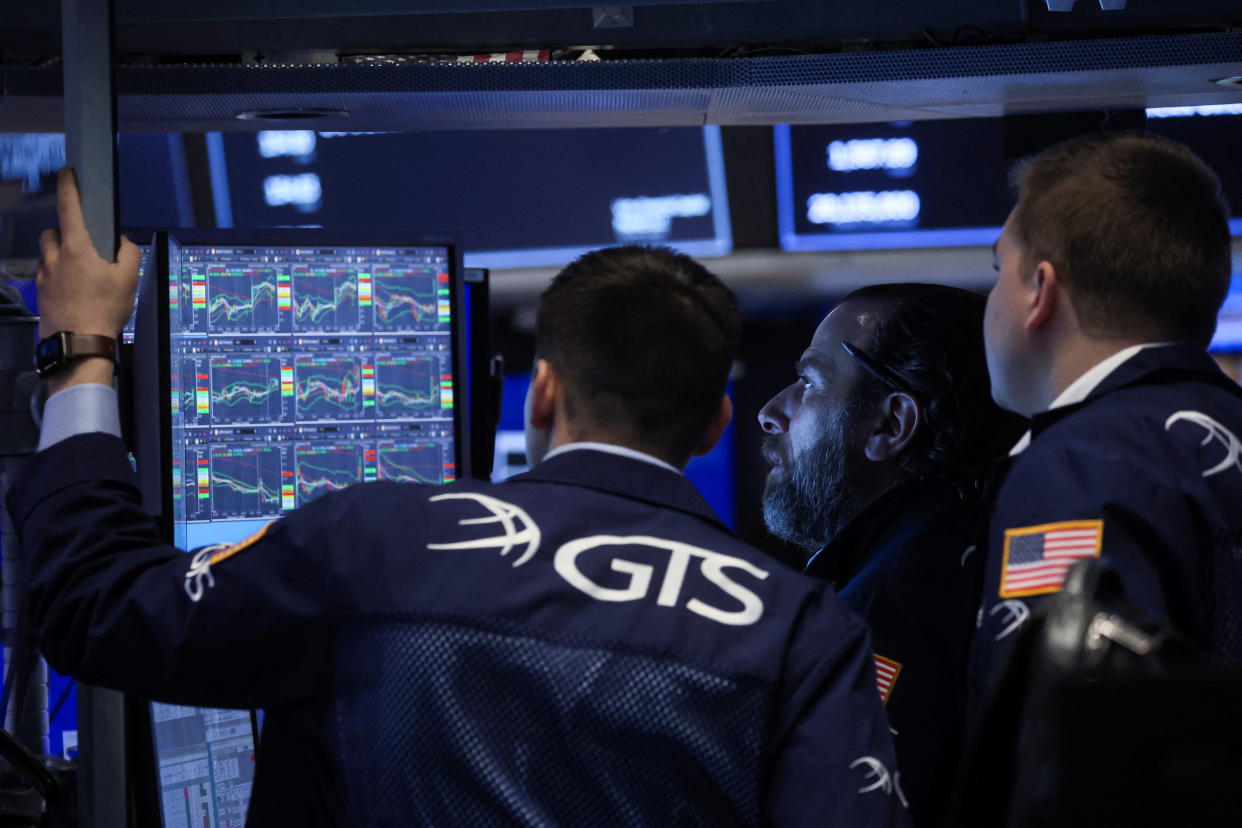