Storm Kyle is headed straight for the UK where it is expected to pack winds of 55mph to the country. Over the weekend thunderstorms, torrential downpours, cloudy skies and lightning pummeled parts of Britain bringing an abrupt end to the searing hot temperatures. But now stormy conditions are predicted to batter the country once again – but when and where will Storm Kyle strike?

An unseasonable strong extratropical cyclone is forecast to blast into the UK and Ireland in the coming week.

The storm formed off the East Coast of the United States over the weekend and now its remnants are headed right for Britain and Ireland.

Kyle is forecast to merge with a developing deep upper low coming from Greenland which will likely lead to an explosive development of the extratropical cyclone.

The storm will get ingested into a large, strengthening upper low coming from Greenland into the North Atlantic which will cause a rapid intensification of both disturbances and form an extratropical storm. 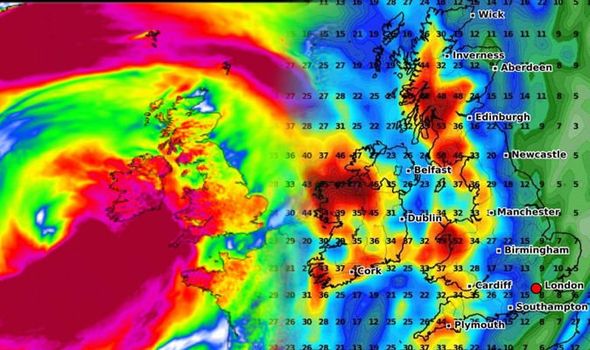 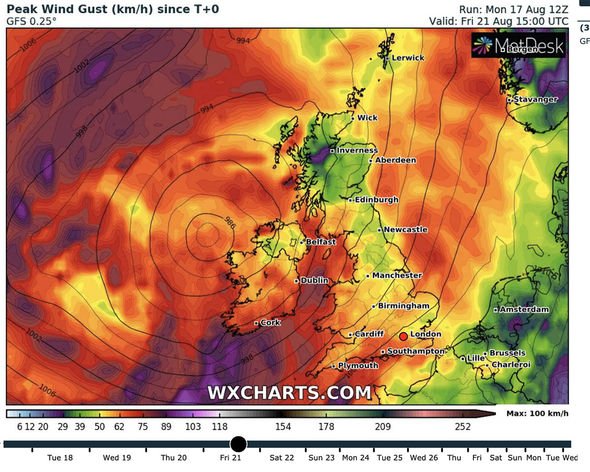 The remnants of the storm are likely to hit Ireland on Wednesday, August 19.

As the storm hits parts of the country are likely to experience heavy downpours and severe winds.

The main focus of the storm, however, will be on the developing large North Atlantic depression behind Kyle.

This depression will generate a broad wind field which is headed for western Europe. 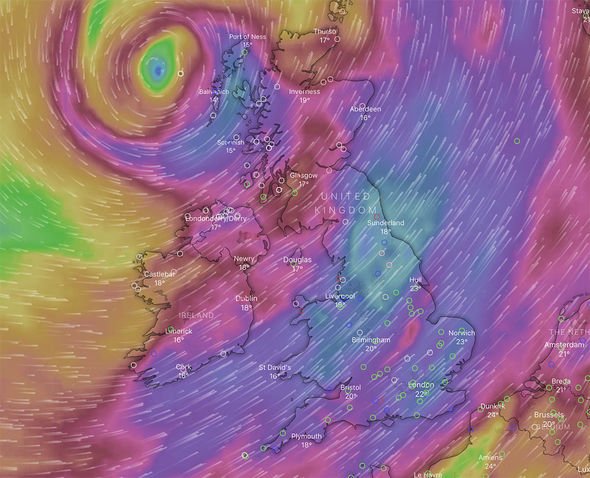 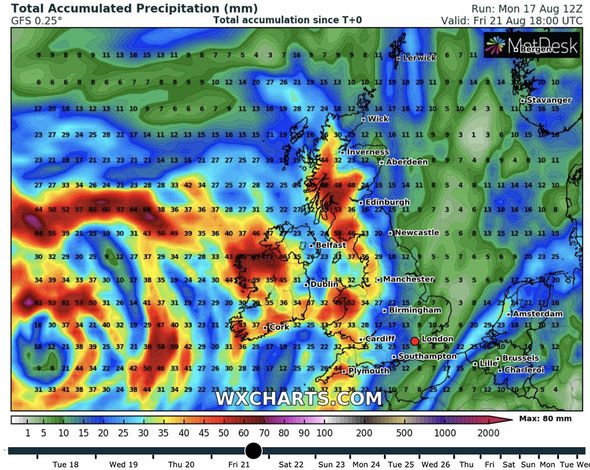 As Kyle hits many northern and eastern will likely remain dry, but there will be outbreaks of rain and strong winds already in the west and south-west pushing northeastwards through the day.

Scotland and northeast England could stay dry until day ends.

The pressure should push below 990mbar and predominantly impact the west of Ireland.

The remnants of Kyle will likely already be ingested into the whole large circulation.

On Thursday forecasters suggest there will likely be a great extend of dry weather in the east, but in the west heavy showers or longer spells of rain are likely.

The system becomes a quite big extratropical storm, gradually moving east-northeast to the immediate west of Ireland.

Kyle will already generate a large wind field to its south and southeast, turning towards western Europe with the centre likely to deepen into around 980 mbar.

On Friday and over the weekend there will be more showers or longer spells of rain.

Winds will be strong and gusty with a risk of gale force gusts in across western Scotland.

The system will near continental Europe on Friday bringing its broad wind field across Ireland, Wales and the rest of the UK.

The central pressure could be between 975 and 980mbar and will likely cause high sea waves and swell to develop.

Coastal areas of southern Ireland, southwestern England and Wales should be alert for worsening conditions.

Forecaster Severe Weather EU warned some areas across the UK could see rainfall accumulations of up to six inches (150mm) from Thursday to Saturday, which means there is a risk of flooding in some regions. 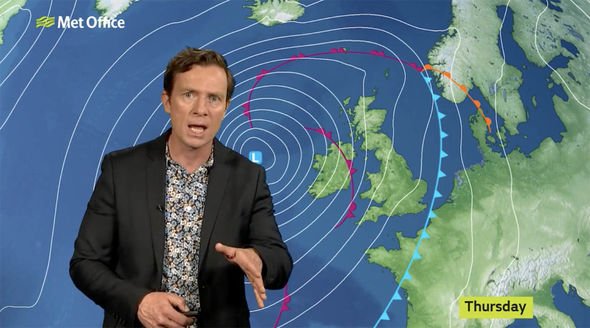 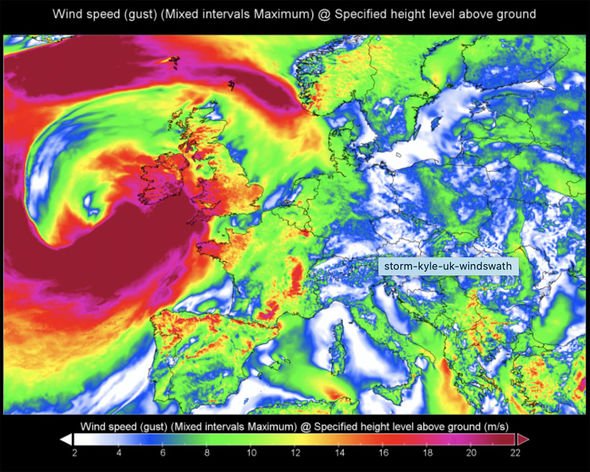 Met Office meteorologist Alex Deakin said: “On Wednesday many places will be dry for a time but then you will notice more wet weather coming into the southwest.

“There will be some heavy bursts in the south-west and the wind will pick up and the area of rain will then creep its way heading northwards on Wednesday.

“For many, it starts dry on Wednesday and there will be sunny spells in Scotland, Northern Ireland and northern England too.

“But the rain will spread into southern England and south Wales and will remain persistent across the far southwest and the winds will increase also.

“There will be a few scattered showers across Scotland on Wednesday, not the intense beasts we are likely to see during Tuesday.

“It will in fact feel quite pleasant across northern Britain, temperatures into the 20s, again it will be misty and murky around the coast and northeast.

“You will feel that warmness in the southwest where it will be wet and increasingly as the weather coming from the incoming weather system merges with other areas of low pressure to dominate our weather through the second half of this week.

“Once the area of low pressure has arrived, it will stick around through Thursday, Friday and probably beyond.

“The big difference come the end of the week is the number of isobars which tells us it is going to turn windy.

“The winds have been light recently which has allowed for those slow-moving thunderstorms and downpours.

“Further spells of rain to come this week and we will notice that stronger wind which will eventually at least turn things a bit fresher.”