Home » World News » The story of Syria: BBC doc uncovers how peaceful protests spiralled into the longest and most catastrophic conflict since World War 2

The ongoing Syrian Civil War is one of the defining crises of our times, with the once-proud Middle Eastern nation torn apart by fighting. 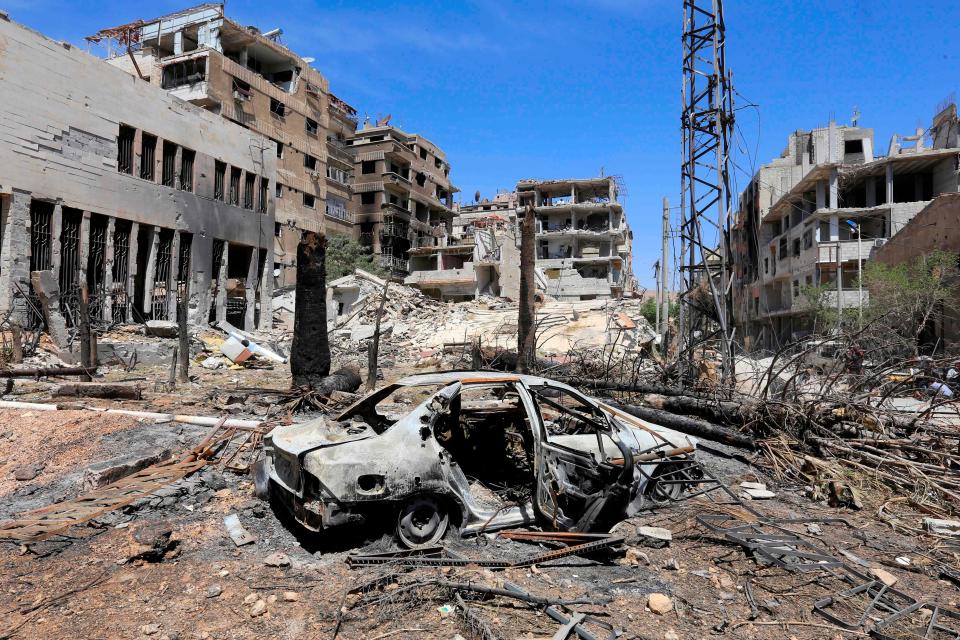 With a vast array of competing factions involved in the war it can be difficult to wrap your head around what's really going on on the ground.

But now the war is the subject of a new two-part BBC2 documentary, Syria: the World's War, which aims to trace the conflict back to its roots and chart how it has evolved.

The roots of the crisis

Canadian journalist Lyse Doucet, explains on the doc that the current war begun in 2011, following the "Arab Spring",  a wave of protests in the Middle-East and North Africa where ordinary civilians rose up against authoritarian governments.

The unrest in Syria started in March that year, growing out of discontent with President Bashar al-Assad, who rose to power with a rigged election in 2000 and has cracked down on the freedoms of Syrians ever since. 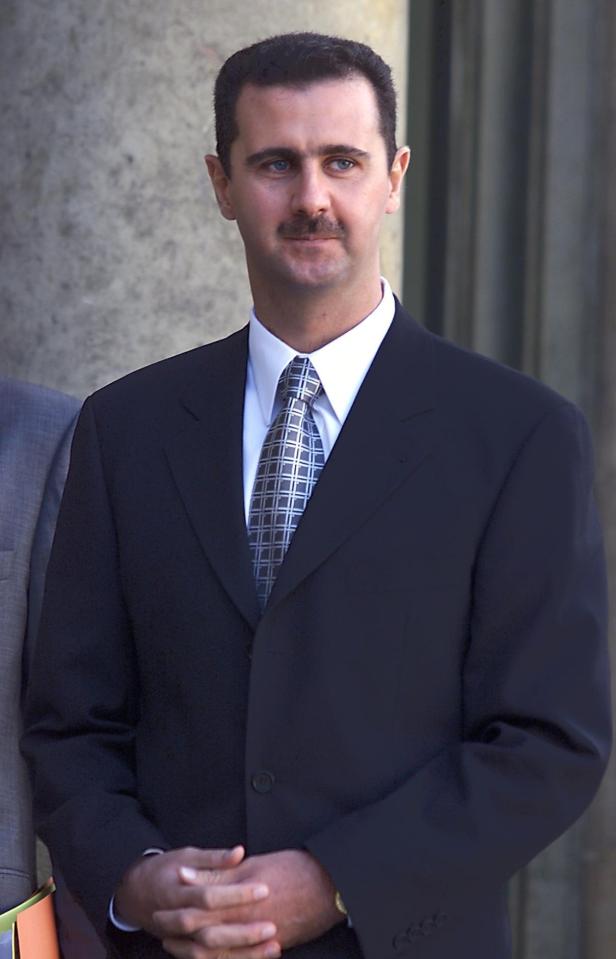 Speaking to those caught up on every side of the massive conflict, Doucet aims to uncover how peaceful protests for change spiralled into unspeakable savagery.

Noura, a 23-year-old uni student, recounts her experience of the Arab Spring.

As an anti-Assad campaigner, she joined thousands of people in the city of Homs to call for better living conditions and political freedom.

Syrians had never protested on this scale before – and unrest soon spread to other cities, like Damascus. 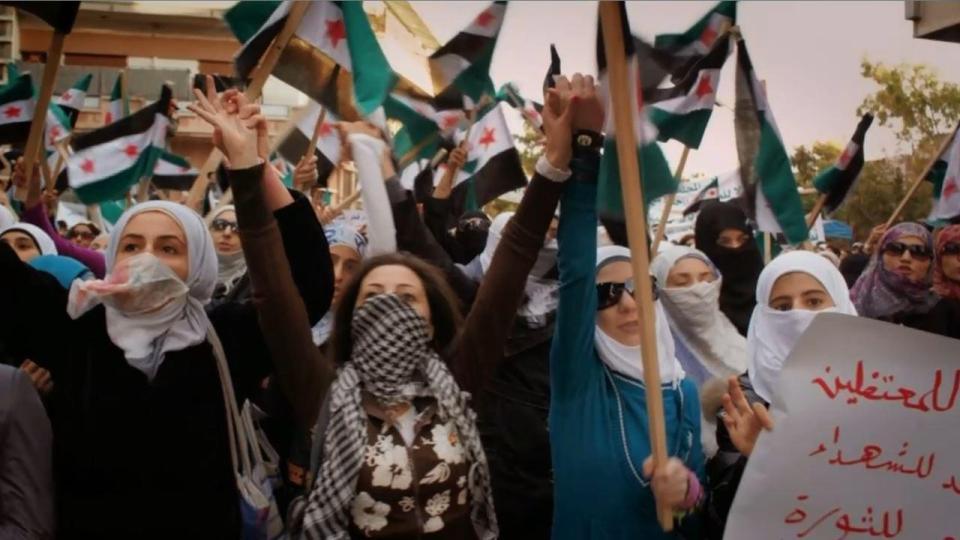 The government's retaliation to the protests was brutal – with rumours of torture and mass fighting on the streets.

When protesters in Homs swarmed around the city's clock tower on 19 April 2011, security forces were waiting.

They moved in, shooting at the unarmed protesters – causing what was called "the Clock Tower Massacre".

At least 17 protesters were killed, and this became a defining moment in the clashes. 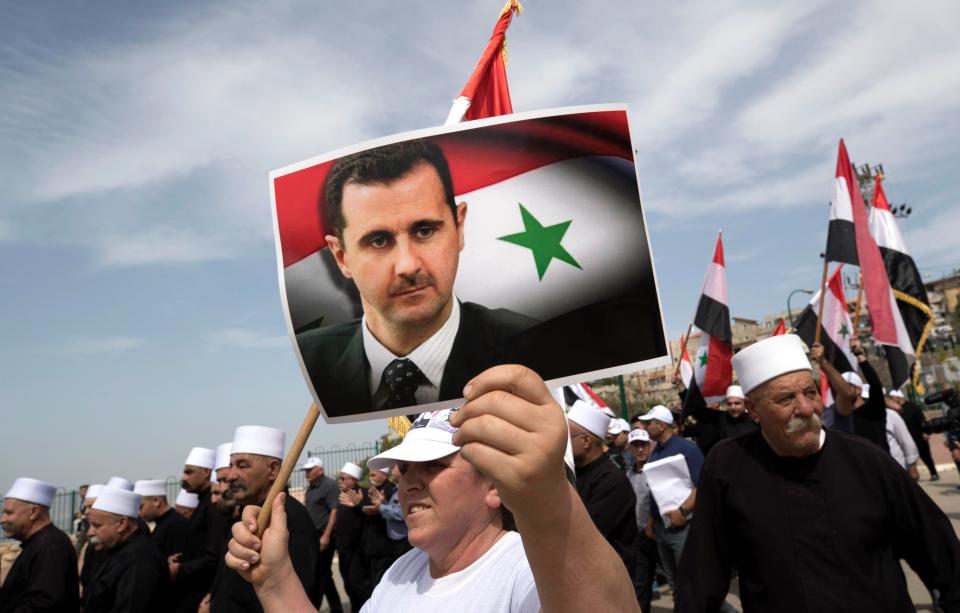 "I was very afraid," Noura says. "From that moment I knew I could never live like a normal person – I was now a daughter of the revolution."

That same day as the violence in the square a Syrian army officer, loyal to Assad, was pulled from his car by armed men, and killed in front of his son and nephew.

As the clock tower event had been a defining moment for Noura and the rebels, thousands of loyalists turned out at the officer's funeral, showing their support for Assad and his government.

Syria had been split down the middle. 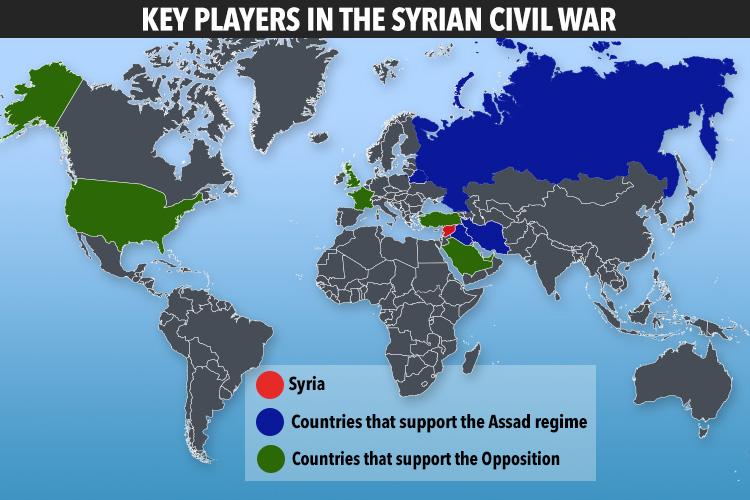 The anti-Assad rebels were united by their hatred of the president, but they were otherwise disparate, with different rebel factions clashing with each other as they pushed for their own kind of revolution.

As tensions rose, and Assad's army tried harder to suppress protesters, members of the movement started taking up arms to defend themselves.

After six months of protests, a full-scale civil war broke out.

Meanwhile, Western leaders, like then US President Obama, started calling for Assad to step aside. 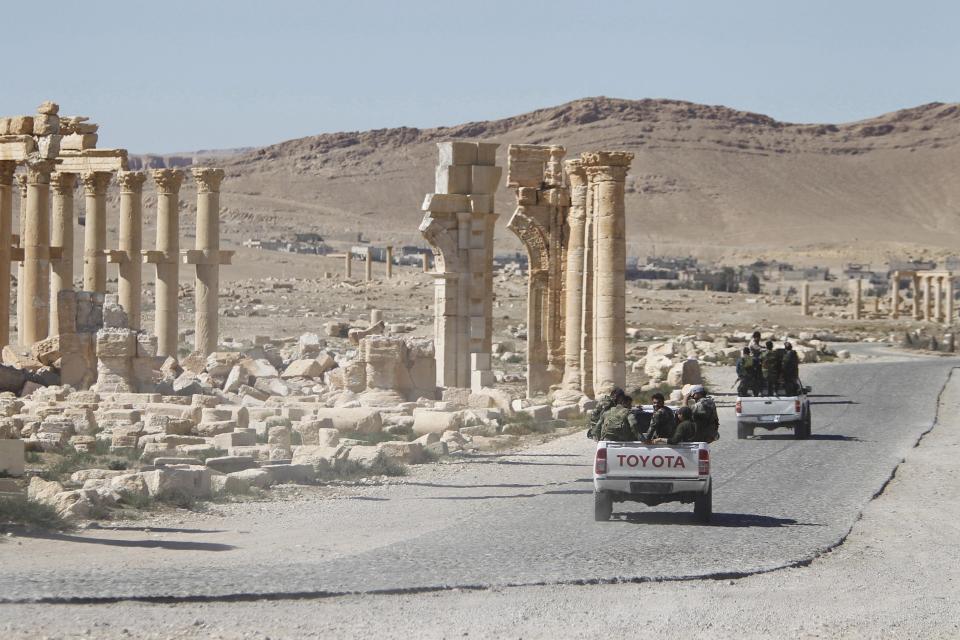 The rush to war

The United Nations arranged peace talks, but these went nowhere.

Western leaders largely wanted Assad to step aside, but he had a powerful ally in Putin.

The Russian leadership had long-supported the Syrian regime, with the USSR first establishing ties with the Syrian government in the 1970s.

Assad refused to step down voluntarily, and his enemies decided they would have to make him resign. 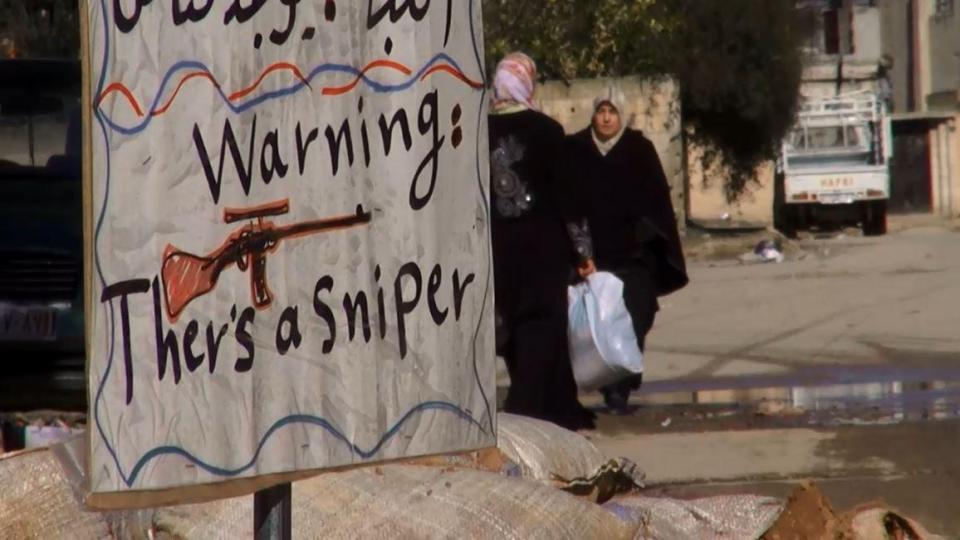 A rebel army, made up of civilians and led by soldiers who had decided to defect, was formed.

They were called the Free Syrian Army (FSA) – and they set their sights on conquering the populous city of Aleppo.

They thought that if they could liberate the city, they would quickly gain the upper hand, and be able to force Assad out by Christmas 2012.

But it wasn't meant to be – the FSA were ill-equipped and struggled against the official Syrian troops. 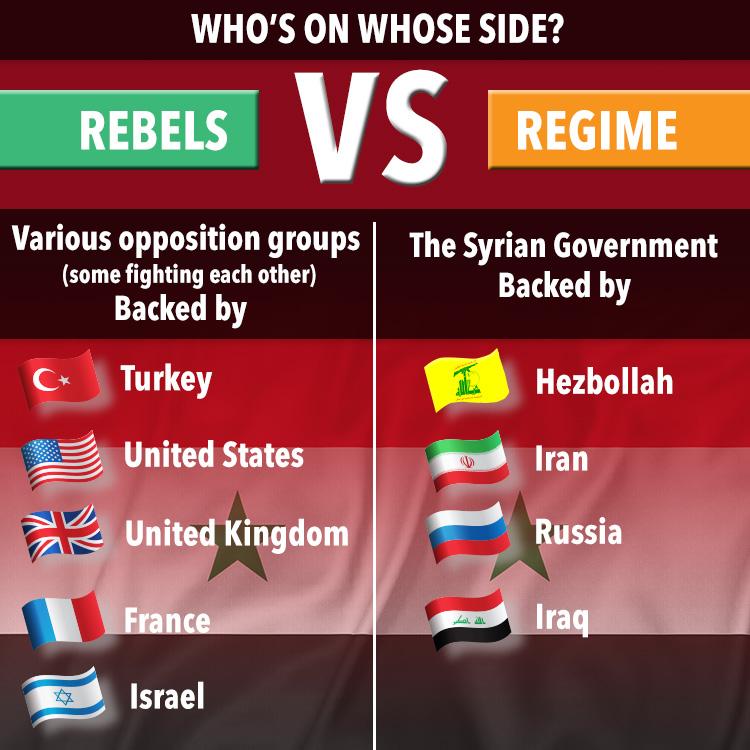 President Obama was reluctant to provide weapons to the rebels, but a clear line was drawn against the Assad regime – the use of chemical warfare.

During this time, Islamist groups had also started forming their own armies, some funded by Gulf States like Qatar and some backed by terrorists like Al-Qaeda.

Pro-Assad Iran and Russia stepped up their efforts to support the regime, fearing the US could sweep in and gain a foothold in the Middle East if the government fell. 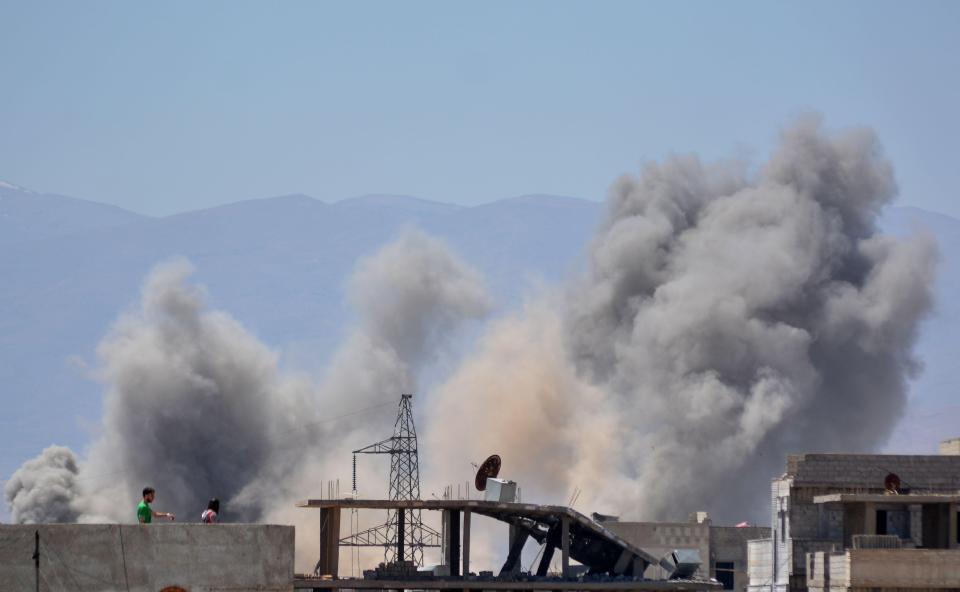 Hezbollah, the extremist Lebanese group backed by Iran, joined the Syrian Army, bolstering Assad – something the documentary describes as a "turning point".

As things became more tangled, the human cost was greater than ever, with six million Syrians displaced from their homes and many more trapped in Islamist rebel-held areas, slowly dying of starvation.

Then – worst of all – that September saw destructive Sarin gas chemical attacks on civilians in Damascus.

Many of the victims were young children – but although Assad had crossed a line, the West was reluctant to intervene, for fears of antagonising Russia and making the war worse. 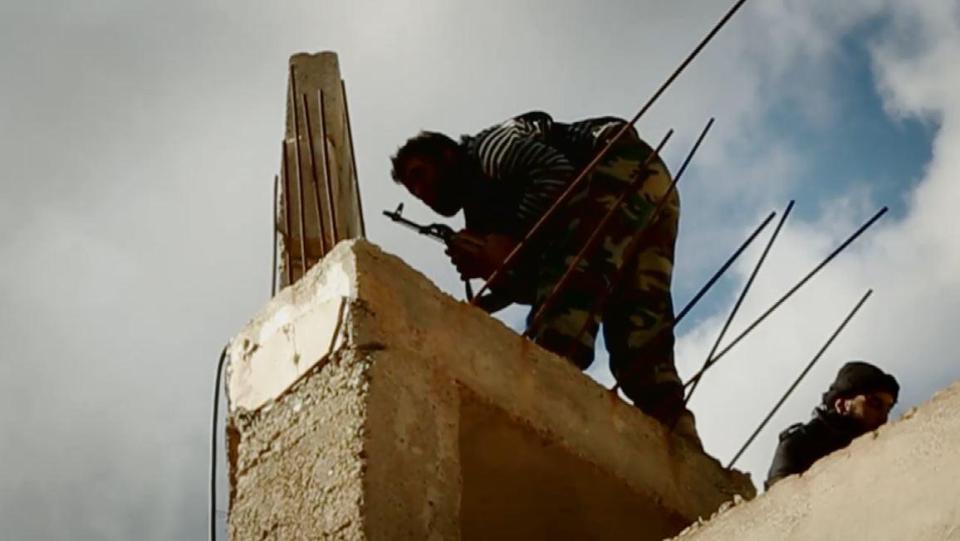 Islamic State joins the conflict in 2013

That would change with the arrival of a deadly new force – Islamic State.

The group used the chaos to gain the advantage, fighting against both the government and the moderate Syrian opposition.

On 4 March 2013, hundreds of people – a mix of radicals and moderate fighters – swept in to the city of Raqqa, driving out government forces.

With nobody in control of the city, moderate rebels called for democracy while IS – which ended up getting its way – wanted Sharia law. 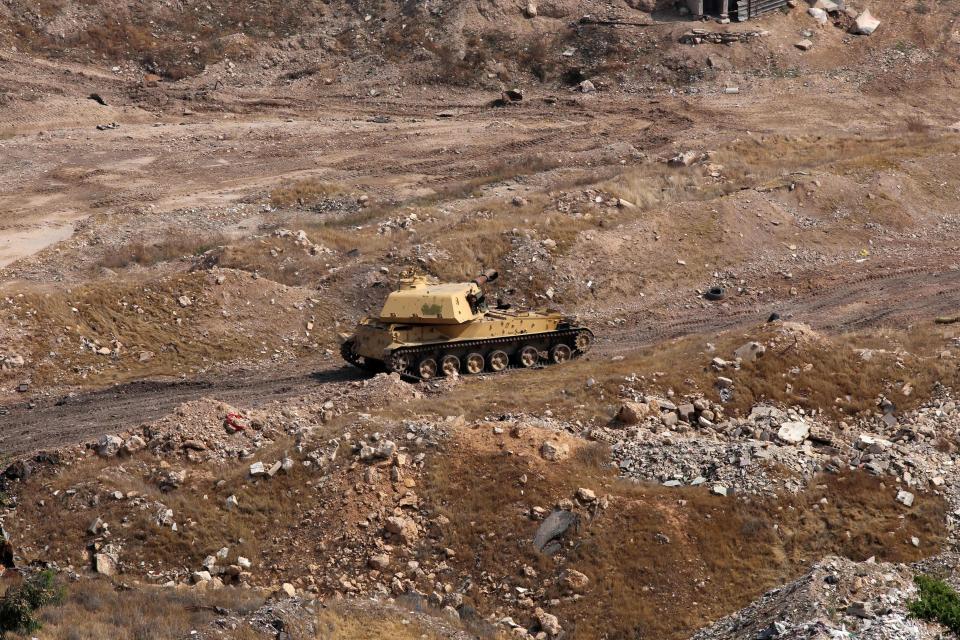 The terror group tightened its grip, assassinating rival leaders and imposing their strict interpretations of Sharia law on the residents of Raqqa, making the city their de facto capital.

Then IS began to take more areas of desert in the north of the country, also taking over the country’s lucrative gas and oil fields in these areas. 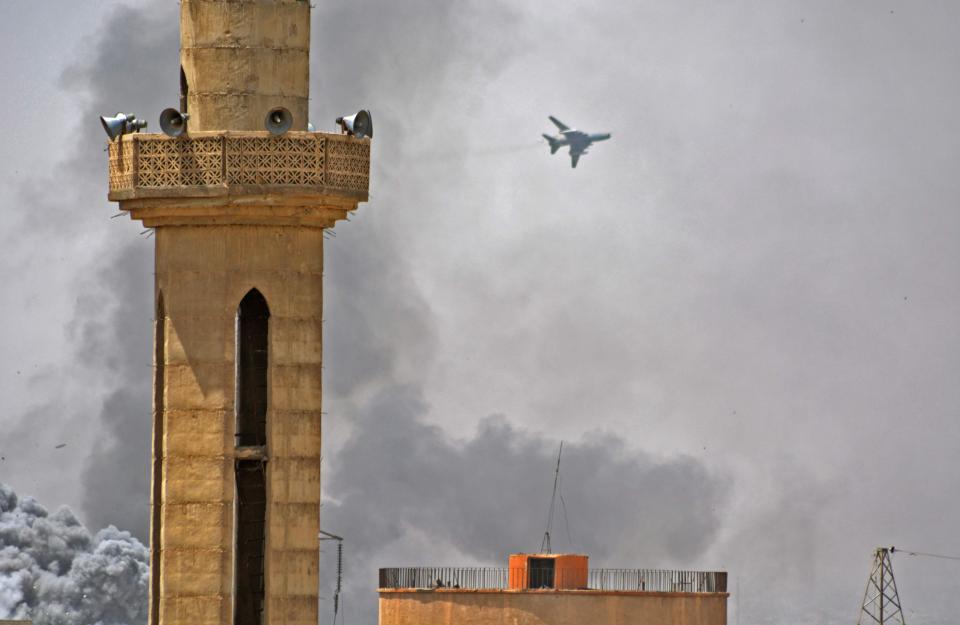 Fighting on the streets

The Syrian army – fighting for Assad – was losing and desperately needed more men. With the help of Iran and Hezbollah, a new pro-Government group – the National Defence Forces (NDF) was started.

In Aleppo, too, the rebels seemed to be winning.

Government supporters controlled only a couple of streets, in a deadly tug of war with paramilitary groups. One told Doucet they were “living in a nightmare”. 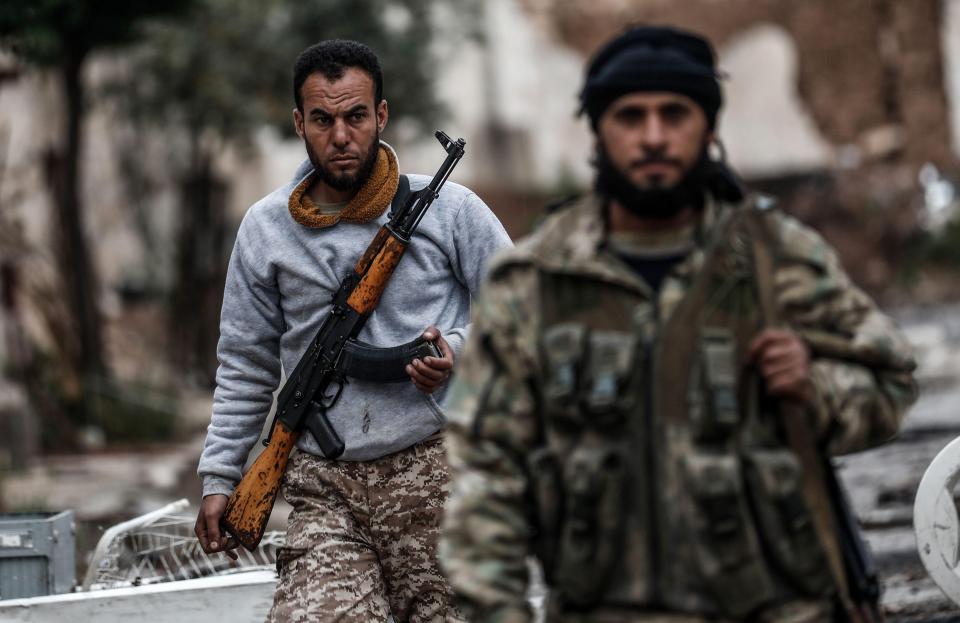 It was simply not just a Syrian war. With the interjection of these other groups, there were a lot of nationalities fighting. The front lines kept shifting for years while civilians gravely suffered.

This lead to a major refugee crisis. People poured into neighbouring Turkey and Jordan, then headed to the West.

The UN estimates 5 million people are refugees outside of Syria, while 6million have been displaced around the country. 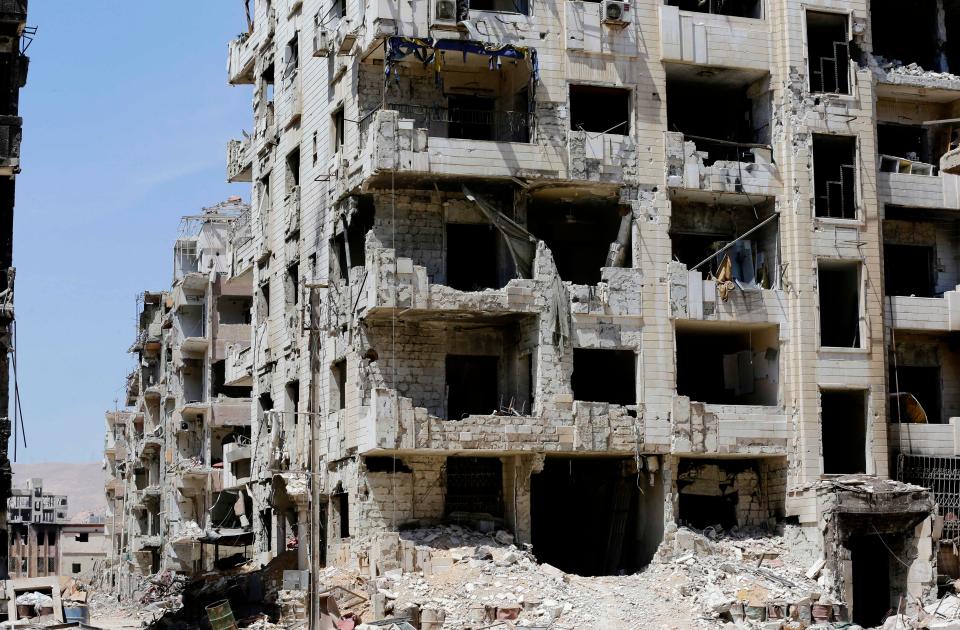 For three years, the US had held back from airstrikes against Assad – but they couldn’t sit by and do nothing while IS, plotting deadly terror attacks in the West, grew stronger.

So in September 2014, they sent their first fighter jets to the country.

Meanwhile, it looked as if the regime would lose control of Aleppo – many of the hard-line Islamist fighters joined the rebels there, and the rebels took the city of Idlib.

This is when Putin came in to lend a hand to his ally, and by October 2015, the first Russian planes appeared over Aleppo.

The UK was also pressurised into fighting – but against IS, rather that the regime.

With a Commons vote under David Cameron, we vowed to launch targeted airstrikes against ISIS held territory and became one of the many nations involved in Syria’s tangled war.

In total, the doc claims 75 countries have been affected by the crisis in some way: either by funding or supporting a group on either side, by taking part in strikes or through involvement with the displaced refugees. 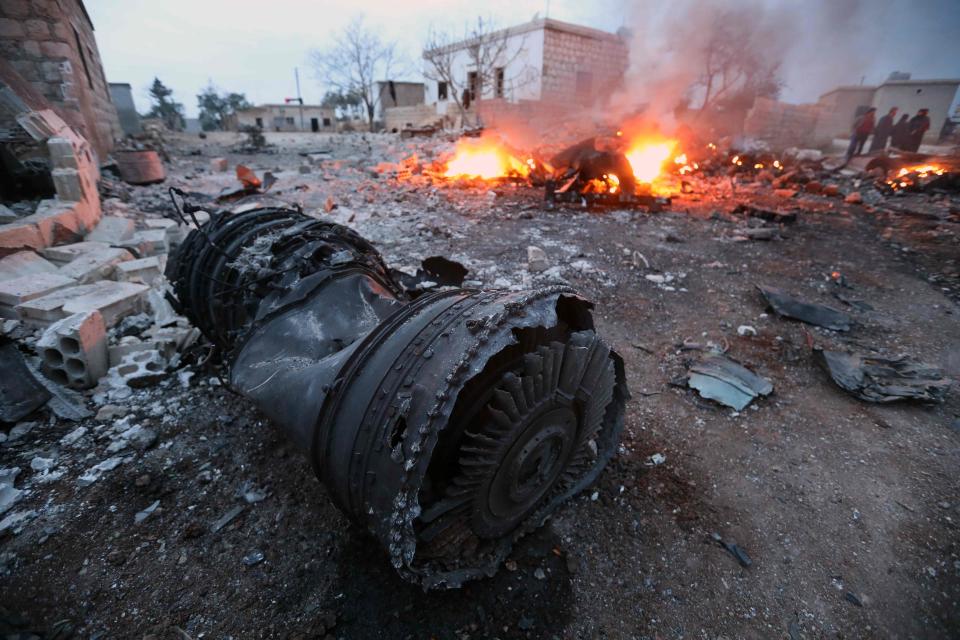 The whole time, the Syrian government had been bombing and besieging rebel-held areas, with many civilians caught in the crossfire.

Aleppo was bombed heavily by the Syrian government, and by summer 2016, much of the city was in ruin.

Russian and Syrian war planes pounded rebel areas of Aleppo, and the suffering of ordinary people was immense.

“We expected death every day because of the huge amount of shelling,” one doctor tells Doucet.

On 3 October that year, a chlorine gas bomb hit a hospital in rebel-held Aleppo in a targeted attack. “The smell of death was everywhere,” says one eyewitness.

Three medical workers were killed, and many more injured. Witnesses blamed pro-regime airstrikes, and the same hospital was bombed four times in just a few weeks. 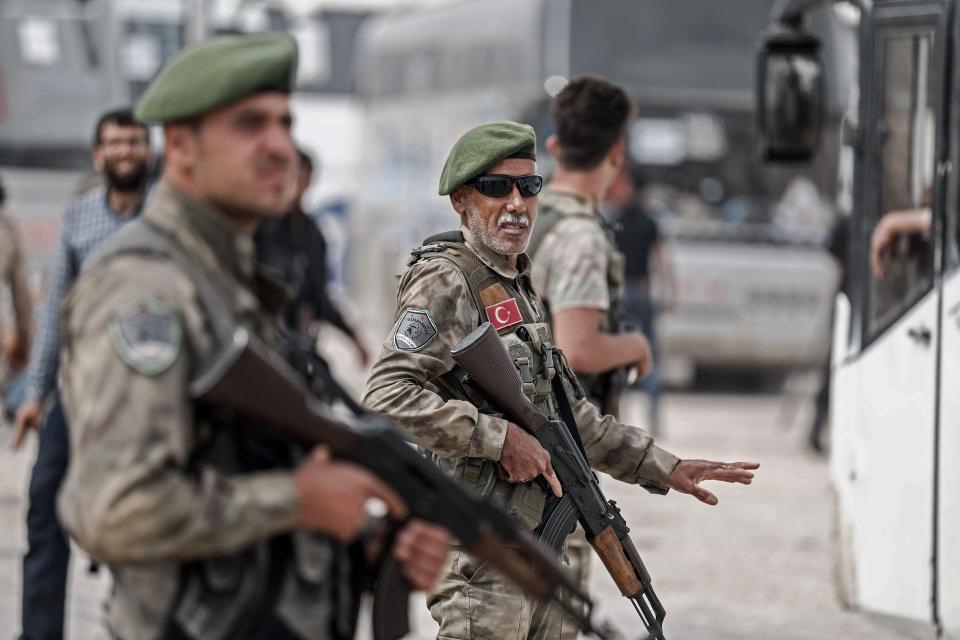 The deliberate targeting of hospitals is a war crime – but the Syrian Government said Al-Qaeda terrorists were using it as a base in order to justify their attack. The medical staff at the hospital said this was untrue.

By now, the Syrian army and its allies could sense victory.

The rebels, fatigued and out-gunned, were losing ground – and on 22 December 2016 the four-year Battle of Aleppo was over, won by the regime.

Clearly, Assad would not be brought down by military force.

Yet, the war is not over. A new regime offensive launched earlier this year to take back the last of the rebel enclaves in Syria.

And in April the suburban town of Duoma, on the outskirts of Damascus was targeted by a chemical weapon, killing 70 people.

France, the US and UK launched a joint targeted airstrike against the regime's chemical weapons facilities in response – sucking the West deeper into the mire of a war which has cost so much already.

Part 2 of Syria: the World's War airs tonight at 9pm on BBC2, and both parts can be viewing on BBC iPlayer.