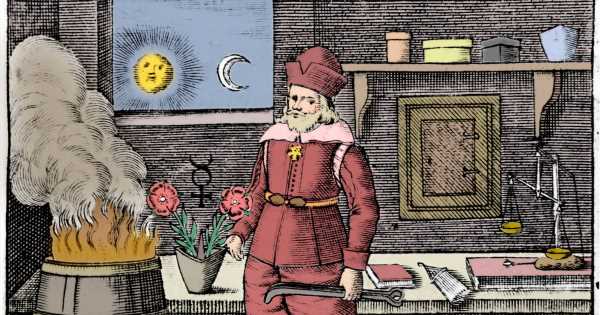 The quest for immortality has fascinated humans for as long as we’ve been around. And now eternal life could be a step closer. Scientists reckon people will be able to live forever as chatbots.

The bot would mimic individuals by storing up a vast database of things they have said and done. But, as Nadine Linge reveals, there have been many attempts by humans to prolong life for all time – often with deadly results…

Russian medic Alexander Bogdanov was a blood transfusion pioneer and thought by transferring the blood from youngsters into his own body, he could live forever.

After 11 transfusions he claimed he stopped losing hair and his eyesight improved. But after using the blood of a student who had been suffering from malaria and tuberculosis, Bogdanov, right, died in 1928 aged 54.

You might know the Philosopher’s Stone from the Harry Potter series but from the Middle Ages onwards, alchemists tried to create it in the belief it could make them immortal. Mercury was often an ­ingredient in these recipes – which may have proved deadly.

Sir Isaac Newton, who was deeply interested in the Philosopher’s Stone, showed signs of mercury poisoning later in his life.

Diane de Poitiers was the mistress of the French king Henry II and famed for her youthful beauty which she maintained well into her life.

She credited her apparent lack of ageing on her “drinkable gold” – a concoction of gold chloride and other chemicals. She died aged 66 in 1566. Her remains were dug up in 2009 and scientists found evidence of gold poisoning.

In his search for immortality, Qin Shi Huang, right, the first emperor of China, provided 6,000 virgins to a magician who said he could create a life-extending potion.

He also went to sea to shoot a magic sea monster. He died in 210BC aged 49 after eating mercury pills in an ­attempt to gain eternal life.

Writer FM Esfandiary believed in “transhumanism”, the idea that with technology, humans will eventually solve all their problems, including death.

He predicted there would be “indefinite life expectancy” and later changed his name to FM-2030, in the belief that’s when humans would achieve immortality.

He died from cancer in 2000 aged 69, but his body was cryogenically preserved in Arizona, US, where it remains today.

In 2009, Russian scientist Anatoli Brouchkov claimed he’d found the secret to eternal life when he discovered a bacteria in Siberia which was 3.5million years old. Despite its age, it was still alive.

So he injected himself with it. Now 64, he claimed to never get the flu ­afterwards and to be able to work harder and longer without getting tired.

In 2017, retired biology professor Dr Marco Ruggiero launched a probiotic supplement meant to improve the production of klotho, a protein described as an “ageing suppressor” found in the guts of long-living humans.

After a year of trying his Immortalis Klotho Formula on himself, Ruggiero claimed his bald patch was gone and he was planning his 150th birthday.