Fancy being neighbours with Bill Nighy, Stephen Fry and Judy Dench? This striking six-storey ‘castle’ near picturesque town of Aldeburgh and a host of A-list celebrities is yours for £1 million

A striking six-storey home which was made to look like a medieval castle to disguise a water tower inside has gone on the market for £1million.

The spectacular 1920s building in picturesque Thorpeness, Suffolk, was covered with mullioned windows and parapets.

Its Water Tower had been disused since the 1980s and Northumbrian Water sold to a pharmacist for £407,000 at auction in 2007. Its water tanks were taken out of the upper floors 20 years ago.

And now the property is a stone’s throw from celebrity Bill Nighy’s house in Adleburgh, Sussex, and half an hour’s drive from A-listers Stephen Fry and Judy Dench. 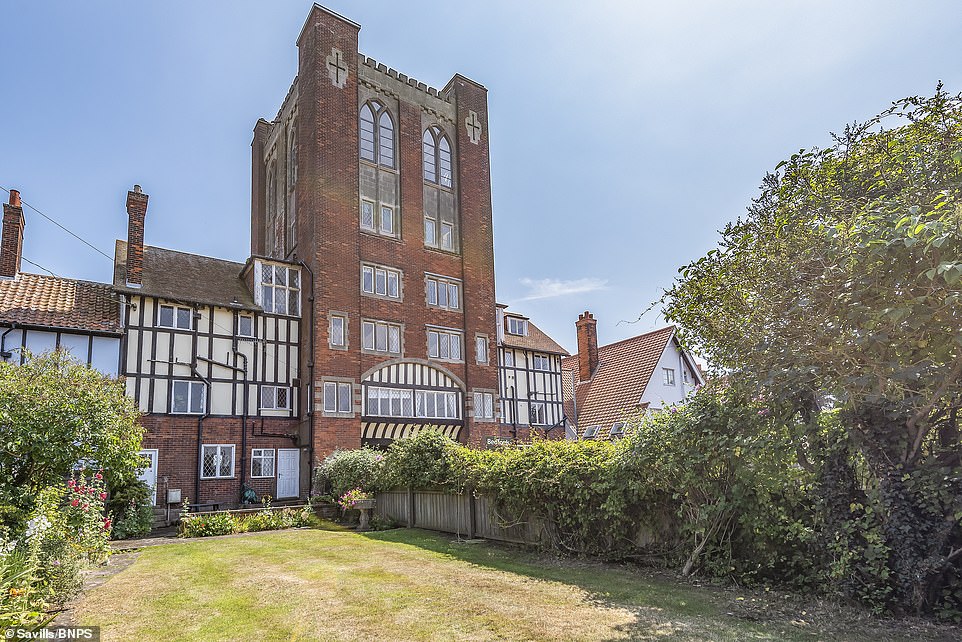 A striking six-storey house which was formerly a water tower and sold to a pharmacist for £407,000 at auction in 2007, is on the market for £1million. The mock Tudor style building was designed by architect William Gilmour Wilson and overlooks the Thorpeness Country Club 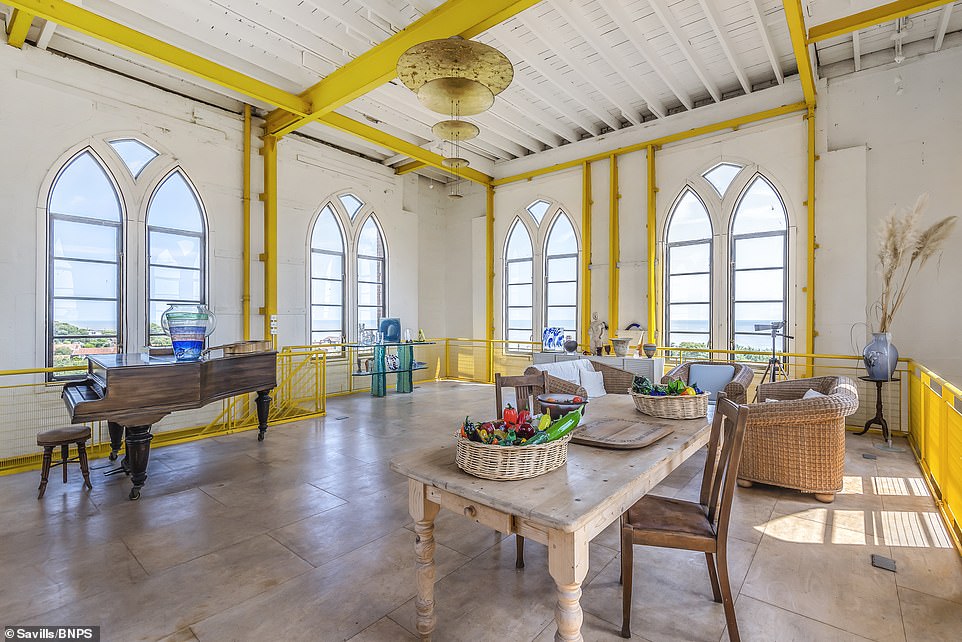 The fourth-floor is light and airy – boasting breathtaking views across the country club. The high-rise ceilings are decorated with a gold light and the white washed walls are perfectly off-set by the bumble-bee wall structures holding the 1920s build. A grand piano and minimal lounge chairs overlook the views 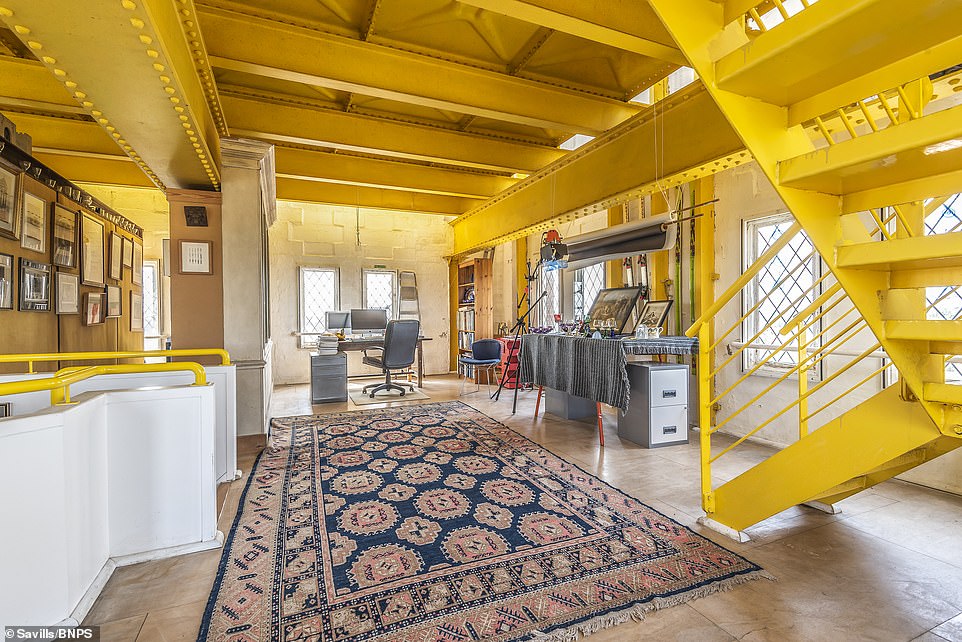 The property combines vibrant coloured industrial fittings with minimalist soft furnishings. A statement tapestry-style rug is spread across the floor and leads to a study area

The Grade II listed West Bar has been put on the market as a five bedroom home  with a top floor converted into a large entertaining space which provides beautiful panoramic views of the Suffolk coast.

It was inspired by JM Barrie’s children’s classic Peter Pan and designed by  by architect William Gilmour Wilson.

On the ground floor there is an entrance hall and a rear hall, while the first floor contains a drawing room and a kitchen-dining room.

The second floor has three double bedrooms and a bathroom, with two more bedrooms on the third floor. 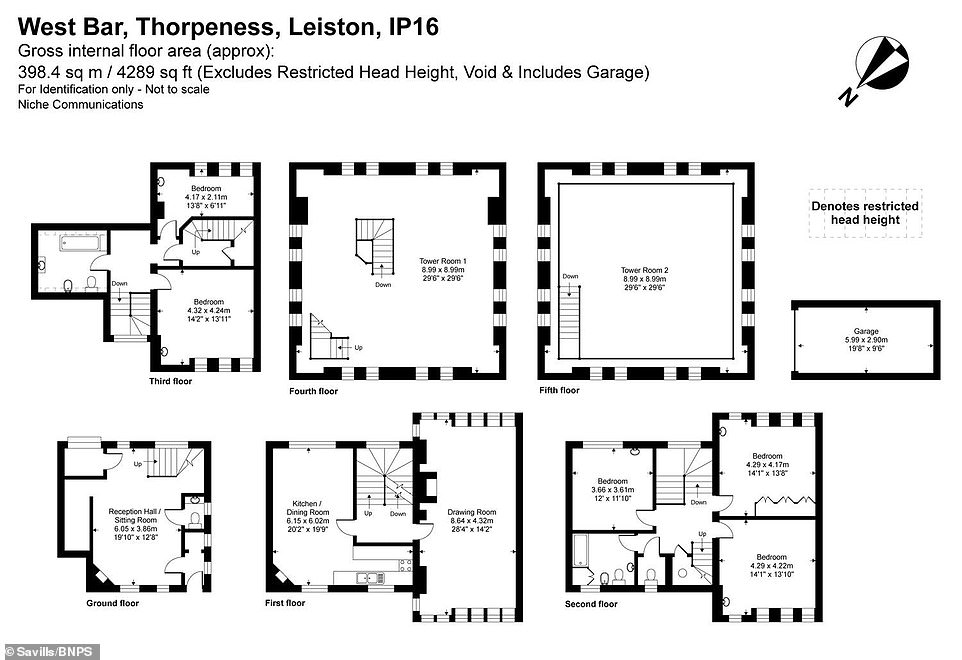 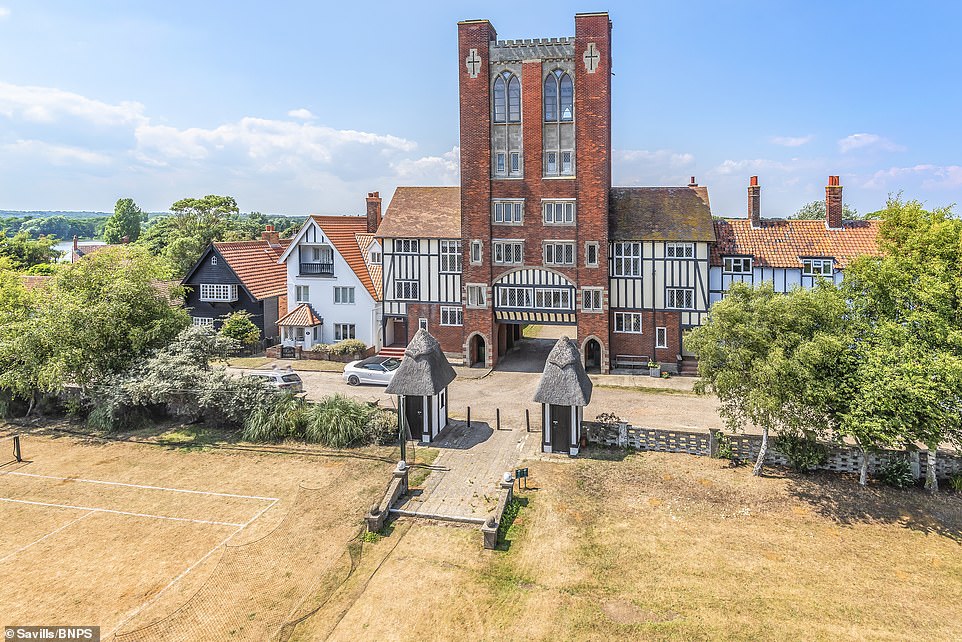 The fourth floor is used as an office and library and the building got planning permission for a conversion in 2012.

The property, which is a one minute walk from the beach and overlooks a country club, also has a terraced garden and a garage. It is two miles from the popular seaside town of Aldeburgh.

Property agent Peter Ogilvie, from Savills Ipswich, said: ‘The five bedroom property has enormous character and is light and bright, with near full length windows and a mix of traditional rooms across five floors.

‘The views really are very rare, overlooking the coastline both north and south towards Aldeburgh but also over the Meare boating lake, the marshes and countryside beyond.

‘The house is positioned remarkably well in the centre of the village overlooking the country club yet just a moment’s walk from the beach – it is a unique opportunity to purchase a piece of history in one of Suffolk’s most popular destinations.’

The creation of Thorpeness, which was later designated an Area of Outstanding Beauty, was down to the Scottish barrister Glencairn Stuart Ogilvie who wanted a place to be a playground for his family and friends. Work on the Suffolk town started in 1910. 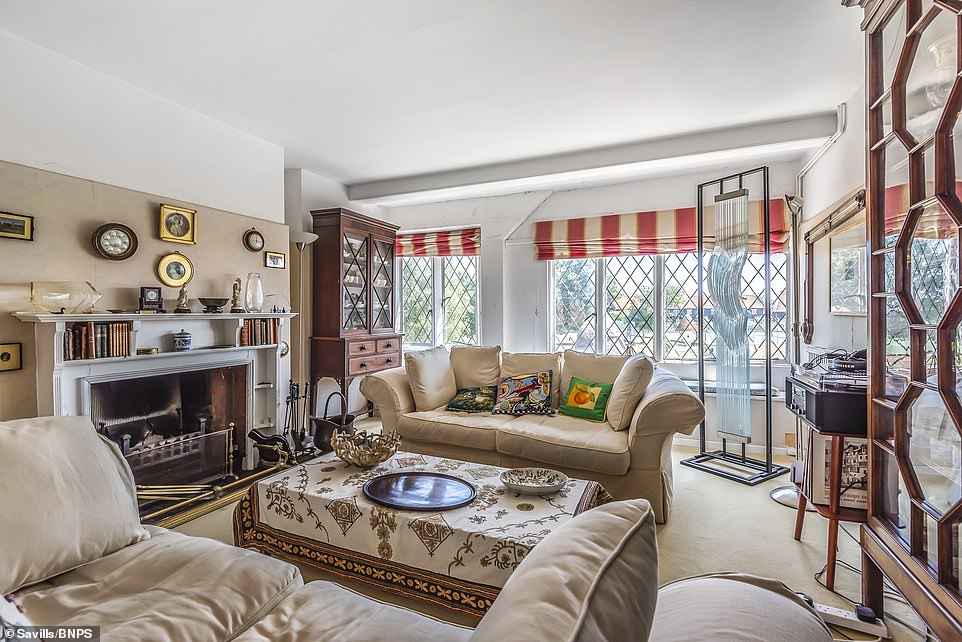 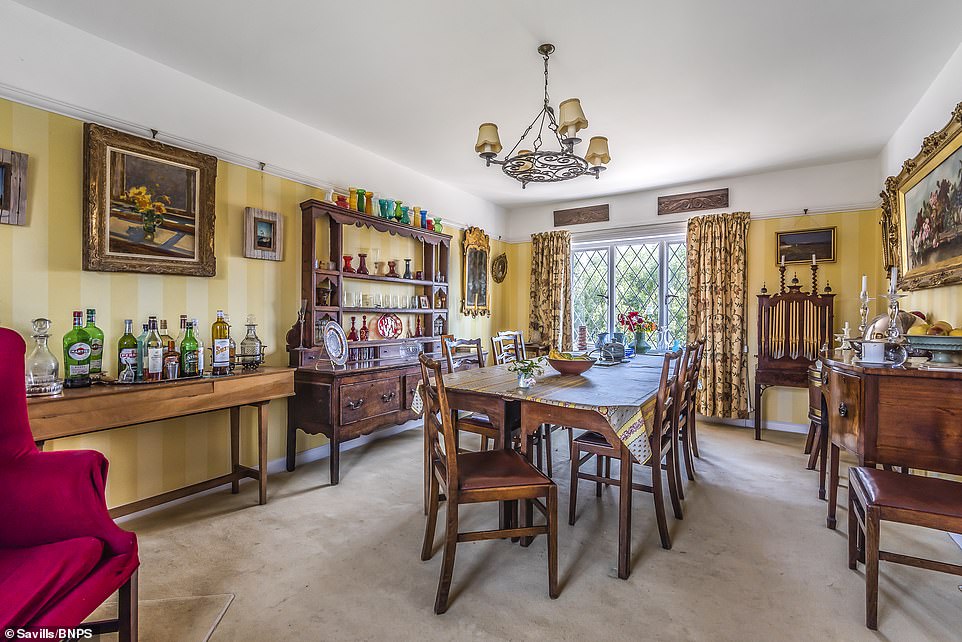 The dining room sits across the foyer to the drawing room and provides the perfect setting for a glass of tipple. Classical wooden furnishings and curtains make it the ideal converted home 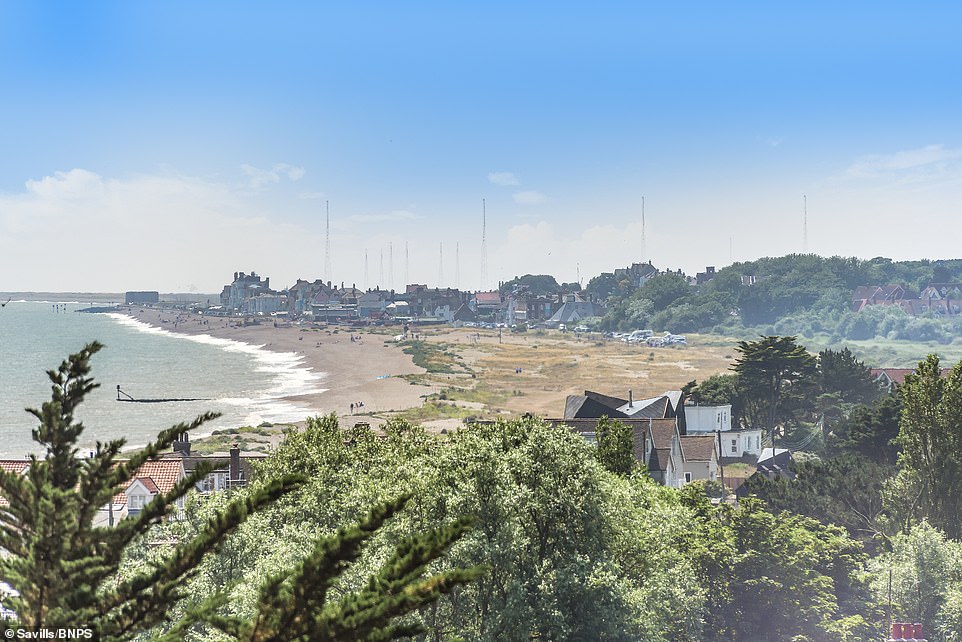 The sprawling Suffolk coastline can be seen stretching for miles from the West Bar property’s windows. Far beyond the greenery, holiday-makers can be spotted lining the beach 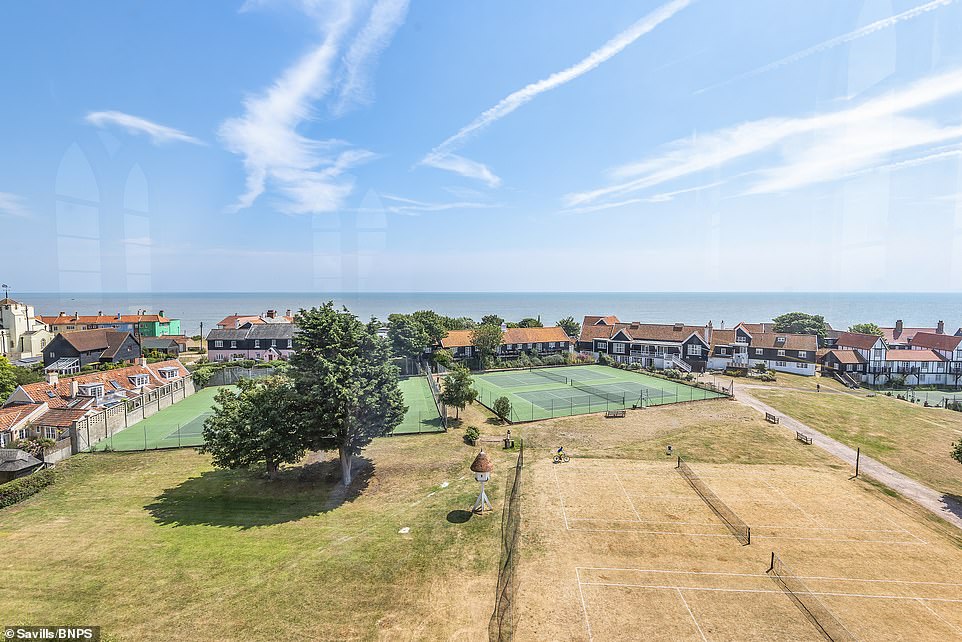 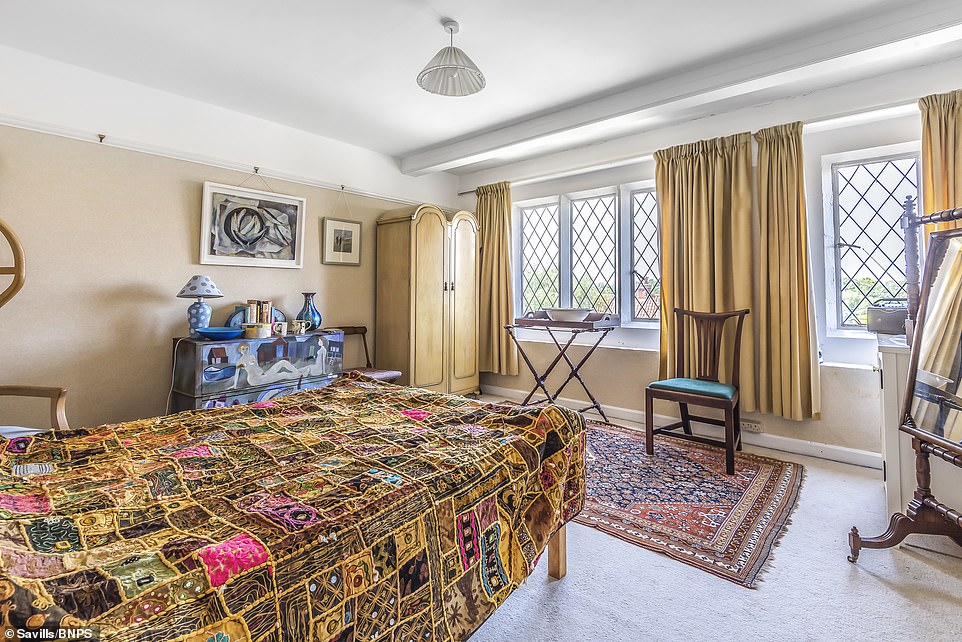 A double-bedroom contains ornate decorations and golden curtains. The spectacular 1920s building in Thorpeness, Suffolk, was covered with mullioned windows and parapets – but the water tanks were taken out of the upper floors 20 years ago