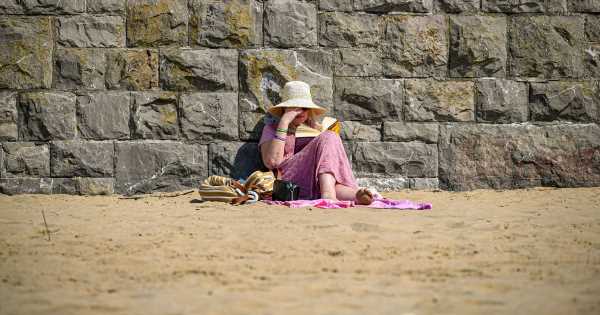 The stunning warm weather is set to continue as the second weekend of pubs being open approaches.

Temperatures should reach 15C with highs of 16C on Thursday giving Brits even more time to relax and soak up the sun.

The Met Office is predicting that most of the country will see sunshine so no one should feel left out.

Things may start a little nippy on Thursday morning with some frost about but this will make way for some "strong April sunshine".

Lows of 1C are forecast for some parts of the UK after sunrise before it hits the hot 16C high.

Later in the day things may start turning a little breezy in parts as windy weather sweeps in to unsettle things.

The Met Office said: "The forecast for Thursday involves a lot of sunshine for most of us.

"A cold and frosty start to the morning, but quickly warming up under blue skies and strong April sunshine

"Cloudier in parts of western and northern Scotland, with some showers for Shetland.

"Breezy in southwest England, especially near the coasts and over the moors"

'Gusty winds' in the afternoon are set to sweep the southern parts of the country.

And the good news is that the weather boffins are all in agreement with BBC forecaster Nick Miller also predicting sunshine on Thursday.

"There'll be clear skies overnight which will lead to widespread frost going into Thursday," he told the Daily Express.

"Most places will see plenty of sunshine on Thursday afternoon.

"The wind will not be pronounced along the North Sea coast but a noticeable easterly wind.

"Temperatures will be higher than Wednesday.

"And it will feel warm in that sunshine."

So far this month it has been particularly dry with the Met Office reporting that up to April 20, the UK as a whole had only recorded 18% of its average April rainfall – so much for those April Falls.

However, what was lost in rain was gained in cold with many places seeing at least twice as many frosty nights this April than seen on average.