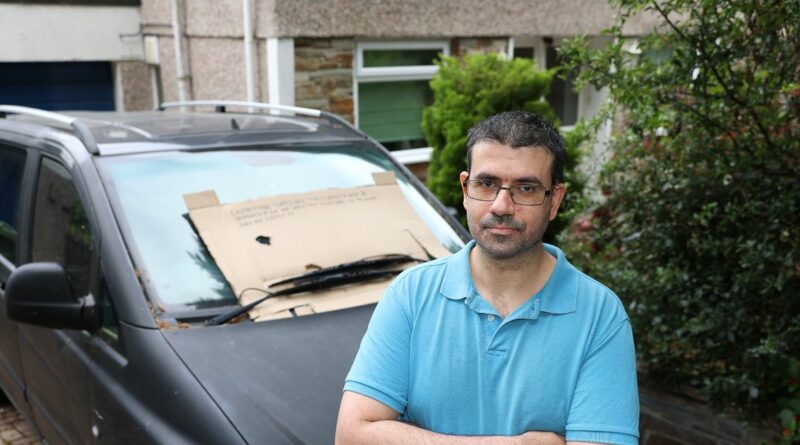 A man who 'stupidly' allowed a stranger to park on his drive more than seven months ago is still stuck with it.

Omar Badran agreed to let someone use his driveway back in December 2021 because he doesn't drive himself – but says the motorist has outright refused to collect the vehicle.

Now Omar says the whole ordeal has made him miserable, with many people calling him stupid for letting the driver park there in the first place.

READ MORE: Brawl at Mrs Brown's Boys show and some fans 'thought it was part of the act'

"This entire thing has made me really miserable and so many people have told me I’m stupid for having allowed him to park on my driveway, but I was just trying to do a nice thing,” said Omar, of Stoke in Plymouth.

“I agreed on the condition that when I wanted to use my driveway again, I would be able to.”

With no luck in getting rid of the car, Omar says he has since explored legal avenues but was baffled to hear it was legally considered a ‘grey area'.

He told Plymouth Live: “I was shocked by my initial search, it’s legally a grey area and you might not be able to get the council, police or the DVLA to do anything about it, even though the vehicle is uninsured, isn’t taxed and has no MOT.

“I phoned up all these places and they said they couldn’t do anything.”

After several weeks of stress, Omar says he has found a solution under the tort law.

“I found that under the Torts Act there is a way to deal with it. It took me several weeks and lot of stress, I thought I was going to be stuck with a really bad situation that would involve thousands of pounds spent in a civil court,” he said.

Omar has now put a notice on the windscreen of the car, which reads: "Under the Torts Act, this vehicle will be disposed of in one week from 27/06/22 if the owner does not collect it.”

After discussion with several legal professionals, Omar has been further instructed that he should contact the owner of the vehicle in writing and allow for a reasonable time to pass before disposing of it.

He said: “I have been told by a solicitor that I should contact the person in writing. I have been told to fill in a V888 form which will allow me to have access to the person's address and then I can write to them and quote the Tort Law Act.

“There isn’t a specified time in the act but it just specifies that the time give for the individual to respond should be ‘reasonable,’ so I’ve decided to give him two weeks once I get the address from the DVLA.

"This entire thing has made me really miserable, I was just trying to do a nice thing.”