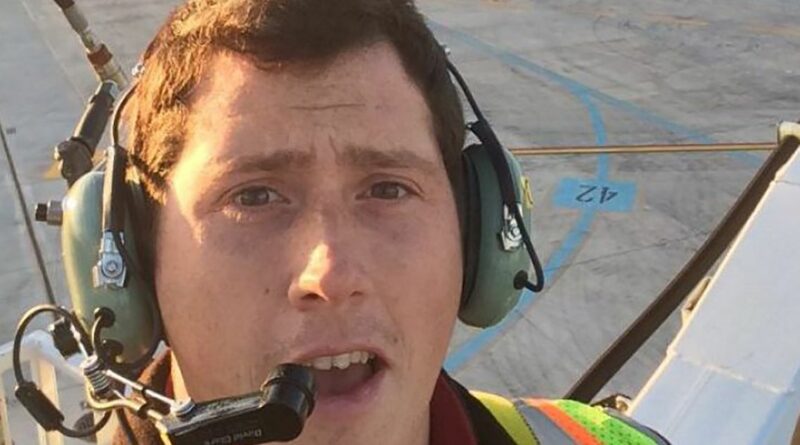 A suicidal airport worker who killed himself by stealing a plane and crashing it after doing barrel rolls left airline officials secretly impressed with his flying skill.

Richard Russell took off from Seattle-Tacoma International Airport in Washington state, USA, at 7.32pm on August 10, 2018 and flew, tailed by F-15 Eagle jets, until the plane crashed at 8.47pm into Ketron Island, located 25 miles south-west of the airport.

The 29-year-old airline employee, who had no pilot license and was only allowed to handle baggage and clean aircraft in his role, learned to fly a plane using computerized flight-simulator programs or what he called “video games”.

In recordings of a conversation with an air traffic controller during the ill-fated flight, Russell is asked if he needed help controlling the aircraft and he responded: “I don’t need that much help. I’ve played some video games before.”

Russell, who was the only person on the plane, made headlines when he did barrel rolls in the stolen twin-turboprop Bombardier Q400 passenger plane, that may have looked sloppy to experienced pilots.

However, the fact that the former bakery owner was able to taxi onto a busy runway, take off and mix in aerial acrobatics for more than an hour before he went down baffled some experts, and even impressed them.

Mary Schiavo, an aviation attorney and former inspector general of the Department of Transportation, said video of some of his turns looked smooth, or “coordinated” in pilot parlance.

However, he added: “Flying an airplane is totally different than playing a game.”

It is thought that Russell may have picked up some knowledge of the aircraft over the course of his job.

In addition to baggage handling, his work as a gate-service agent included work on two-person tow crews responsible for moving aircraft around gates and maintenance areas, Seattle Times reported around the time of the incident.

During his flight, Russell showed off a basic familiarity with the cockpit, wearing the communications headset, watching the fuel gauge, and talking with an air traffic controller about how to pressurise the plane.

Russell, was an employee of three and a half years with Alaska Airlines’ regional subsidiary Horizon Air and passed the background checks necessary.

“On any other day that was windy, or that was cloudy, or had [bad] weather, I don’t think he would’ve been able to pull a stunt like that,” said Jeffrey A. Lustick, a Bellingham aviation lawyer and pilot.

The Samaritans is available 24/7 if you need to talk. You can contact them for free by calling 116 123, email [email protected] or head to the website to find your nearest branch. You matter.