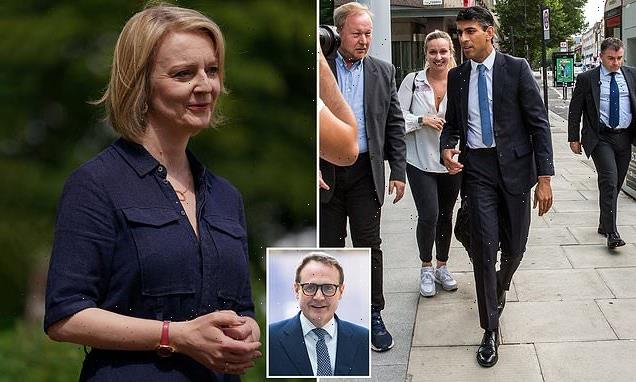 Mr Tugendhat was seen as the leading One Nation Conservative candidate in the race for the party leadership before being knocked out last week. His endorsement boosts Ms Truss’s claim she can unite the Conservative party in this contest.

Chair of the foreign select committee Tom Tugendhat said he supported the frontrunner’s pledge to cut taxes, saying they were ‘founded on true Conservative principles’.

Writing in The Times, Mr Tugendhat argued it was ‘not right’ for the public to shoulder the highest tax burden in 70 years while people look to the winter with ‘dread’ amid rising costs.

Mr Tugendhat is the latest heavyweight to back Ms Truss, after defence secretary Ben Wallace – one of the most popular figures in the Conservative party – also endorsed her. 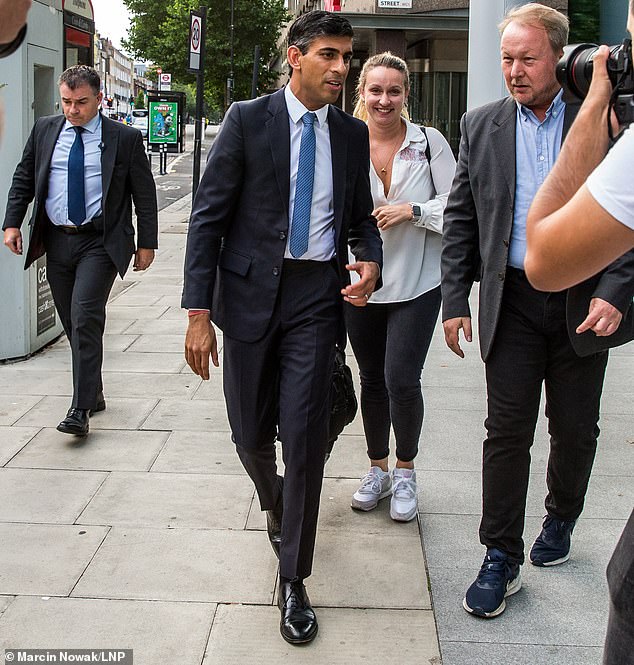 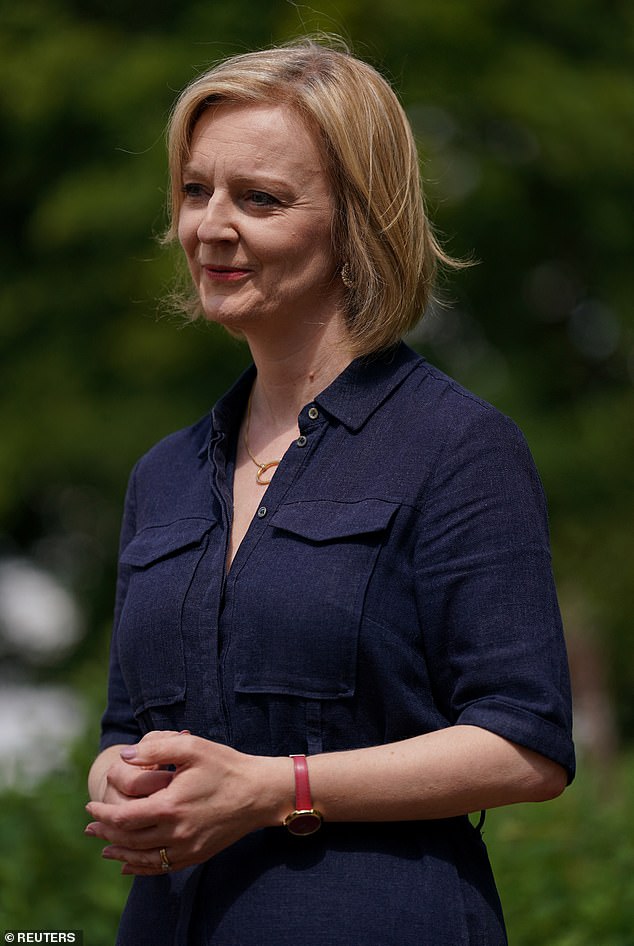 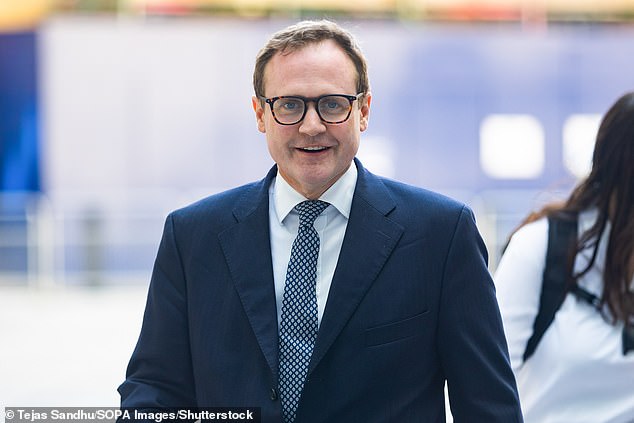 Rishi Sunak defended his own tax plan while being grilled by Andrew Neil on Channel 4 on Friday – rejecting accusations that his policies would lead the country into a recession.

The former chancellor warned Ms Truss’s plans for vast tax cuts would pour ‘fuel on the fire’ of inflation.

Ms Truss’s pledge to cut taxes if elected the next Conservative leader have been a cornerstone policy in a contest that has seen her consistently leading in the polls among Tory party members.

Mr Sunak U-turned on his tax plans earlier this week by promising to slash VAT, though the move does not seem to have succeeded in shoring up support in the Tory membership.

According to a BMG poll for the i paper, 43 per cent of Conservative members think Liz Truss would do a better job as Prime Minister, compared to just 32 per cent for Rishi Sunak.

In the race to make up ground before the contest ends in September, Mr Sunak is expected to launch an attack on ‘woke nonsense’ today. 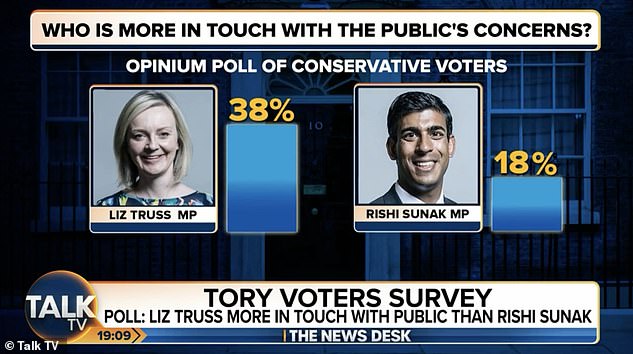 A poll carried out by Opinium found that 38 percent of Tory voters said the Foreign Secretary is most in touch with the public’s concerns, compared with just 18 percent who sided with the former Chancellor on the question

In a speech to party members in West Sussex, Mr Sunak is expected to harden his rhetoric on identity politics by taking aim at ‘left-wing agitators’ trying to take ‘a bulldozer to our history, our traditions and out fundamental values.’

He will also promise to review the ‘Trojan Horse’ 2010 Equality Act ‘that has allowed every kind of woke nonsense to permeate public life’.

Meanwhile, Liz Truss has pledged to reintroduce grammar schools to Britain and unveiled plans to help first-time buyers to get on the housing ladder as she looks to hold on to first place in the leadership contest.

When asked if she was confident she would win the leadership, Ms Truss said: ‘I’m not at all complacent. I’m fighting for every vote across the country.’

In a stab at Mr Sunak’s record as Chancellor, the Foreign Secretary said it would be ‘risky’ for the country to keep on the current economic path.

Ms Truss said she wanted to create growth by ‘help people and businesses keep more of their own money’, saying the ‘number one priority should be avoiding recession’.

Rishi Sunak was questioned on his campaign, as well as his wife’s tax status on Andrew Neil’s Channel 4 show. Liz Truss has also been invited to appear on the show but has so far declined.

Mr Neil said Mr Sunak wanted to keep taxes high at a time when ‘the global economy grinds to a halt, as monetary policy has been tightening’, suggesting he would ‘ensure a recession’.

Mr Sunak said: ‘I think it’s absolutely the right thing to do to not put fuel on the fire of the inflation problem that we already have.

‘What we should do is focus on long-term growth because that’s what we need, sustainable growth, not a sugar rush boom that will make us feel better for months, but then it runs out of control, let inflation get set into the system, let the Bank of England have to react with even higher interest rates.’

Mr Sunak said a recession was ‘not the forecast of the majority of most independent forecasters here in the UK’ and denied that his pledge to cut VAT on energy bills was a U-turn that demonstrated ‘bad judgment’.

On immigration, Mr Neil pressed him on why he wanted to turn away ‘even legal asylum seekers’.

Mr Sunak replied: ‘Because there is a finite amount of asylum seekers that we are able to integrate and accommodate.

‘At any moment in time, Andrew, there are probably a billion people that would love to move to the UK because this is an amazing country, so we clearly can’t accept all of those.’

The millionaire ex-chancellor was also questioned on his wife’s previous non-domiciled tax status – an arrangement which reportedly saved her millions, saying: ‘I’m the one running for office and not my wife.’

The Foreign Secretary has committed to a range of tax cuts that will cost around £38 billion a year. She would cut tax ‘from day one’ as Prime Minister. She would cancel the planned 6 per cent rise in corporation tax next spring, and scrap the 1.25 per cent national insurance hike, currently costing employers and employees £12 billion a year. She would also halt green levies on energy bills for two years and wants an expansion of marriage tax-break rules to allow couples to transfer their full income tax allowances to the earning partner.

Truss would treat Britain’s Covid debt like the nation’s wartime debt of the 1940s, placing it on ‘longer-term footing’. 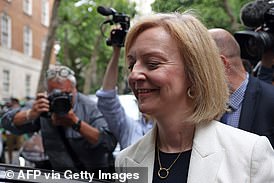 The Foreign Secretary has committed to a range of tax cuts that will cost around £38 billion a year. She would cut tax ‘from day one’ as Prime Minister

The former Chancellor has largely resisted calls for immediate tax cuts, arguing they would stoke inflation. The nation needs ‘honesty and responsibility, not fairy tales’. He has pledged to cut taxes only when inflation is under control.

Sunak has repeatedly stressed the need to balance the nation’s books after exceptionally high spending during the pandemic. ‘Borrowing your way out of inflation isn’t a plan,’ he says. A government has a duty to reduce debt rather than passing the problem on to ‘our children’.

He will stick to Nato’s target of spending 2 per cent of GDP on defence, saying that the number is a ‘floor not a ceiling’ and that it could be exceeded. He has refused to commit to Boris Johnson’s promised higher rate of 2.5 per cent. 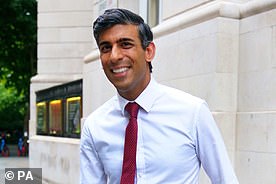 The former Chancellor has largely resisted calls for immediate tax cuts, arguing they would stoke inflation. The nation needs ‘honesty and responsibility, not fairy tales’. He has pledged to cut taxes only when inflation is under control