Sweden’s top virologist has admitted he is ‘not convinced at all’ that the country’s lockdown-free strategy is right – as Sweden saw a sharp fall in its daily death toll and number of new infections today.

The Scandinavian country has become a closely-watched case after keeping bars, restaurants and secondary schools open throughout the pandemic.

State epidemiologist Anders Tegnell has become the face of that strategy, but he admitted in an interview with Aftonbladet that he was not sure if it was right.

‘I’m not convinced at all. We are constantly thinking about this at the [public health agency]. What can we do better and what else can we add on?,’ Tegnell said.

‘I think the most important thing all the time is to try to do it as well as you can, with the knowledge we have and the tools you have in place. And to be humble all the time because you may have to change.’ 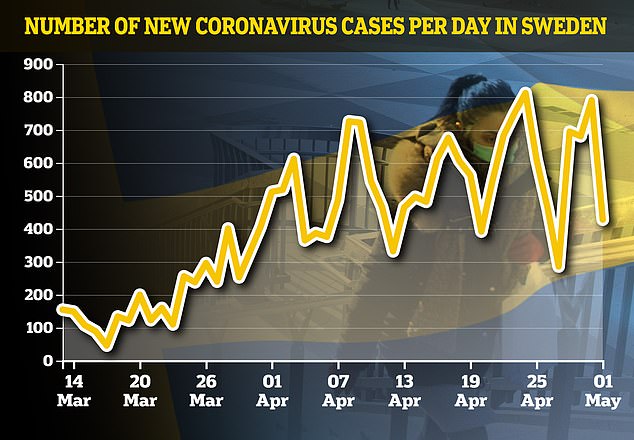 Sweden’s daily number of coronavirus cases, shown on this graph, fell to 428 today after more than 600 cases per day in the previous three days 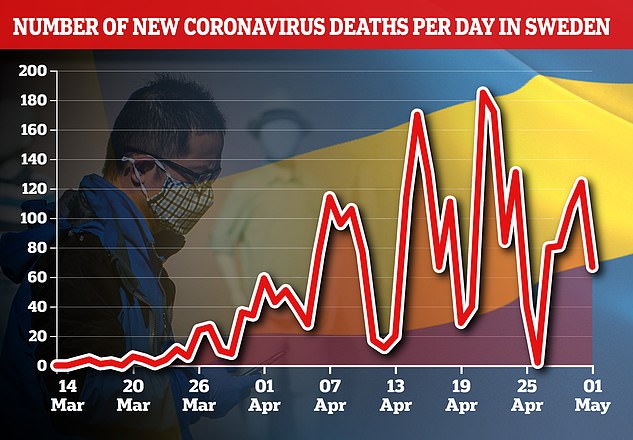 The daily death toll, shown on this chart, fell to 67 today after two consecutive days of more than 100 fatalities 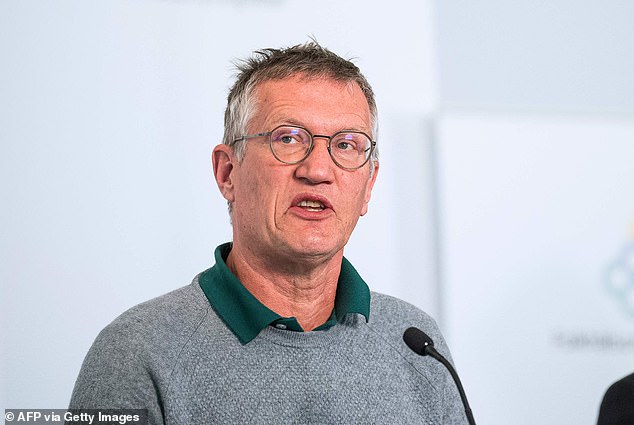 Sweden’s state epidemiologist Anders Tegnell, pictured, admitted he had doubts about his own policy, saying it was constantly being reviewed

Sweden’s daily figures have been highly erratic, and a fall in numbers has often been followed by a surge when a backlog in cases is fully accounted for.

International opinion has been mixed, with Donald Trump taking aim at Sweden yesterday and claiming that it is ‘paying heavily for its decision’.

Some Swedish scientists and academics have urged the country to adopt a tougher lockdown, with the death toll higher than in the rest of Scandinavia.

However, the WHO has suggested that Sweden could represent a ‘future model’ for a normal life after the lockdown.

Tegnell has championed Sweden’s policy as a long-term model because less drastic restrictions can be held in place for longer. 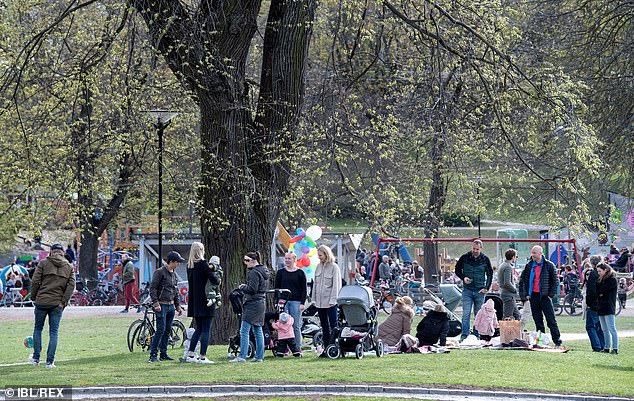 People sit outdoors and enjoy picnics in Stockholm last weekend, in a country which is relying on voluntary measures to slow the spread of coronavirus 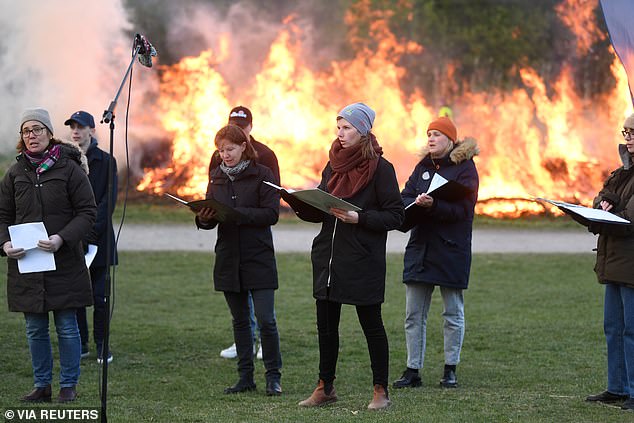 A choir and a bonfire at last night’s Walpurgis Night festivities in Stockholm, an activity which would be deemed non-essential and cancelled in much of Europe

The Swedish government cites a high level of trust in government agencies as a reason for its more relaxed policy.

Sweden’s trust in government was second in the European Union, behind only the Netherlands, in a survey published by the European Commission in 2017.

The survey showed 72 per cent of Swedes trusting their government, compared to the EU average of 40 per cent.

Prime minister Stefan Lofven defended the lack of a lockdown last week, saying he was ‘confident in the overall strategy’.

‘One reason that we have chosen this strategy, and where we have supported the agencies, is that all measures have to be sustainable over time,’ he said.

Sweden’s population-adjusted death toll is lower than in Britain, France and Spain, which have all imposed full-scale lockdowns since March.

The Scandinavian country’s population is also more spread out – more than half of homes are single-person households, easily the highest figure in the EU.

Regardless of domestic decisions, the global slump will batter Sweden’s economy, which the government expects to contract seven per cent this year.

JP Morgan has forecast that Sweden’s economy will shrink by less than the eurozone average, but still with a 13.7 per cent contraction in the current quarter.

That compares with a projected 17.3 per cent contraction for the euro area, 16.6 per cent for Germany and 21.4 per cent for France. 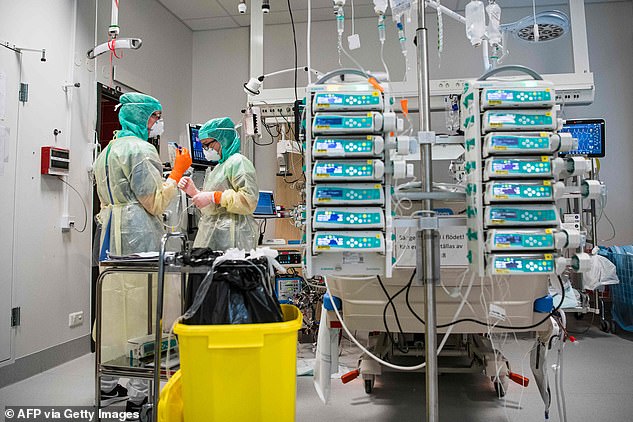 Nurses wearing protective gear and face masks take care of a coronavirus patient in an intensive care department in Solna, near Stockholm

‘The actions that the Swedish government has taken are good and it perhaps makes the performance of Sweden’s economy less bad than other economies,’ said Jens Henriksson, CEO of the country’s biggest mortgage lender Swedbank.

‘And that is good for the banking system.’

Statistics from rival SEB showed card transactions made through the bank fell by 28 per cent in Sweden in the week of April 6, much less than the 70 per cent in Finland and the 66 per cent in Denmark.

‘If we are to reach a ‘new normal’, in many ways Sweden represents a future model,’ said Mike Ryan, the WHO’s top emergencies expert.

But he also pointed to Swedes’ faith in authorities, adding: ‘What it has done differently is that it really, really has trusted its own communities to implement that physical distancing.’

Sweden could reap a longer-term benefit if ‘herd immunity’ is achieved faster there than elsewhere.

But this concept, where enough people have been infected to effectively stop the virus spreading, is untested for the new disease.

The Swedish health agency’s modelling suggests about 25 per cent of people in the Stockholm region have had or will contract the disease.

By contrast, in neighbouring Finland, health authorities have been concerned the coronavirus has spread too slowly, leaving the country well short of its peak.