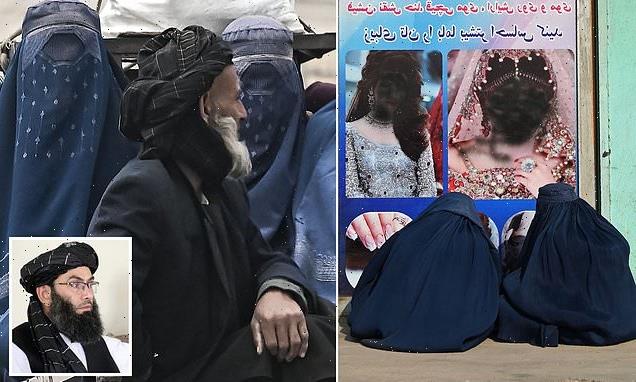 The Taliban have banned women from travelling distances longer than 45 miles unless accompanied by a male family member.

The Ministry for the Promotion of Virtue and Prevention of Vice today declared that women seeking to travel anything other than short distances should not be offered transport if they are alone, and insisted transport be offered only to those wearing Islamic hijabs.

‘Women travelling for more than 45 miles (72 kilometres) should not be offered a ride if they are not accompanied by a close family member,’ ministry spokesman Sadeq Akif Muhajir said, specifying that it must be a close male relative.

The ministry had also called on women TV journalists to wear hijabs while presenting. 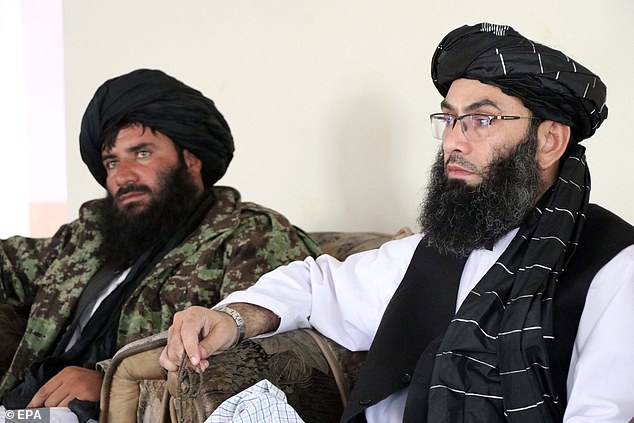 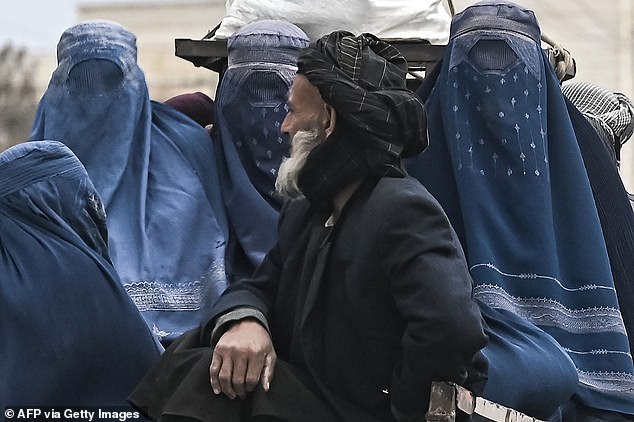 The Ministry for the Promotion of Virtue and Prevention of Vice today declared that women seeking to travel anything other than short distances should not be offered transport if they are alone, and insisted transport be offered only to those wearing Islamic hijabs. (Pictured: Afghan women ride on a vehicle along a road in Mazar-i-Sharif on December 21, 2021)

The Taliban’s interpretation of the hijab – which can range from a hair covering to a face veil or full-body covering – is unclear, and the majority of Afghan women already wear headscarves.

Since taking power in August, the Taliban have imposed various restrictions on women and girls, despite pledging a softer rule compared with their first stint in power in the 1990s.

In several provinces, local Taliban authorities have been persuaded to reopen schools – but many girls still remain cut off from secondary education.

Early this month, the Islamist group issued a decree in the name of their supreme leader instructing the government to enforce women’s rights.

The decree did not mention girls’ access to education. 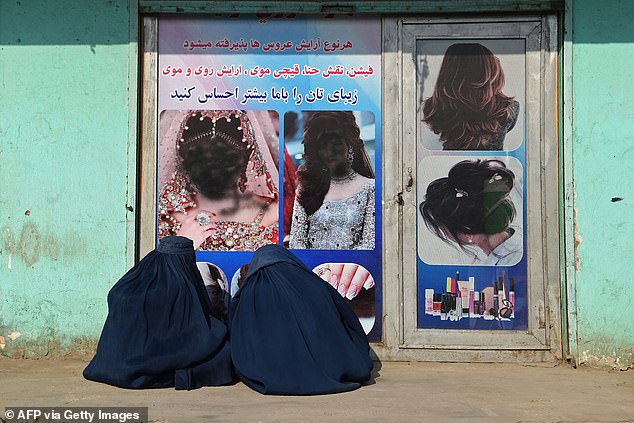 Afghan burqa-clad women sit in front of a beauty salon with images of women defaced using spray paint in Jalalabad on December 13, 2021. 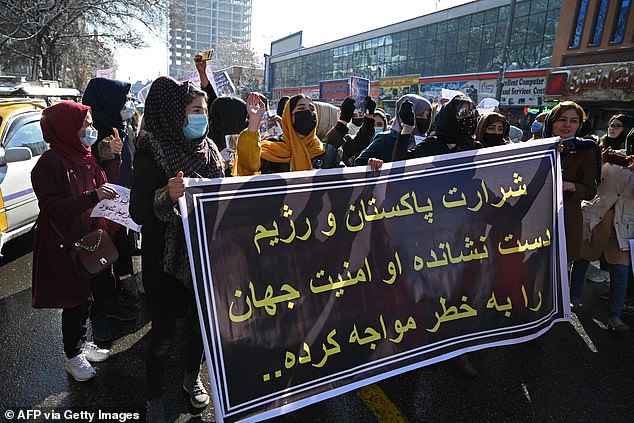 Afghan women take part in a protest at Shahr-e Naw in Kabul on December 16, 2021, demanding the right to education, jobs and political representation from the Taliban government.

Activists hope that the Taliban’s battle to gain international recognition and get aid flowing back into one of the poorest countries in the world will lead to them making concessions to women.

Respect for women’s rights has repeatedly been cited by key global donors as a condition for restoring aid.

Women’s rights were severely curtailed during the Taliban’s previous stint in power.

They were then forced to wear the all-covering burqa, only allowed to leave home with a male chaperone and banned from work and education.

The latest restrictions imposed by the Taliban come amid severe food shortages, with an ongoing drought and reduced aid packages causing a huge proportion of Afghanistan’s population to go without food. 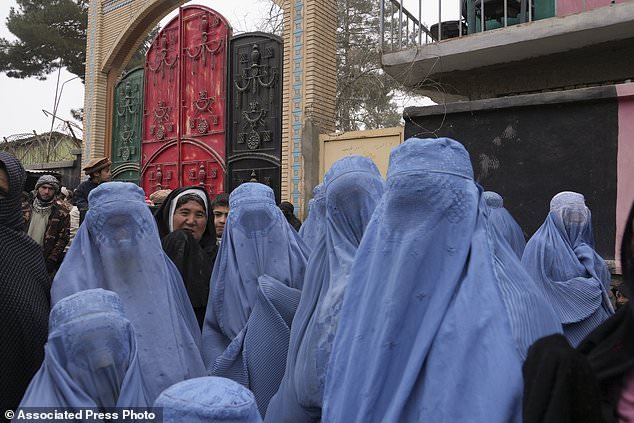 Hundreds of Afghans gather in front of the governors office to requests humanitarian aid, in Qala-e-Naw, Afghanistan, Tuesday, Dec. 14, 2021 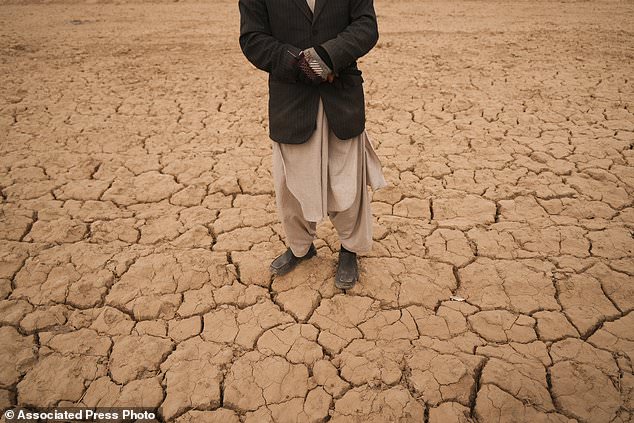 Severe drought has dramatically worsened the already desperate situation in Afghanistan forcing thousands of people to flee their homes and live in extreme poverty (pictured: farmer stands on a barren field, Dec 13, 2021)

Severe drought has affected more than 60% of the country´s provinces, ‘but there is no single province not affected since some are facing serious or moderate drought.’

‘If urgent measures are not taken, there will be a catastrophic humanitarian situation,’ he said.

‘It is arguably the worst humanitarian crisis in the world at the moment, and the saddest part is that early action and prompt action could have prevented it from escalating.’ 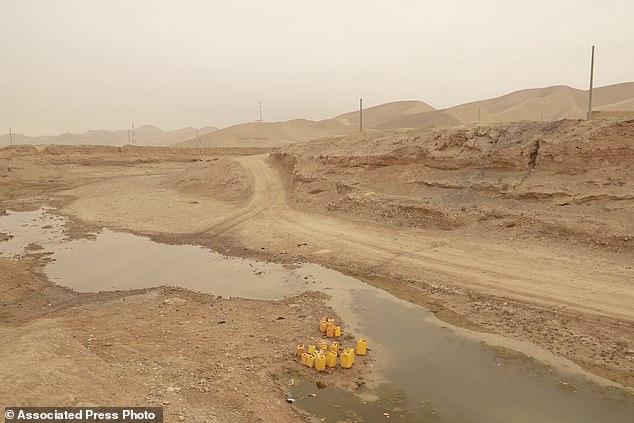 Oil canisters used to carry water stand in the middle of the riverbed of dried-out river, in Sang-e-Atash, Afghanistan, Monday, Dec. 13, 2021