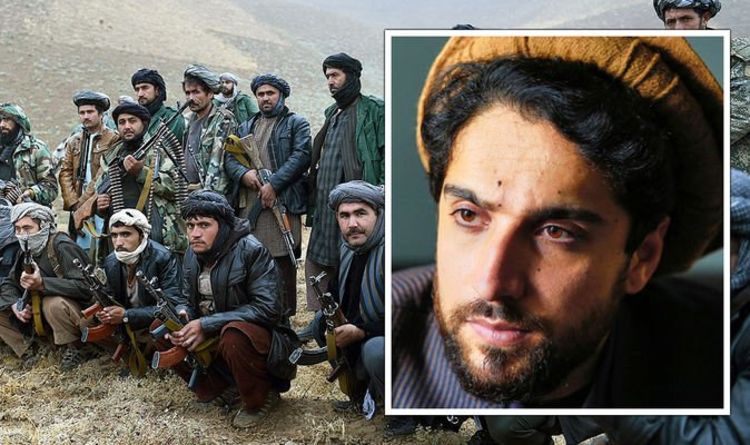 But Ahmad Massoud has offered a chilling warning that the country could nevertheless become a magnet for terrorists – and may offer al-Qaeda a base to launch terror attacks on the West, including the UK. Mr Massoud is the son of Ahmad Shah Massoud, the so-called “lion of Panjshir”, the former leader of the Northern Alliance, who was killed by al-Qaeda days before the September 11 attacks.

The title has now been passed down to Ahmad as he continues his father’s legacy in the beleaguered region.

The younger Massoud is heading up an armed uprising centred on Panjshir, which has resulted in the recapturing of three key areas in recent days – and the 32-year-old has vowed his army of rebels will “fight to the last breath”.

One insider told the Mirror: “Over the past three days, remnants of the Afghan National Defence and Security Force made their way to Panjshir.

“They are bolstering, joining and supporting Massoud’s alliance.

“The Taliban are being attacked on several fronts in multiple assaults but they will send reinforcements north to fight back.”

Prior to his death, Ahmad Shah Massoud led CIA-backed Northern Alliance, which eventually toppled the Taliban in 2002.

In a letter to the Washington Post, his son said: “I write from the Panjshir Valley today, ready to follow in my father’s footsteps, with mujahideen fighters who are prepared to once again take on the Taliban.”

He and his men had stores of ammunition and arms which they had collected over the years, fearing the day would one day come when they found themselves forced to fight, he explained.

He added: “We also have the weapons carried by the Afghans who, over the past 72 hours, have responded to my appeal to join the resistance in Panjshir.

“We have soldiers from the Afghan regular army who were disgusted by the surrender of their commanders and are now making their way to the hills of Panjshir with their equipment.

“Former members of the Afghan Special Forces have also joined our struggle.”

He said: “The flag of the National Resistance Front will fly over every position that they attempt to take, as the National United Front flag flew 20 years ago.

“Yet we know that our military forces and logistics will not be sufficient.

“They will be rapidly depleted unless our friends in the West can find a way to supply us without delay.”

In a message clearly aimed at western leaders such as US President Joe Biden and UK Prime Minister Boris Johnson, Mr Massoud warned: “The Taliban is not a problem for the Afghan people alone.

“Plots against democracies will be hatched here once again.”

He stressed: “No matter what happens, my mujahideen fighters and I will defend Panjshir as the last bastion of Afghan freedom. Our morale is intact. We know from experience what awaits us.

“But we need more weapons, more ammunition and more supplies.”

Mr Massoud has a degree from King’s College London and also attended Royal Military Academy Sandhurst for a year.