Tasmanian Premier Peter Gutwein says he was the victim of childhood sexual assault at the hands of a schoolteacher.

Speaking at a COVID-19 briefing on Friday, Mr Gutwein said he had “great empathy” for survivors of sex abuse because he was sexually assaulted when he was 16.

The Premier was replying to a question about complaints from a sexual assault survivor after Liberal members of Tasmania’s Parliament were heard groaning following a question about the upcoming commission of inquiry into the government’s response to institutional child sex abuse.

Mr Gutwein said he was invited to the home of a teacher he had known “for a long time”, under the pretence of having a beer before he began his final years of secondary education.

He said while he was at the house, the teacher placed an arm around him and “grabbed for my groin and they tried to get their hand down my pants”.

“I was big enough and strong enough to get them off me and to get away,” Mr Gutwein said. 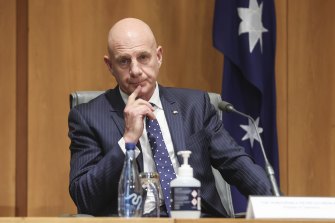 Mr Gutwein said this was the only time he planned to speak about the assault and the reasons why he voted in favour of a Tasmania Greens bill proposing an inquiry into child abuse.

“I haven’t spoken to anyone about the motivations behind why I crossed the floor in 2003, and why I feel so passionate about having this commission of inquiry – once and for all getting to the bottom of these matters – but they are very personal,” he said.

Responding to a question about whether party members would be disciplined for the groans heard in parliament, Mr Gutwein said he had requested to speak to the sex abuse survivor who made the complaint because he knew what the “loss of trust” feels like.

However, he said if he truly believed members of his party wanted to “maliciously damage or hurt” a survivor through their actions during question time, he would have “dragged them into parliament myself yesterday and forced them to respond”.

“I provided an apology without excuse or explanation and I must say, last night, this really troubled me,” he said.

“In terms of the person yesterday that took offence, I hope that she will provide me with her phone number so that I can have a conversation with her because I’ve walked in her shoes.

“To have a victim survivor that felt that this government wasn’t being supportive … It’s one of the first nights that I’ve lost sleep for a long period of time.”