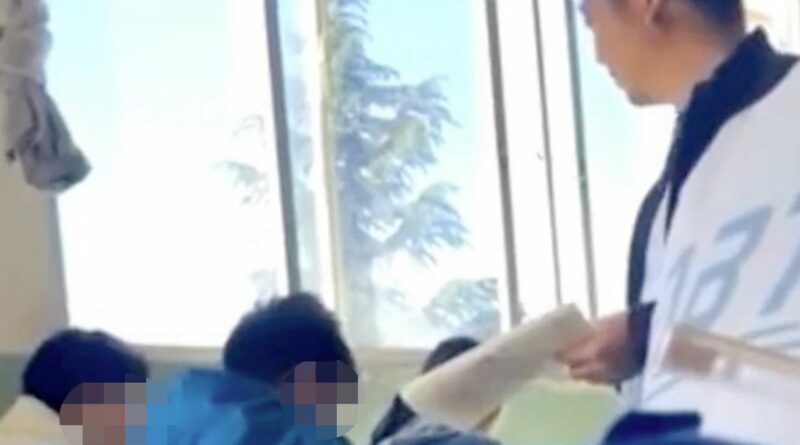 A teacher has been placed on administrative leave after he was filmed violently beating a student who allegedly dozed off during class.

The high school student, who has only been identified by the surname Liu, was taken to a hospital for body check in Zhaotong city of Yunnan province, southwestern China.

grabbed by the hair and banged on the table repeatedly before the teacher dragged him out to the front of the classroom.

He then drags the boy out of the chair and forces him to stand at the front of the classroom while other students watch in terror.

Mr Ma pushes the student onto the floor and stamps on his back. The video, which was filmed on May 10, was confirmed by Ludian County government after an investigation at Ludian County No.2 Secondary School.

The official released a statement, stating: "The video of a school teacher beating students in Zhaotong, Yunnan province, has gone viral on the internet.

"The video reflects the content is true, on May 10, 2022 occurred in the second secondary school in Ludian County.

"After the incident, Ludian County Bureau of Education and Sports quickly sent the student, surnamed Liu, to the county people's hospital for a full-body physical examination. "No injuries have been reported in the initial checkup, the student has been sent to school for classes."

The student later told the Chinese media: "After seeing me dozing off, the teacher came over and hit me.

"Our other teachers usually tell a sleeping student to stand up and listen to the lesson, but our headteacher was rather grumpy."

Viewers were horrified and said the teacher should be sacked for physical punishment.

One said: "I wouldn't feel safe to send my children to a school where teachers use violence to educate youngsters."

"Poor boy, I can't imagine the trauma he's had," a second wrote and a third added: "This is disgusting, they should sack the teacher. As a mum of two, it's too painful to watch this."