Home » World News » Teen missing after her flight lands at DIA and police ask public’s help in locating her. 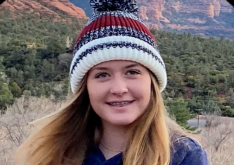 Denver police are asking for the public’s help in finding a Colorado teenager who is missing after traveling to Arizona for a Christmas break.

Whitney Lulloff, 16, arrived at Denver International Airport on Monday but “mysteriously disappeared,” according to KDVR Channel 31.

Denver police were notified by Lulloff’s family on Monday about her being missing, said Jay Casillas, a department spokesman.

“There’s reason to believe she’s here (in Denver),” Casillas said. “We are trying to track her down anyway possible.”

Investigators do not believe that Whitney is in imminent danger, Casillas said.