He sees you when you’re sleeping…! Terrifying 19th Century depictions of Santa Claus show how Father Christmas was not always a jolly man in red

These are the startling images of nineteenth-century portrayals of Santa Claus as bedraggled, hunchbacked and with strange characters.

Santa Claus was not always depicted as the portly, jolly, red-cheeked figure with a belt-busting gut beloved around the world today.

A stick-thin, pious and sometimes terrifying man with a walking stick, the fascinating images show what Father Christmas looked like in the nineteenth century – before he became the cuddly, bearded man marketed to modern-day consumers. 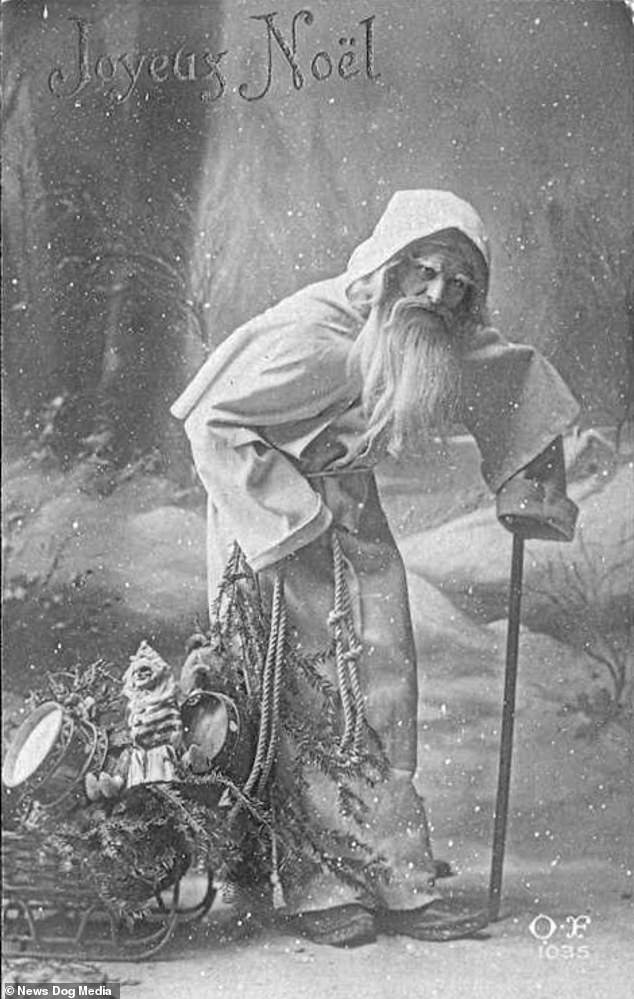 You better watch out: A strange image of Santa Claus showing him skinny and haggard with a bent back, from 1897 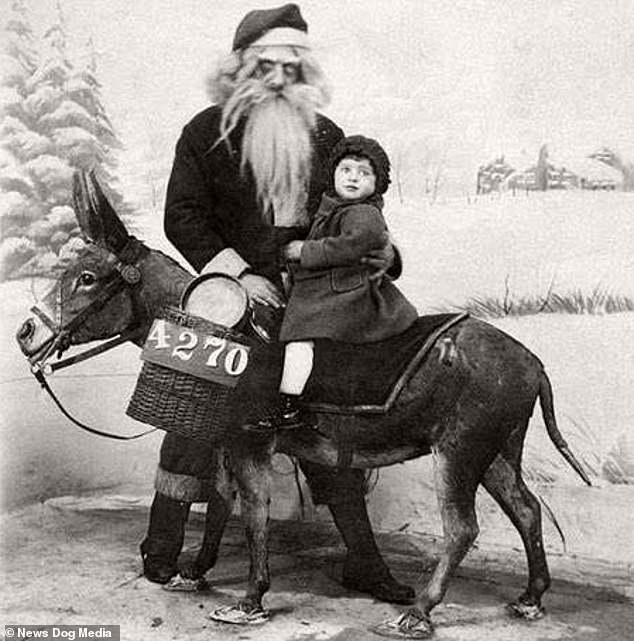 You better not cry: A creepy looking Santa Claus holds a child sitting on a model donkey; the image of Santa as a portly, ruddy-faced, jolly character was not developed until the 1920s 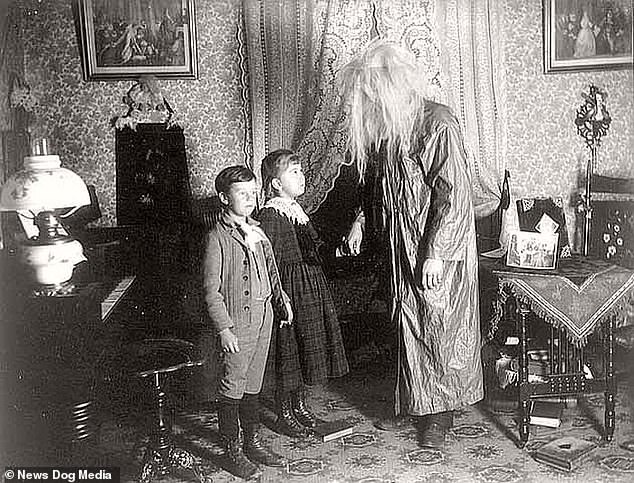 You better not pout: A little boy looks like he is frozen with fear as Santa Claus, whose face is covered completely by his white hair, stands in his house 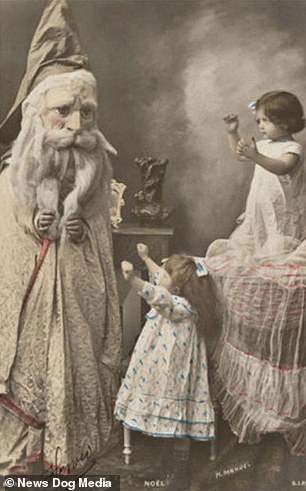 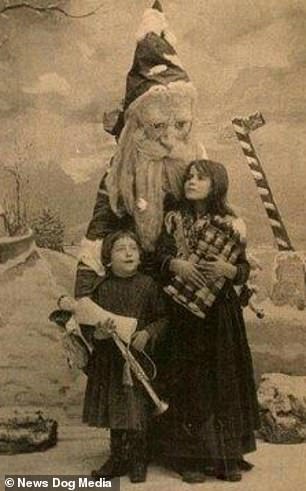 I’m telling you why: These spooky image show a large Santa Claus in a mask, totally dead behind the eyes as he stands alongside children 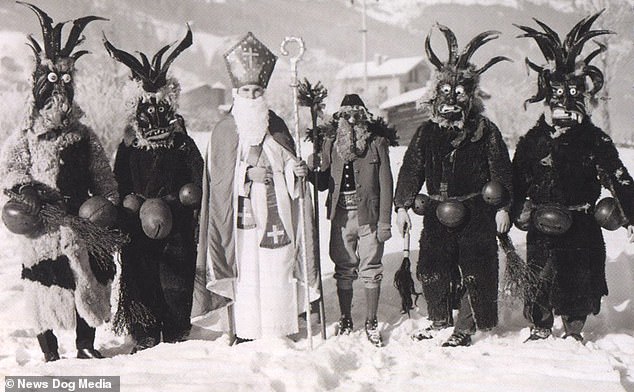 Santa Claus is coming to town: This early 20th century photograph shows St. Nicholas and his Krampus friends who were used to frighten naughty children

The black-and-white photographs – that date as far back as the 1880s – show Santa as a scrawny, episcopal-robed man with no reindeer-powered sleigh in sight.

Instead, Saint Nick has developed a hunchback from dragging around presents.

Other nineteenth-century representations of Santa are far more terrifying.

Some 1880s images depict a grotesque old man with a large mask – whilst some 1890s pictures represent Father Christmas as a spooky, ghostly apparition.

Meanwhile some early twentieth-century European images show Saint Nick accompanied by a gruesome creature known as Krampus – a devil-like character who beats badly-behaved children and drags them back to Hell. 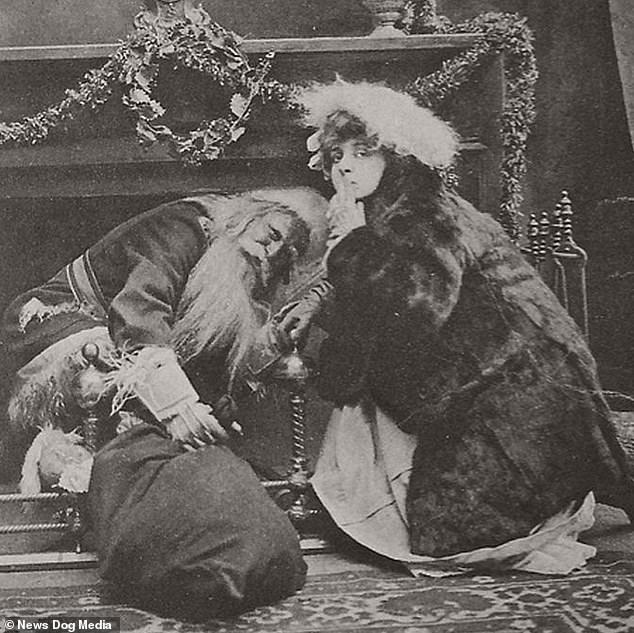 He’s making a list: A bedraggled version of Santa Claus crawls into the chimney in this image from the early 1900s 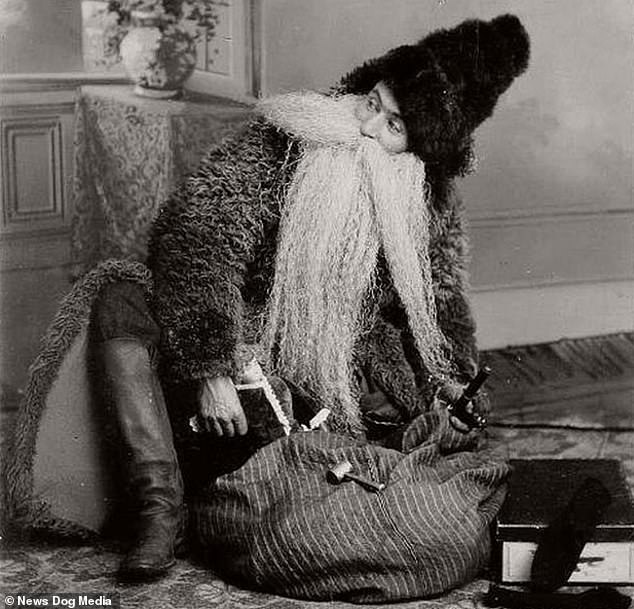 He’s checking it twice: This unusual image has Santa in a furry coat and black hat as he rummages through his gifts in Iowa 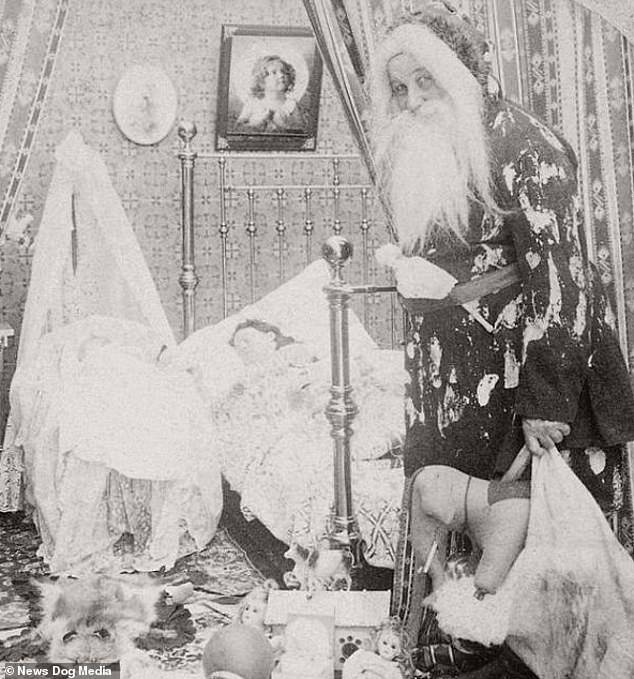 He’s gonna find out who’s naughty or nice: This Santa Claus, photographed in the late 19th century, shows him bringing toys as children sleep, but he appears to be covered in paint 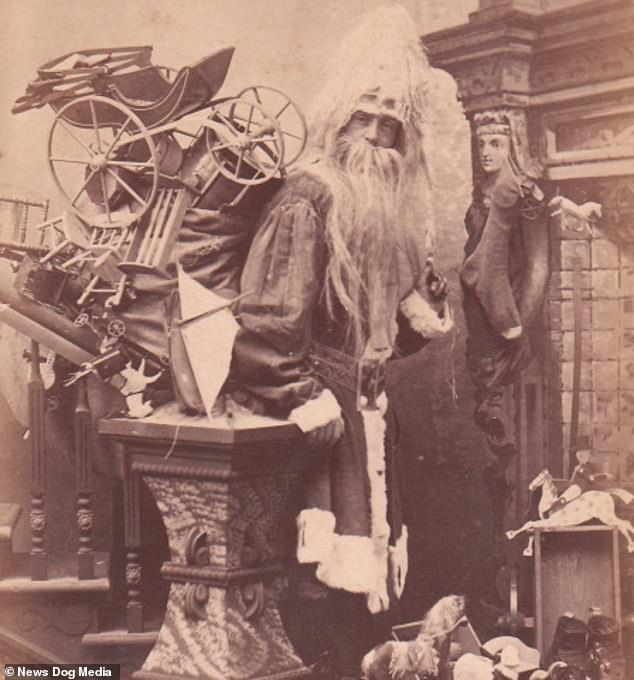 Santa Claus is coming to town: Santa looks far less polished than his modern counterpart in this picture with a pile of disorganised toys taken in Boston, Massachusetts in 1880

It was only in the 1920s that our modern vision of Santa as a plump and jolly man was created – and this was mainly down to Coca-Cola’s holiday advertising.

Coca-Cola wanted to move away from the traditional thin, intellectual, strict looking Santa of the late nineteenth and early twentieth century.

For their festive commercial, the brand wanted to project a more lovable, fat Santa with a taste for cookies, milk and of course Coca-Cola bottles.

Afterwards, many other brands and television programmes in the twentieth century continued fuelling this modern depiction of Santa.

Father Christmas dates back as far as the sixteenth century in England however it was during the Victorian period that Christmas customs enjoyed a significant revival including the figure of Santa. 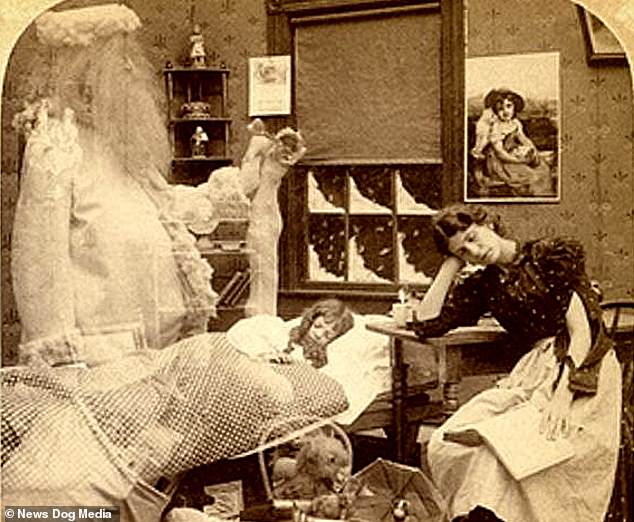 He sees you when you’re sleeping: Another ghostly Santa stands over a sleeping girl and her mother in this American image titled ‘A Dream of Christmas’ from 1897 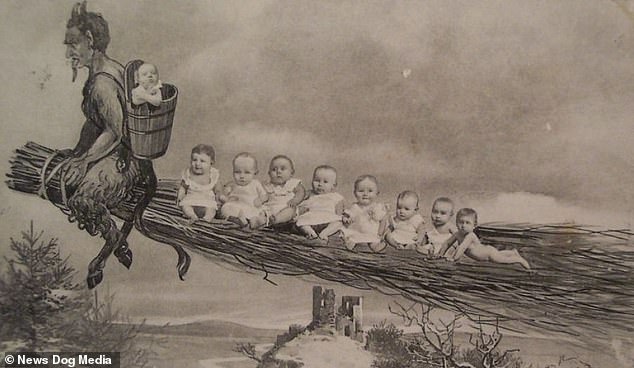 He knows when you’re awake: Some images of Santa were accompanied by Krampus (above) – a demonic creature who beats badly-behaved children and drags them back to Hell. 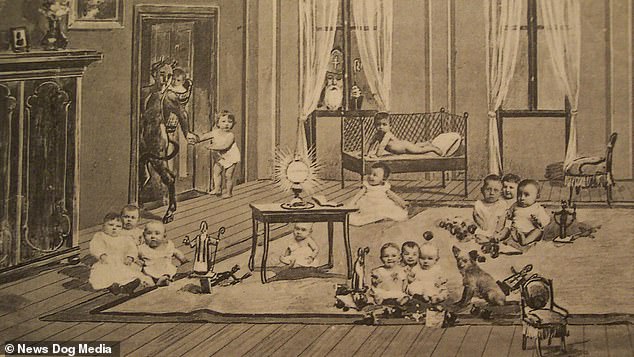 He knows if you’ve been bad or good: An image of a Krampus from 1902; according to folklore he would visit children during the Christmas period and punish those who had misbehaved 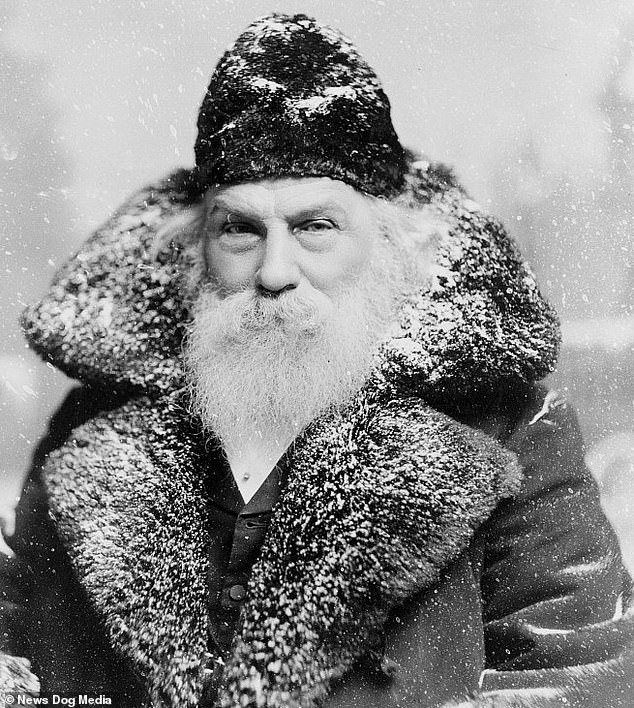 So be good for goodness sake: Santa in 1895 looks friendlier than some of the others but his clothes do not match up with our modern representations

Father Christmas’s physical appearance in the nineteenth century was changeable. While the signature white beard was always present, Santa was variously portrayed as hunch-backed, svelte, haggard and even frightening.

Loosely based on the patron saint of children, St Nicholas, Santa Claus was also represented as a strict, pious figure clothed in bishops’ red and white robes.

This was later replaced by a fur-trimmed suit in the early 1900s.