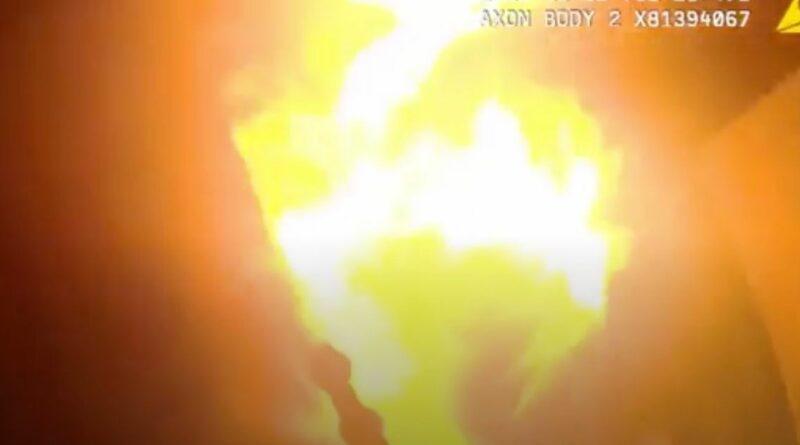 This is the terrifying moment police officers are doused in petrol while arresting a man who set his flat on fire.

Christian Smith, of Farnworth, Bolton, was jailed for three and a half years after being charged with one count of arson with intent to endanger life.

Greater Manchester Police shared footage of the arrest on September 9 to honour the officers who attended the scene in December 11, last year, according to Manchester Evening News.

Footage shows one officer shouting "petrol, he's tipping it out the window" when he makes his way to the flat where Smith was in.

During the short encounter, Smith splashes the fuel into the eye of one officer, who later needs treatment at Bolton Royal Hospital.

“Get back!”, one officer says, before adding, “We need to back off.”

The team retreat back onto the street and gear themselves with protective equipment like riot shields and helmets and return to the property.

While attempting to enter the flat, Smith throws the petrol over the negotiators as well as himself and sets fire to the doorway.

The flames erupt from inside the building and quickly spread around.

“Stop, fire!”, one officer shouts as they begin to withdraw from the scene. "Fire — back, back, back!"

Luckily the flame was extinguished soon after by Greater Manchester Fire and Rescue firefighters.

Earlier this month at Bolton Crown Court, Judge Graeme Smith heard the police were called following complaints from his estranged partner and mother of his two young children, and their school.

He said: "You were consumed with the belief that was a racist and that you were being targeted by the police and this had led to further convictions.

"The tragedy in all this is that acting the way you did you have made it more difficult to see them and you clearly became obsessed and acted out of character on that occasion."