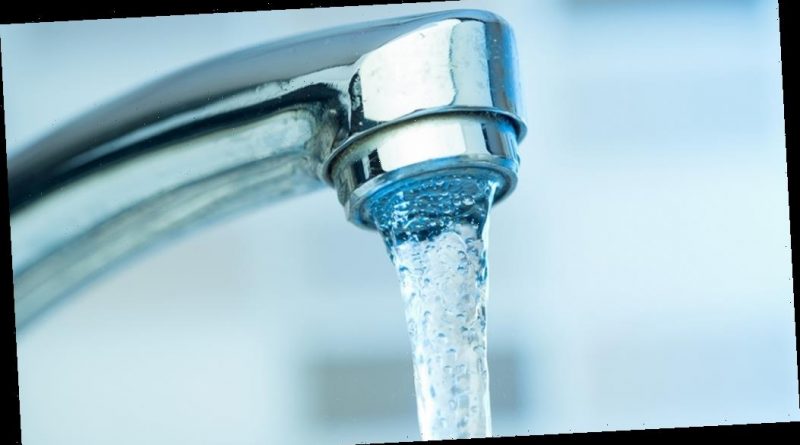 Who or what is to blame for the Texas power crisis?

The eyes of Texas turned to an emerging water crisis Thursday evening after electrical power had been restored to nearly 2 million homes — though hundreds of thousands of residents remained in the dark.

About 13 million Texans — or nearly half the state’s approximately 29 million residents — were under an advisory to boil drinking water, according to reports.

“We need to make sure we use every tool possible to get water restored to our fellow Texans,” Abbott said, according to the station.

“We need to make sure we use every tool possible to get water restored to our fellow Texans.”

Biden approved an emergency declaration for Texas along with Oklahoma and Louisiana that will move resources, supplies and equipment to the states, the Washington Post reported.

FEMA (Federal Emergency Management Agency) would be sending 729,000 liters of water to the state and some of the power generators it planned to supply would be sent to water treatment plants, the report said.

The effects of a brutal winter storm that slammed the Lone Star State this week showed no signs of letting up. The storm caused a massive power grid failure as officials were forced to cut power to stabilize the grid.

The storm has left more than two dozen people dead across the state.

A Houston-area family died earlier this week from carbon monoxide as their car idled in their garage. A woman and her three grandchildren were killed in a fire that authorities said might have been caused by a fireplace they were using. 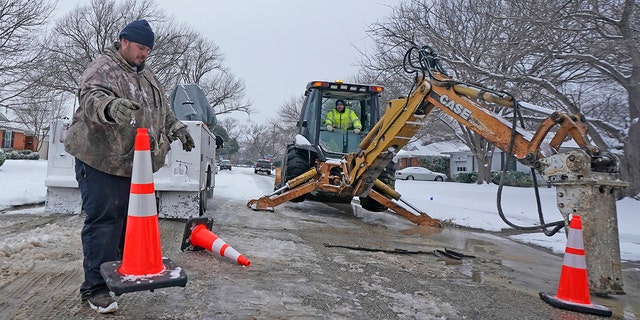 Workers in Richardson, Texas, prepare to work on a water main pipe that burst due to extreme cold in a neighborhood Wednesday, Feb. 17, 2021. (Associated Press)

Electric Reliability Council of Texas (ERCOT) officials, which operates the power grid that covers most of the state, said it has made “significant progress” in getting power turned back on and the remaining blackouts are likely from damage to distribution systems caused by the ice storm and others need to be restored manually, the Texas Tribune reported.

ERCOT officials said Thursday the grid was “seconds and minutes” away from a catastrophic, uncontrolled failure that could have left residents without power for months, according to the Tribune. 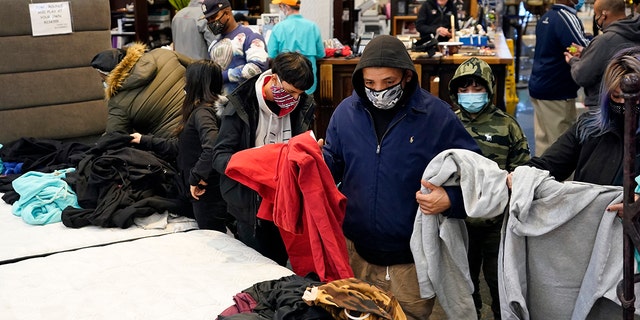 People select shirts and sweatshirts being given away at a Gallery Furniture store after the owner opened his business as a shelter for those without power at their homes in Houston, Feb. 16, 2021. ​​​​​​(Associated Press)

“It needed to be addressed immediately,” Bill Magness, president of ERCOT, said of the rolling blackouts that have lasted days rather than hours. “It was seconds and minutes [from possible failure] given the amount of generation that was coming off the system.”

He added if ERCOT had waited to cut the power “then what happens in that next minute might be that three more [power generation] units come offline, and then you’re sunk.”

If the grid had completely gone down it could have taken months to repair, The Tribune reported.

“The operators who took those actions to prevent a catastrophic blackout and much worse damage to our system, that was, I would say, the most difficult decision that had to be made throughout this whole event,” Magness said. 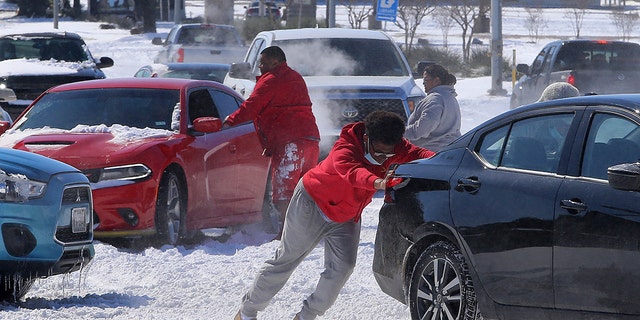 People push a car free after spinning out in the snow Monday, Feb. 15, 2021 in Waco, Texas. (Associated Press)

“If any residence doesn’t have power,” the governor wrote, “it is due to downed power lines or the need for the power company to manually reconnect.”

But the state’s water supply was a different story. Water pressure fell after lines froze, and many people left faucets dripping to prevent pipes from icing over. Abbott urged residents to shut off water to their homes, if possible, to prevent more busted pipes and preserve pressure in municipal systems.

Houston Mayor Sylvester Turner said he expects that residents will have to boil tap water before drinking it until Sunday or Monday.

In Austin, “tens of thousands” of leaks in the water system, as well as burst pipes inside homes, were hurting that city’s water supply, city Water Director Greg Meszaros told the Austin American-Statesman.

Austin saw 325 million gallons of water leak out of its system between Tuesday night and Wednesday morning, the report said.

“That is an incredible amount of water,” Meszaros told the newspaper.

Two of Houston Methodist’s community hospitals had no running water but still treated patients, with most non-emergency surgeries and procedures canceled for Thursday and possibly Friday, and burst pipes were repaired as they happened, said spokeswoman Gale Smith.