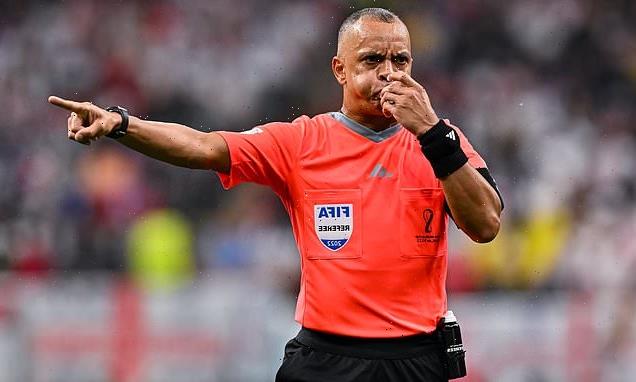 The Brazilian referee facing wrath of England fans: Hapless Wilton Sampaio, 40, who joined Fifa’s ‘elite list’ in 2013 and was part of VAR team in last World Cup, also sparked penalty controversy in group stages – and was criticised by Messi in qualifiers

The controversial referee at the centre of England’s World Cup heartbreak has been criticised before for questionable decisions – even attracting the ire of Lionel Messi.

Brazilian referee Wilton Sampaio, 40, was widely panned for his officiating during the Three Lions’ 2-1 defeat to France.

He failed to give England a penalty when Dayot Upamecano fouled Harry Kane and did not award Bukayo Saka a free-kick after a foul by Upamecano in the build-up to Aurelien Tchouameni’s opener.

Earlier in the tournament during the Saudi Arabia vs Poland match he was accused of giving a soft penalty and kept defender Matty Cash on when he faced a second yellow card. 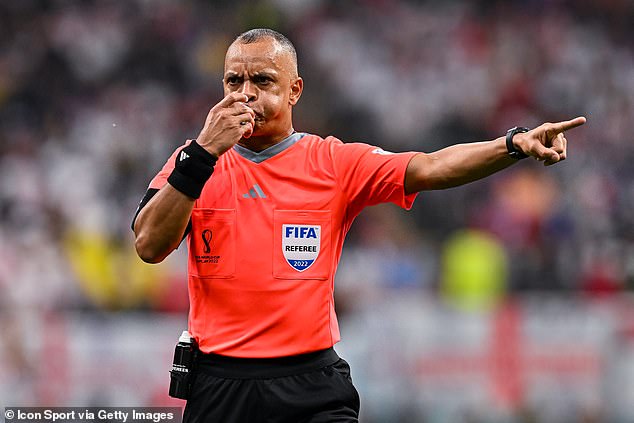 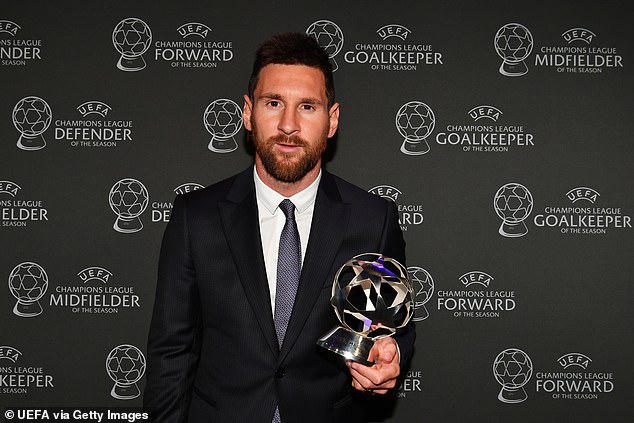 Lionel Messi is no fan of his either and has previously said ‘The referee always does this when he referees us, as if he does it on purpose’

Lionel Messi also slated him after Argentina’s 1-0 win over Peru in the World Cup qualifiers.

He took to Instagram to fume: ‘Difficult match, difficult to play. A lot of wind, they were playing deep, leaving little space for us.

‘The referee always does this when he referees us, as if he does it on purpose.

‘But well, 3 important points and we’re close to our objective.’ 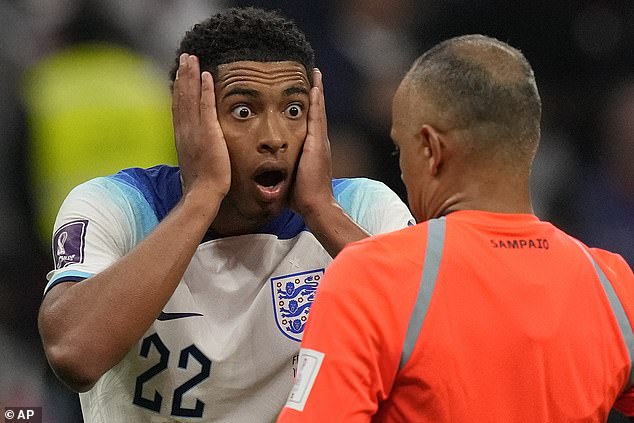 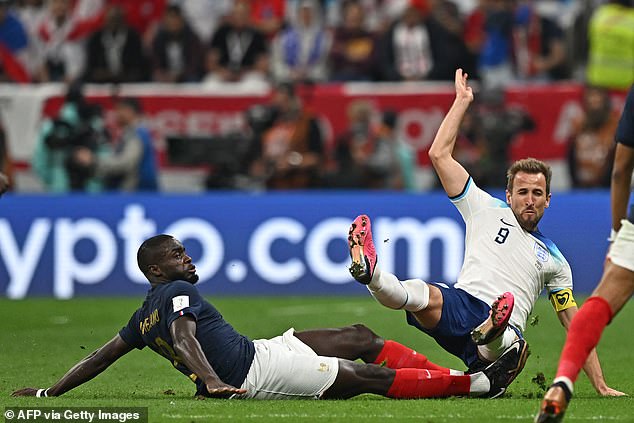 England fans also rounded on him and at one point changed his Wikipedia profile to suggest that he was blind.

Kane and his Three Lions team-mates reacted well after falling behind to Aurelien Tchouameni’s long-range strike, responding by pinning France’s defence back and creating a number of openings.

During that bright spell, the England captain picked up the ball on the right and got goal side of Upamecano before being brought down by the Bayern Munich star.

There was a short delay as Wilton Sampaio waited to be advised by VAR on whether he should go to the monitor to review his initial decision. However, shortly after the referee waved play on to the bemusement of supporters in Qatar and at home.

It was just one of a number of challenges during the game which were not given, including the one in the build-up to France’s opener. 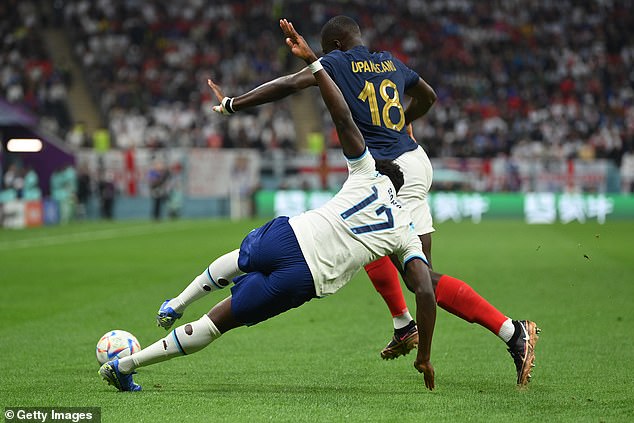 The 21-year-old received the ball on the edge won the ball in the French penalty area, before Upamecano came through on the young winger from behind forcing him to the floor.

France subsequently countered on England, attacking with pace and catching Gareth Southgate’s side off-guard, with Aurelien Tchouameni striking a long-range effort past Jordan Pickford to break the deadlock.

Gary Neville said after the game: ‘The referee I thought he had an absolute nightmare. He’s a joke of a referee, him.’

‘People will say it’s excuse, but he was just bad.’

The referee did give England two penalties during the game, the first when Saka was clumsily fouled by Tchouameni – which Kane converted.

England’s second penalty was after Theo Hernandez barged into the back of Mason Mount – a decision which was not originally given.

After being told by VAR to check out the incident, Sampaio had no other choice but to award the penalty. 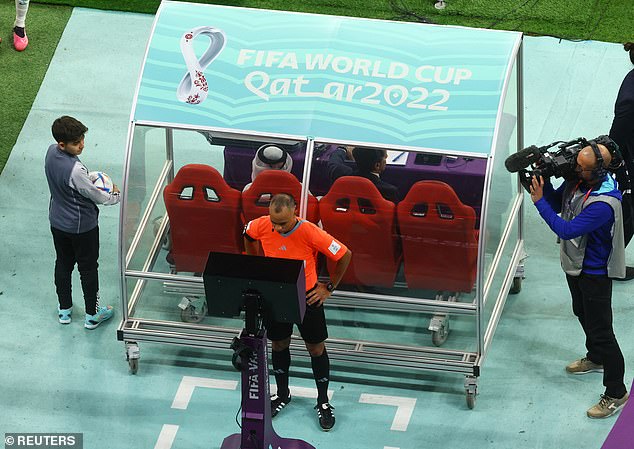 Unfortunately for England, Kane skied his penalty over the crossbar.

Sampaio had previously attracted criticism for awarding Saudi Arabia a controversial penalty against Poland earlier in the tournament.

He used the pitchside monitor to penalise a challenge by Poland’s Krystian Bielik on Saudi forward Saleh Al-Shehri, despite minimal contact shown on the replays.

He was also criticised by pundits in Saudi Arabia for failing to give Matty Cash a second yellow card after giving him an early booking in the 16th minute of the match, with Poland going onto win 2-0 on their way to the knockout stages. 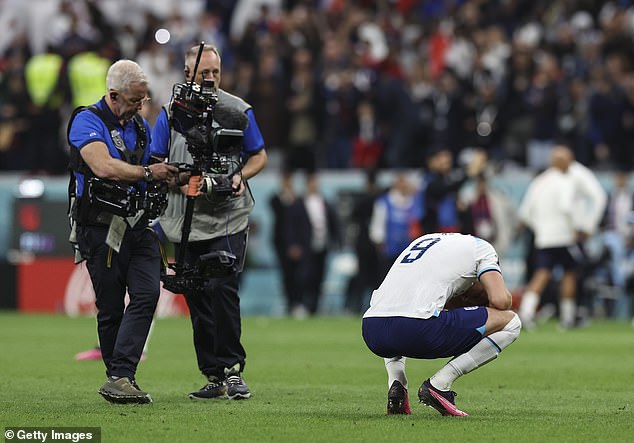 He’s known as a tough disciplinarian who dishes out yellow cards at every possible occasion, handing out 105 bookings and four red cards in just 21 games in Brazil’s top league.

Before the match, as reported by the Telegraph, Sampaio had refereed 381 games in his career, giving out 1,856 yellow cards and 102 red cards. He has also awarded 114 penalty kicks.

At the last World Cup in Russia, he was part of the refereeing team that helped introduce VAR to the tournament.

His two other games at the 2022 tournament were both victories for Holland – against Senegal and the United States.