The British ‘booze cruise’ is back! Nervous shoppers dash over to France to stock up on cut-price wine with just three weeks left until Brexit

The British ‘booze cruise’ is back.

With just 23 days to go until Brexit, nervous shoppers are dashing across the Channel to stock up on cut-price French wines.

Businesses based in Calais say their sales have shot up by as much as half in the past month as bargain-hunters seek savings of £3 per bottle on average. Author Giles Milton is pictured shopping for alcohol in a French supermarket in Boulogne in 2004. The ‘booze cruise’ phenomenon first took off in the 1990s

It comes after figures revealed one in 10 shoppers also claimed to be stockpiling supplies of food in case the UK leaves the European Union without a deal.

Majestic Wine, a UK-based chain which has two shops in Calais, said the rush to stock up on drink was down to ‘growing uncertainty over our future relationship with the Continent’.

Savvy shoppers who load up their car with the cheaper wines, beers and ciders on offer in northern France can save as much as £1,200, the firm claims.

Majestic said it even pays for shoppers to make the channel crossing if they pre-order their wines. 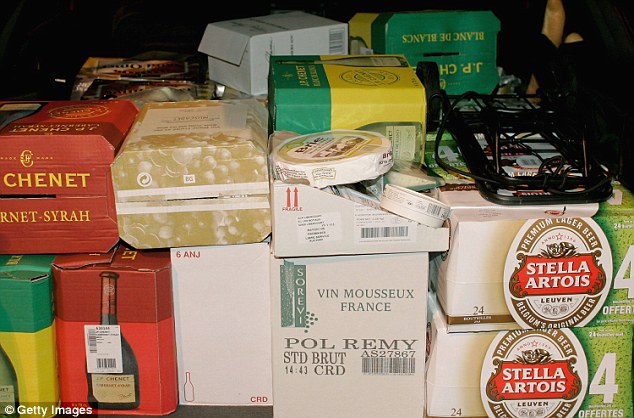 A car boot filled with wine, beer and cheese at the Calais ferry port to return to Dover in 2006

‘It’s not necessarily people buying as much as they can, as cheaply as they can.

‘These are wine lovers spending the same as they would in the UK, and getting considerably better bottles for it.’

Majestic said sales at its Calais shops have surged 49 per cent in the past month, the best performance ever outside of the busy Christmas period.

The ‘booze cruise’ phenomenon first took off in the 1990s, when British families would make the journey to Calais to snap up bargains or stop on the way back from their holidays.

Even supermarket giants Tesco and Sainsbury’s got in on the act, opening branches on the other side of the channel – including this one in Calais, pictured in 2004

It saw cavernous warehouses stacked high with cases of wine – with some bottles as cheap as £1 – spring up across the port city.

Even supermarket giants Tesco and Sainsbury’s got in on the act, opening branches on the other side of the channel, but the craze faded when they started selling cheap alcohol from their UK stores and the pound lost its strength against the euro.

However, in the booze cruise’s heyday, some French stores relied on British shoppers for as much as 95pc of their custom.

One of the most famous stores was the Eastenders cash and carry, run by former London market trader Dave West, dubbed ‘king of the booze cruise’.

The entrepreneur, known for his bright pink suits, later sold off his drinks empire and ran the Hey Jo nightclub in Mayfair. He died in 2014 after being stabbed by his son, David West Jr, following a drunken argument.