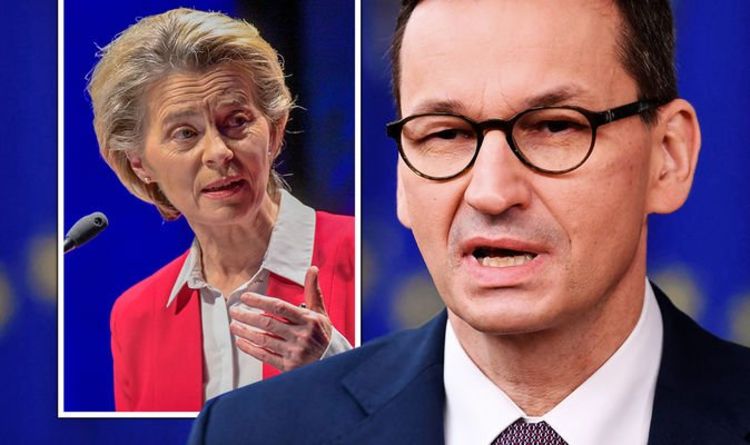 Speaking with German publication Phoenix, the European People’s Party MEP gave a stern warning. She said: “I think the danger is real – not because someone would actually demand it, or because it would be part of the communication strategy of the Polish government… But in the end, if we are not careful, it will amount to a factual exit.”

Speaking of the split opinions on the possibility by Polish citizens, the MEP said: “I am relying very much on the fact that the Polish people, who have shown where they stand in the last few weeks with very large, numerous pro-European demonstrations, will take a little more responsibility into their hands and will put pressure on their own government.”

Commenting on how critical the potential outcome could become as the European Union transits through a time of crisis since Brexit, the MEP stated time was of the essence.

She said: “These are crucial hours and days here on a European level.”

Sentiment towards the European Union by the Polish government is at an all-time low.

Polish Prime Minister Mateusz Morawiecki was highly critical of the supranational powers the EU holds over its member.

He questioned the ability of the European Court of Justice to exceed national laws, which he claims breached the Polish Constitution.

The European Union’s Court of Justice ruled that Poland would have to pay a €1million fine every day because of controversial judicial reforms the EU says are illegal.

This financial penalty is believed to be the highest ever imposed on an EU member state and is just the latest flashpoint in the escalating tensions between the European bloc and Poland.

Speaking of the impact of the financial penalties, Ms Dupont was concerned it had come to this.

She said: “It’s a shame it had to get to imposing fines, but it’s the last resort that we have on hand before the big guns are brought out.”

Poland however has vowed not to pay a cent to Brussels.

“The [ruling Law and Justice party] PiS is an expert in wasting Poland’s money,” said Kamila Gasiuk-Pihowicz of the opposition Civic Platform.

“Not only are they destroying the independence of the judiciary, but doing so at the Poles’ expense,” she continued.

He said Poland “cannot and should not pay a single zloty for the illegal sanctions against Turow” or for the “changes to the judiciary.”

“Only the weak give in to pressure. Let us do our job, let us reform the justice system and take care of the rule of law in the European Union,’ he said.

“Let us also take care of the standards of the European Union, which require that the law be the same everywhere and enforced in the same way,” he concluded.

The Commission has withheld approval of Poland’s pandemic recovery funds over the long-running disagreements, which escalated earlier this month when the Polish Constitutional Tribunal found certain tenets of EU law incompatible with the country’s constitution.

Many in Brussels saw the ruling as challenging the EU’s basic legal framework.

“I think it is doable, I hope that we’ll reach an agreement, but the reform is condition sine qua non,” [without which there is nothing”] Ursula von der Leyen said at a press conference in Brussels.