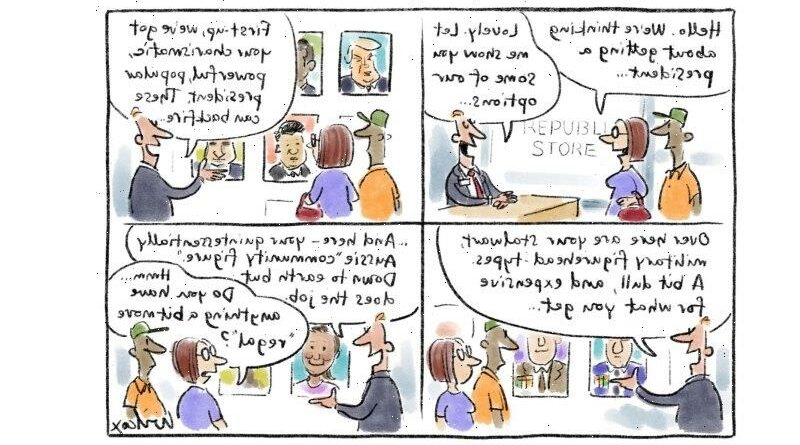 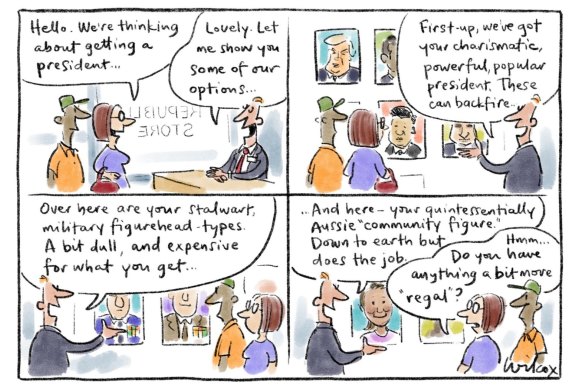 THE REPUBLIC OF AUSTRALIA

The latest census shows it’s time we grew up as a nation
If you select a gear before you start a car the car won’t start. John Howard used that truism to stop any advance towards a republic when he worded his 1999 referendum. If the nation embarks on a future referendum, it can be assumed that the politicians working on its wording will be far more honest than was Howard.

The 2021 census revealed that only 33 per cent of Australians have British ancestry, so we can no longer claim to be a British country. We are an Australian one. It is time we grew up as a nation and worked out the best way to move forward into our future and to overcome the fear of that future just as most other former British colonies have, and more plan to do. The Queen is dead. It’s time we moved on.
Gary Sayer, Warrnambool

We already have our independence
David Crowe shrewdly alluded to the difficulty the prime minister has in managing the civil narrative after the Queen’s death (“Bridge too far? Why PM is tetchy”, Comment, 16/9). Anthony Albanese has, however, acted in a very measured manner in not suddenly advancing the republican cause, unlike other less-inhibited MPs.

The endearing attraction of our constitutional monarchy is that it is primarily about the institution, not the individual. The Crown keeps total power and authority from being exercised in an absolute sense by precarious politicians.

It is also a bulwark against social anarchy. How extraordinary that the United Kingdom can effectively change both the prime minister and sovereign within a week without street riots or insurrection.

The semantic confusion concerning independence and an Australian head of state also requires clarity. We achieved independence in 1901, and today any Australian man or woman can rise to be our governor-general, our executive head of state. Republicans of all ilk must simply grasp that while it is always easy to get rid of good things, it is assuredly harder to replace them with better things.
Peter Waterhouse, Craigieburn

A demeaning, meaningless ritual
As we are faced with the prospect of decades more of de facto monarchical rule, there are those who point to Donald Trump in America and disavow a similar governmental model. Yet, the institutions in the US are holding.

What we must bear in mind is that in our system, the governor-general did not prevent Scott Morrison’s excesses. This was accomplished smoothly and democratically by the will of the Australian people in an election.

Requiring our government ministers to swear allegiance to a distant foreign king is not only demeaning, it is meaningless.
Rose Marie Crowe, McKinnon

We tremble at a tiny thought
With no fuss Barbados became a republic this year and Prince Charles, as he was then, cheerfully attended the party. Here in Australia, meanwhile, we tremble at the thought of not putting him on our $5 note.
Greg Pyers, Daylesford

Last year only an energetic campaign from historians, supported by The Age, secured emergency funding to preserve decaying records at the National Archives. The National Library is in a similarly parlous state, with an appeal for donations on the front page of its website.

The Albanese Labor government has launched a sweeping review to inform a new National Cultural Policy by the end of the year. Adequate ongoing and infrastructure funding of our major collecting institutions needs to be part of that policy.

This is a history war no one can afford to lose.
Peter McPhee, History Council of Victoria, Abbotsford

While they’re at it …
From all reports, it appears some time will elapse before the Reserve Bank updates the royal image on the Australian $5 banknote.

With the design and artwork on hold waiting for the official portrait of King Charles III to be approved, an opportunity arises for the Reserve Bank and the Department of Treasury to take time in considering another currency update. Surely it’s time to replace Mary Reibey’s image on our $20 note with a more modern woman.

Mary Reibey has been adorning the $20 note for many decades. In 1792 at age 15, she was transported to Australia for stealing a horse to go riding. She died in 1855 a very wealthy woman. That was long ago in Australia’s short history.

Apart from David Unaipon’s image on the $50 note, there is no Indigenous face adorning any Australian note. Are we saying since settlement there has never been an Indigenous woman worthy of such recognition? It appears so.

If one could be identified and accepted, David Unaipon would have family company at last. And most likely Mary Reibey would approve.
Peter Whelan, Gladstone Park

Let them tap into super
Young people who have decades of work ahead should be able to put the bulk of their superannuation towards purchasing their own home.

This dramatically reduces living costs and provides the greatest security in retirement while also strengthening their buying power against older, well-heeled investors. Yet funds are instead channelled, prematurely, into superannuation, a large chunk of which is likely to be lost to “the system” later via rental payments in retirement.

It could have instead gone towards acquiring a secure asset, to be sold or borrowed against later to help fund superannuation or retirement. Investment in a home seems a better option for young people than superannuation, yet the current system contributes to enslaving them to a lifetime of rent payments and denying them the opportunity for financial independence that home ownership offers.
Emma Borghesi, Rye

If only we could see them
It’s a disadvantage that greenhouse gases are invisible. If carbon dioxide were dark green and methane a deep purple, we would be more aware and appropriately terrified of their rapid accumulation in the atmosphere.

It’s strange that many believe fervently in a god that is not only invisible but unprovable, while dismissing the reality of greenhouse gases that can be demonstrated by science to be not only rapidly increasing, but an imminent threat to everything we all hold dear.

We humans are wonderful but also quite weird and delusional.
Peter Barry, Marysville

A better option
If we convert our suburbs and towns into high-density housing, as recommended by Brendan Coates (“Quarter-acre dream a ‘problem’”, The Age, 15/9), our gardens and trees will disappear under a sea of concrete unless more open space is created.

We need to adapt quickly to a warmer world to ameliorate the effects of climate change and reduce CO2 emissions. We need far more trees and green spaces to do this and retain and improve habitat for other species.

Unimaginable suffering
According to Cambridge University scientist Donald Broom, “the pain system in fish is virtually the same as in birds and mammals”.

So, clearly, the suffering of the monster 30-year-old tuna that struggled for four long hours to escape, would have been unimaginable (“Reel thing as teen catches 135kg tuna”, The Age,16/9).

Why, then, do we glorify fisher folk who needlessly subject animals to this horrific ordeal? Would we equally glorify someone who tortured a dolphin this way – or a stray dog or cat?
Jennifer Moxham, Monbulk

And it cries poor?
The ABC has gone full Women’s Weekly with its coverage of the death of the Queen.

Sending all of those staff members to the UK to do saccharine colour pieces that could have easily been done from here using the excellent BBC feed makes some wonder why it cries poor at times.
Jeff Langdon, Smythesdale

It worked for me
I heartily endorse the sentiments in the letter “Let them leave early” (The Age, 16/9) regarding accepting back those who have earlier left formal education.

In 1984, aged 51 years, I was accepted into university (Griffith, Qld) on the basis of life experiences and post-high school qualifications gained.

I went on to teach Languages other than English for the ADF for nearly 11 years and became, I believe, a better person, thanks to that gap-separated tertiary education.
Ian Usman Lewis, Kentucky, NSW

The state should lead
My husband works for Corrections Victoria. His department transitioned during COVID (slowly) to a working-from-home mix and this briefly gained family-friendly flexibility improved our ability to manage the needs of our children.

He has recently been told that it will be phasing this arrangement out. Returning to “business as usual” is not the type of leadership we should expect to see from the public service on family-friendly, gender-equitable, flexible workplaces.

How do we ever expect to make progress on gender equality in our workplaces and community at large if government organisations aren’t leading the way?
Allison Parkinson, Wangaratta

The importance of trees
Mike Foley’s article (“Land-clearing crackdown threatens Aussie beef”, The Age, 16/9) on the restriction of land clearing and vetting of meat products to ascertain whether their production was the result of land clearing adopted by the European parliament raises serious issues for Australian primary producers.

Beneath the ice and snow in the New Zealand alps there is a red substance. It is Mallee soil blown across the Tasman more than 90 years ago during a drought – the result of denuding land of all trees in order to cultivate it.

Trees can play an important role in holding soil in place, helping the soil retain moisture, providing shade and shelter for domestic animals and habitat for wildlife. Farmers should be able to receive government assistance to “re-tree” properties while still continuing their farming practices.
Graeme Lechte, Brunswick West

What a turn-off
I switched off Q+A on Thursday night and I don’t think I have missed an episode since the show commenced.

I do not understand why the ABC would think it is appropriate to have a discussion about Australia becoming a republic before the Queen is buried. Couldn’t we at least wait a week? I support the idea of a republic and would be interested in the discussion, but this is a time for mourning.

The media are driving this conversation and I believe it is insensitive.
Joan Campbell, St Kilda

The head of state
Do those that suggest that the existing system of having an unelected monarch as our head of state coupled with the observation “if it ain’t broke …” still have black and white TV at home or have they progressed to colour?
Graeme Spurr, Westmeadows

Given that King Charles gave notice of redundancy to up to 100 staff at Clarence House could he make us redundant too?
Ross Barker, Lakes Entrance

A head of state is like insurance – the premium may go up every year, but when the unthinkable happens aren’t you glad you have it?
Jim Picot, Altona

The other king
All hail to the king, Roger Federer. Thanks for the memories.
Mandy Morgan, Malvern

Federer, a champion of sportsmanship as well as tennis.
Joan Segrave, Healesville

It might be educational
When you consider that about one-third of marriages end in divorce, I think all children should attend a wedding as part of their social studies (“Child-free weddings? I do, I do I do …”, Comment, 16/9).
John Rawson, Mernda

Furthermore
At the rate at which we’re moving to a cashless economy, rather than notes, perhaps we should be considering having King Charles’ picture on our credit cards.
Henry Herzog, St Kilda East

The manufacture of ceremonial uniforms is clearly a huge industry in the UK.
Belinda Burke, Hawthorn

Which will become redundant first, the $5 note or the monarchy itself?
Bernd Rieve, Brighton

I say “long live the King”, because I never want to live through this again.
Peter Goodrich, Ardrossan, SA

Finally
With all the fuss and blanket news coverage over the last few days anyone would think a great spin bowler had died.
Malcolm Fraser, Oakleigh South