Few Australian mothers share their daughter’s lives for 61 years in the one house, as did 90-year-old Freda Gleeson whose daughter, Margaret, died suddenly, yet peacefully on May 8. Perhaps even fewer brothers experience their sister’s love, care, knowledge and help on the family dairy farm for more than 60 years, as did Stephen Gleeson, of Purnim, near Warrnambool.

Margaret Ellen Gleeson died six weeks after a pre-COVID-19 operation on her foot. She had battled valiantly to return to health, so she could enjoy the cows, the garden, and rear calves this winter and spring.

Margaret rejoiced in living on the farm.

Baby Margaret arrived in the lives of Freda and husband Kevin, hardworking dairy farmers, in the spring of 1958, a cherished baby. In 1959, Stephen was born, completing the family. Margaret’s early joy was family and cows. Sitting at the dairy in a pusher while her parents milked, Margaret quickly disposed of any cloth book or toy and sat captivated by the cows and the drama unfolding in the ‘walk through’ dairy.

Margaret saw each cow as an individual, appreciating its character and foibles, knowing it by name. This fascination persisted throughout her life.

As an adult Margaret’s knowledge of the Jersey herd was encyclopaedic. Decades of herd history was recorded in her brain and available for discussion.

Despite her active life, Margaret was assailed by childhood contagions including measles, mumps, colds and chicken pox all in one year. Hospitalised for tonsillitis, she eventually missed so much learning she repeated grade one, moving into Stephen’s class.

Beginning secondary school at St Ann’s College, Warrnambool, in its centenary year 1972, Margaret was one of 52 students crammed into a classroom for 30. Turning 15 in form two, she grasped the opportunity to leave school.

Times on the farm were difficult, so in 1974 Margaret began working full-time in the cutting room at Fletcher Jones, Warrnambool, a job she held for 29 years.

When Margaret began at Fletcher’s there were more than 1200 employees. By the time she left in September 2003, factory closure was imminent. Although sad to leave her Fletcher’s friends, Margaret was ready to enjoy the farm and find her next challenge.

An eager and willing worker, she quickly began cleaning part time for the Sisters of Mercy and then, in St Joseph’s presbytery, Warrnambool, for 13 years. Gregarious and cheerful she would arrive early, ready for a chat before the workday began.

Margaret enjoyed travelling, ranging from a family Sunday drive to much farther afield. Beginning in the late 1970s, Margaret set off with cousins and friends, touring NSW, Queensland and Tasmania, camping from Darwin to Melbourne, visiting Expo 88 in Brisbane and venturing overseas to Hawaii.

In December 1993, she flew to London, spending over a month in the United Kingdom and Europe, enjoying the best seats at Les Miserables, scaling St Paul’s Cathedral, feeding squirrels at Kensington Palace and dressing up at 221b Baker Street, home of the fictional Sherlock Holmes. 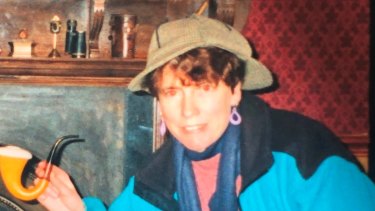 Margaret Gleeson at the Sherlock Holmes museum in London in 1993.

Despite rarely missing a workday for illness and tending cows and calves in all weather, Margaret quietly suffered from poor health.

After a painful ride on a four-wheel motorbike moving cows in late 2005, Margaret visited her doctor who sent her directly to hospital. A growth was removed and subsequently Margaret was diagnosed with ovarian cancer, an illness that had a less than 50 per cent survival rate over five years.

Facing her setback with vigour and optimism, Margaret had chemotherapy and tests in Melbourne and Warrnambool. Five years on, cleared of cancer, she celebrated her 50th birthday, although she may have been 53 at the time.

In late summer 2018, Margaret sustained a simple, but terrible farm accident, smashing her right hip and breaking her right arm. After closing a gate, she fell, hitting hard ground.

Unable to walk or drag herself along the fence, she waited for Stephen or Freda to realise she was missing.

Margaret met this horrific setback with cheerful enthusiasm. Despite knowing her smashed hip, weakened by cancer treatment was gathered together with mesh, she was determined to walk again to rear the calves that winter.

Completing her rehabilitation, Margaret found her walking stick useful for separating errant calves, which she fondly called “those little blighters” or “the little beggars” or perhaps something else when only the calves could hear.

Unfortunately for Margaret, the sarcoidosis she first suffered in 2013 reappeared in 2019. Margaret was determined to recover, following all medical advice, but she knew the risks, confiding, “This is worse than cancer”.

Margaret deteriorated suddenly during the COVID-19 lockdown and passed away with Stephen and Freda each holding her hand.

It was from this church that Margaret was buried. In non-COVID-19 times, hundreds would have packed St Joseph’s Church Warrnambool for Margaret’s funeral. Under COVID-19 restrictions, only 10 could attend – four coffin-bearers and their partners, with Freda and Stephen.

By May 14, the number doubled, and 10 friends and family were added, including Margaret’s cousin Father Phillip Gleeson, who concelebrated her requiem Mass.

Not to be outfoxed by a virus, a government directive and lack of funeral details, some locals assembled outside the churchyard. As the funeral procession left, they stood in front of their cars, lined up, between the church cattle grid and the road.

Thus, on a cold morning, in a biting wind, an informal guard of honour acknowledged Margaret, as she left St Anne’s church Purnim for the final time.

Margaret loved life and family. She will be sadly missed.

Written by Suzanne Dooley with Freda and Stephen Gleeson.